Bill Hayes’ version of The Ballad of Davy Crockett reached the No. 1 position in Billboard magazine on March 26th and stayed there through April 23rd. Bill Hayes, b. June 5, 1925, has an impressive musical, Broadway, Hollywood, and daytime soap opera career. Read about Hayes HERE.

The Ballad of Davy Crocket was the theme song for the Disney five-part miniseries Davy Crockett, which aired on December 15, 1954. The first episode was a major Disney success and by February 1955, singers were scrambling to record and release their versions of the song.

Four other versions of the song made it to Billboard magazine charts in 1955, but none of them reached No. 1. Fess Parker, Tennessee Ernie Ford, Burl Ives, and Mac Wiseman had the other renditions.

The ballad is listed in the Top 100 Western Songs of all Time by Western Writers of America.

I have a 45 rpm of The Ballad of Davy Crockett by the Sons of the Pioneers. The “B” Side is The Grave Yard Filler of the West. Due to a basement flood a few years ago, I lost the covers to all my vinyl records, but I salvaged the records themselves. Since I don’t have a record player anymore, I’m thankful for YouTube when musical nostalgia kicks in. 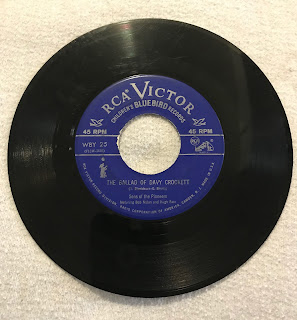 Fess Parker played Davy Crockett for the live-action Disney television miniseries, and he also sang the song as the show’s theme. Buddy Ebsen was his co-star. The show had five episodes:

Two more episodes aired, despite Crockett dying at the Alamo. In Disney’s alternate version, this episode fades to the ballad music with Crockett, the last survivor, shooting at Santa Ana’s soldiers.

With the success of the miniseries under their production-belts, Disney forged onward and released the movie Davy Crockett, King of the Wild Frontier, which is a compilation of the first three television episodes. It released on May 25, 1955.

George Bruns, a Disney legend, wrote the music. His film scores include Johnny Tremain, One Hundred and One Dalmatians, The Sword in the Stone, The Jungle Book, The Aristocats, and Robin Hood, to name a few.

Thomas W. Blackburn was an American author, screenwriter, and lyricist, who worked in the Disney story department. Writing the lyrics to The Ballad of Davy Crockett were his first musical lyrics. He wrote several novels and screenplays for movies and television: Raton Pass, Colt .45 The Adventures of Wild Bill Hickok, Cattle Queen of Montana, Johnny Tremain, Davy Crockett (King of the Wild Frontier), Maverick (several episodes), and single episodes for other popular television westerns of the time.

The Ballad of Davy Crockett was covered by a host of artists, and it ultimately sold ten million copies. The television show became wildly popular the world over thanks to Disney’s targeted marketing campaign in the UK to piggyback on the show’s U.S. popularity. It was called the “Crockett craze” in the U.S., particularly the Davy Crockett’s signature coonskin cap.

Here is Bill Hayes singing The Ballad of Davy Crockett. If the video doesn’t show on your device, click HERE.

Until next time,
Kaye Spencer
writing through history one romance upon a time 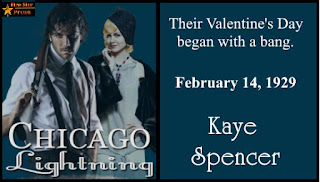