Millionaires, especially those in the Old West. There is something about the rags to riches story that seems to touch something inside of us. If they could do it, maybe we can too. Oh, the dreams. However, those dreams did become a reality for many, even those who helped make the multi-millionaires.

Verner Z. Reed and his wife Mary Dean Johnson Reed made quite a difference during their lives.

Reed, born 1862 in Ohio and raised in Iowa, worked on the family farm to help the family, which consisted of thirteen children. Originally, Reed began his career as a journalist in Chicago at the Times. He later moved to Colorado Springs, Colorado when his half-brother came seeking a cure for his TB.


It was in Colorado that Reed flourished. He saw a need for housing in the new town of Colorado Springs and created a business, Reed Brothers, along with his father and brother to build houses. He also wrote promotional brochures for the city.

In the 1890s as Cripple Creek was booming he took on promotional duties there. He also worked with Winfield Scott Stratton. It was with Stratton that Reed’s life took on new aspects. Reed helped broker the sale of Stratton's 'Independence' mine to an English syndicate. As a result of his efforts, Reed garnered one million dollars for his work. Building on that initial million, Reed soon invested in mines, while continuing to help Stratton invest also. When Stratton helped the founders of the Portland Mine, which is still producing gold, it was Reed who helped in the purchases of nearby mines.

The year of the sale of the Independence, 1893, Reed married Mary Dean Johnson who had moved from Ohio to Colorado Springs. At the time of their marriage Mary was eighteen and Verner had just turned thirty. The couple had three children.

The couple spent much of the early part of the twentieth century in Europe but returned to the states around 1912. The settled in Denver. Reed continued to invest in real estate, oil in Wyoming, and was appointed by President Woodrow Wilson in 1917 to the Special Mediation Commission. The Commission was developed to deal with the industrial labor trouble.

Below is an article from the July 14, 1917, Denver Labor Bulletin 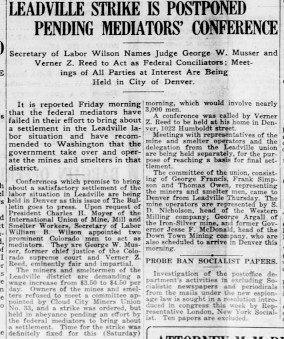 After his death in 1919 he left an estate worth around twenty million. Mary donated money to various philanthropic endeavors. Even with all she'd done, it was said she added another six million to the estate by the time of her death in 1945.

Reed also was an author with such books as: Lo-To-Kah, 1897, Tales Of The Sunland, 1897, and Adobeland Stories, 1898 based on his interest and study of the mythology of the Indian Tribes, primarily the Utes and Pueblo Peoples. You may still be able to find these books online or in libraries. The views of someone who lived at this time in history are fascinating.

Mary and Verner Reed left their mark on their world. This short post only touches on a small part of their lives. So much for further study.