Left-Handed with a Pencil - Interview with Vonn McKee

The final post for March's National Women's History Month is with Vonn McKee. Not only is she a wonderful writer, but she is also an amazing musician and so much more. I've enjoyed learning so much about and from the talented women in this series. Each of us has something we can share and I have appreciated the response from everyone from the authors to those who comment and share their stories and insights. So, without further ado, here is more wisdom to glean from the woman who is, as her tagline says, " Writing the Range".

When did you realize you wanted to be a storyteller as a writer and musician?

Honestly, I was far down the writer/musician path before I realized what was happening. I was a scrawny asthmatic kid with a big strong singing voice. Go figure. I sang in church by age seven. Beginning at ten years old, I was a circuit funeral singer in Louisiana. I mean, probably hundreds of funerals! In that environment, I saw people at their most emotional and vulnerable, and I learned to observe it without reacting myself. They told me my songs brought them comfort, and that’s something I’ve never forgotten as a singer and a writer … that all of us are given gifts to be used to touch others in some way. At thirteen I joined a contemporary Christian band called the Jesus Christ Power & Light Company and, by fifteen, I was the headliner for Shreveport’s “Louisiana Hayride,” which was like a farm team for the Grand Ole Opry. I was privileged to record for MCA and tour nationally for several years, including two Opry guest appearances. Can you say, “no dating life?” That’s when I started writing my own songs, something I still do.

Entwined with all this was poetry and essay writing. During elementary school I wrote poems, one of which was published in the school newspaper. It was a clever piece, I thought, on dropping a marble during class and getting busted by the teacher. I made up whimsical Ogden Nash sorts of words. Would you believe the editor “corrected” those words, completely destroying the rhyme scheme? Sheesh. That wasn’t my last tangle with an editor, by the way.

My seventh-grade English teacher was the first to suggest I should consider writing as a career. Sometimes it only takes one person to encourage you to do the thing you’re meant for. 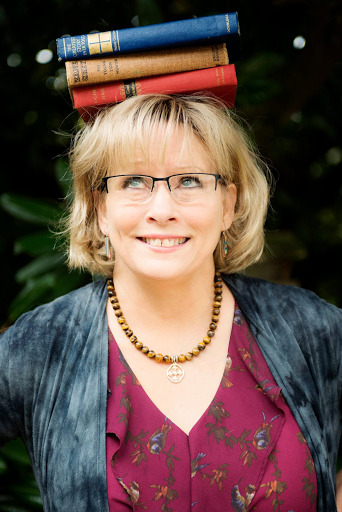 Did you chose the genre you write in or did it choose you?

I grew up in the Deep South, surrounded by stories and porch singings and plenty of Tennessee-Williams-type relatives. (Gee, I hope none of them read this.) My dad, however, was born in North Dakota and he and his Oklahoma-born father broke and sold horses. They were cowboys at heart and I got to spend summers on the family farm in northwestern Minnesota soaking up what I considered to be the Western life. In the kitchen, my grandmother told me stories from her childhood that rivaled those of Laura Ingalls Wilder.

I had a complete set of Zane Grey novels by the time I was eighteen and was writing a few cowboy songs. Fast forward to about 2012: I started going to writing conferences and eventually met Troy D. Smith, who asked me for some Western material. And off I went.

What was the nudge that gave you faith that you could and wanted to be published?

Songwriter Don Schlitz accepted his first CMA award for the Kenny Rogers recording of “The Gambler” by saying, “This is the first song of mine that anybody ever recorded, and I find all this very encouraging.” Although I didn’t kick off my literary writing career with a smash hit, my first short story published on Troy Smith’s Trailblazer imprint, “The Songbird of Seville,” was a WWA Spur finalist (2015). The same year, my second story, “The Gunfighter’s Gift” was a Western Fictioneers Peacemaker finalist. And I naively thought, “Hey, there ain’t nothin’ to this!”

I have since learned that no one has a Midas touch. It’s a little bit about talent and a lot about working hard to perfect your craft and also getting out and networking.

Is there a writing routine you follow or do you write when the muse strikes?

I’m a high-ADHD multitasker and discipline is a constant challenge. Also, I have many writing irons in the fire. I just finished judging for the Spurs (historical fiction) and am about to judge a short story contest. I’m a contributor and proofreader for Roundup magazine. Requests for short stories pop in, and I’m working on a novel. I belong to a writers critique group and I’m writing songs for a Western recording project. So I just try to spend time every day working on one or more of those. Just keep moving forward.

Is there a process where you find your next idea or does it just hit you?

Ideas are never a problem. It’s the getting them written that’s tough. Right now, I have four or five book ideas queued up in my head and, unfortunately, I’m a slow writer. The ideas spring up from research or sometimes from meeting someone. No kidding, people “bring” me stories all the time. My WIP was inspired by reading about artists like Albert Bierstadt, George Catlin and A.D.M. Cooper, who beautifully documented the 1800s Western landscape and people on canvas.

My anthology, Comanche Winter, was released on Wolfpack last year. Those stories are all over the place. A schoolboy has to defend his classmates against a Comanche attack. A circus troupe is caught behind enemy lines during the Civil War. An outlaw unwittingly steals a preacher’s identity.

Do you ‘interview’ your characters before or at any time while telling their story?

Most characters show up with at least the essence of who they are and the story they wish me to tell. But I don’t like to start writing until I know them down to their bones. This is especially crucial when writing short stories. My goal is to make the reader feel very intimate with the character(s), as soon into the story as possible.

It’s all about believability and emotion with me. I work hard to stay accurate with historical and other details, but every story or song has to leave the reader or listener with an emotion. I’ve been told I write “with an ache,” and I do tend to write characters who carry both sweetness and pain inside them.

Is there anything you feel people would like to know or would be surprised to learn about you?

Gosh, I don’t assume anyone is interested. But, let’s see. I’m left-handed with a pencil but ambidextrous with most other things. I play baseball equally bad with either hand.

I have an engineering degree and worked in commercial construction as a precast project manager for several years at a time when there were virtually no women in the industry, so I have building babies across the Southeast. I’ve been a volunteer naturalist at a park and I’m a botany/zoology/astronomy nerd.

Do you consider music poetry and does the rhythm translate into your other writing?

Oh, I like this question. When people comment that I have a background in wildly different fields, I explain that I see countless parallels in music, math, architecture, and stories. Good design incorporates rhythm or pacing (visual or audible), color (even words have this!) and climaxes or highs and lows. And things have to add up at the end!

You’ve planned WF Conventions. What prompted you to take that on?

Well, when WF members first mentioned wanting to have a convention, I threw out a few suggestions. Next thing I knew, I was named convention chairman! (You know who you are, Cheryl Pierson.)

I’ve often said that every single thing you learn will be used later, eventually. I enjoy throwing big gatherings and have cooked for 50 people all by myself a number of times. Laying out a spread and making sure rooms and tables look good may or may not be a Southern thing. Also, my years working as a project manager taught me to break down a project into schedules, logistics and inventory needs.

That said, I nominate Cheryl Pierson to be chairman of the next WF convention.

To aspiring writers … first, read your arse off. See what good, and bad, writing looks like. See which genre lights you up. Romance? (I leave that to the professionals.) Historical fiction? Nonfiction? Juvenile/YA? Mystery? Straight-up Western?

Read a few (but not too many) books on writing. Some of my favorites are How to Read Literature Like a Professor by Thomas C. Foster and On Writing by Stephen King. I loved Alexandra Sokoloff’s Screenwriting Tricks for Authors because it taught me about storyline pacing and to conjure up mental pictures of every scene as I write it.

Go to where other writers are. You’ll meet someone at every conference who will help you on your path. Might even be your next publisher. At the very least, you’ll spend time among your tribe.

Then, start typing. Yes, the page will be blank. And, no, you won’t have any idea what you’re doing. None of us did when we started. And some of us still don’t but we write anyway.

And to my younger self, I would say, “Have faith. It’s going to work out okay. But PLEASE don’t marry that curly-haired guy from California.”

For more, check out the following links:

Thank you to everyone who has been so gracious to take part in these interviews. I have enjoyed and appreciated every one of you.

See you all in April for more from our Western Fictioneers Members. Be safe, stay well, and keep those fingers moving.