Saint Patrick’s Day marks the death of the patron saint of Ireland. The Irish have observed this holiday for over 1,000 years, so if any of your characters are of Irish descent, they’d have celebrated it. You probably know at least one of the myths about the man—that he drove the snakes out of Ireland (there weren’t any to begin with … shhh!). And I’m sure you’re familiar with that most flamboyant of traditions, the St. Paddy’s Day parade. Believe it or not, the first St. Patrick’s Day parade wasn’t held in Ireland at all, but in America—and before the country was even officially founded. 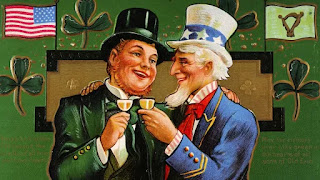 Records show that on March 17, 1601, Irish Vicar Ricardo Artur organized a St. Patrick’s Day parade in the Spanish colony later to become St. Augustine, Florida. Then, in 1772, homesick Irish soldiers in the English army marched in a parade in New York City. Enthusiasm for the St. Patrick’s Day parade only grew from there. Over the next 35 years, Irish patriotism also grew, prompting the rise of so-called “Irish Aid” societies like the Hibernian Society and the Friendly Sons of St. Patrick. In 1848, several of these societies in New York banded together to organize one official parade. Today, it is the world’s oldest civilian parade and the largest in America.

The St. Paddy’s Day parades were often political in nature. The Fenian Brotherhood often took front stage in organizing the parades, and would-be political leaders marched or observed the celebrations. In 1866, for example, in Montana Territory, the Irish settlers focused much of their attention on acting-governor Thomas Francis Meagher, who was presented with a medallion badge by the Nevada Fenians in Virginia City. Meagher delivered a well-received oratory entitled “The Land of Our Birth and the Land We Live In,” followed by a poetry reading “elucidating the fervent patriotism of the Irish peasantry.” An amateur chorus closed out the first part of the celebration by singing a tune to the melody of St Patrick’s Day and that evening, the People’s Theatre was packed with celebrants eager for the play, The Colleen Bawn (first performed in 1860 and still popular today). 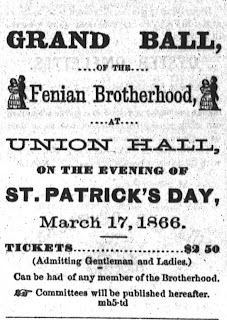 In California, celebrations ranged from the reading of poetry to marches and dances, organized by the Fenians. They were justifiably proud of their Grand Ball, held at Union Hall in San Francisco and open to any member of the brotherhood. They even took out advertisements in the San Francisco Chronicle in the days leading up to the event. On the day itself, a parade began at Union Square at 10:00 am, led by the Jackson Dragoons and including a host of Irish groups and societies. Represented were the Fenian Brotherhood, the Hibernian Society, the Irish-American Benevolent Society, the Sons of the Emerald Isle, and St. Joseph’s Benevolent Society (to name a few). Each society was accompanied by a band and members donned bright regalia and carried banners promoting their group. The march ended at Union Hall and was followed by an oration and High Mass at the Cathedral at 11:00 am. Celebrations only truly ended at 7:00 pm, when folks separated to attend their respective balls.

One of the better descriptions of St. Patrick’s Day in the Old West came from a correspondent with the New York Irish-American. Naming himself only “A Boherbuoy Boy,” (which suggested he might be from the city of Limerick), the correspondent described the celebrations at Fort Union, New Mexico. The post’s isolation didn’t stop the Irishmen from celebrating, as his article showed. “There were over three hundred persons on the occasion to witness and participate in our ball—the only St. Patrick’s ball ever given in Fort Union, or, I may say, in this Territory, where, indeed, it has astonished the natives. Our ballroom (75 feet by 25) was most tastefully decorated with American flags and a beautiful assortment of paintings, and our own Irish flag, painted in magnificent style for the occasion by R.H. Davis, artist. There was also a transparency tastefully decorated with the Sunburst, the Harp without the crown … All the officers of the garrison and all the most influential settlers of the country for miles around were present by invitation, together with over one hundred and fifty ladies (not one of them Irish, there being none such as yet in these parts), sat down to as well supplied a table as any the States could furnish, and plenty of the best wines and liquors.” Unfortunately, their Mexican band was unable to perform any Irish tunes, not even Patrick’s Day or Garryowen, but the festivities lasted until Sunday morning even without the proper music. 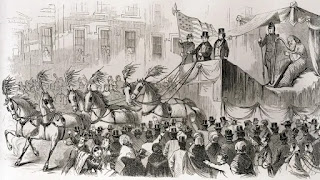 Some other traditions your characters might have noticed were:

·      The Shamrock: the three-lobed leaves were supposedly used by St. Patrick to explain the holy trinity to the pagan Celts, who had considered the plant sacred because it symbolized Spring. Later, it came to stand for Irish Nationalism.

·      Corned Beef & Cabbage: although cabbage has long been an Irish staple, corned beef is an American (and fairly modern) addition. The traditional meal consisted of lamb or Irish bacon. Irish Americans in New York City’s Lower East Side learned of the cheaper cut of meat from Jewish neighbors, and began eating it around the turn of the century.

·      The Leprechaun: probably originating as a Celtic fairy, the leprechaun (lobaircin in the original tongue) is the shoemaker to his fellows. The original clothing for the leprechaun was red, but in the 1900s green became the color associated with Ireland and that spread to include the diminutive shoemaker.

·      Pinching: The “dubious legend” states that only those who wear green on St. Patrick’s Day are protected from the mischievous fingers of the fairies, who like to pinch and prank humans. As green only became the de facto color of Irish culture in the 1900s, this is likely a more modern “tradition.”

The presence of Irish settlers, miners, and soldiers across the Old West meant that St. Patrick’s Day celebrations would have been held all across the territories. “Wherever they were in the rapidly changing world of the American West in the 19th century, the Irish made a concerted effort to publicly assert their nativity, heritage and community every 17th March.” Your characters, even if not Irish themselves, would certainly be aware of the celebrations held on St. Paddy’s Day. 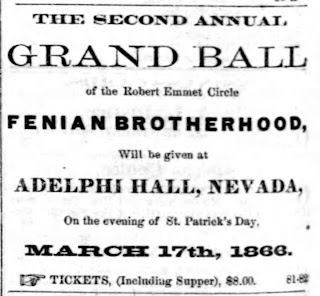