On This Day in the Old West: October 14

On this day in history, in 1834, the first publically-identified African-American inventor was granted a patent. This historic occasion would probably have slipped right past your characters’ notice, but they would have known African-Americans, inventors or otherwise. This date just shows that the country was beginning to recognize that African-Americans could come up with just as good an idea as a Caucasian inventor.

Henry Blair was born in Glen Ross, Maryland in 1807. Little is known of his early life, except that he was probably a free farmer living in Montgomery County, Maryland. He had to be free because the US Patent Office would not have granted a patent to a slave. As a farmer, he was concerned with things like planting, harvesting, and maintaining his crops, so his inventions dealt with these areas.

On October 14, Blair was granted the patent for a corn seed planting machine, which was drawn by a horse. He was the only patent-holder described as “colored.” It was later shown that, in fact, another African American, Thomas Jennings, was granted a patent in 1821 for a dry-cleaning process, but he was not identified as an African-American in the patent. Blair, unable to read or write, signed his patent with a simple X. His lack of education didn’t stop him from inventing, however.

In 1836, an article from The Mechanics’ Magazine carried a description of Blair’s invention. “A free man of colour, Henry Blair by name, has invented a machine called the corn-planter, which is now exhibiting in the capital of Washington. It is described as a very simple and ingenious machine, which, as moved by a horse, opens the furrow, drops (at proper intervals, and in an exact and suitable quantity,) the corn, covers it, and levels the earth, so as, in fact, to plant the corn as rapidly as a horse can draw a plough over the ground. The inventor thinks it will save the labor of eight men. He is about to make some alterations in it to adapt it to the planting of cotton” 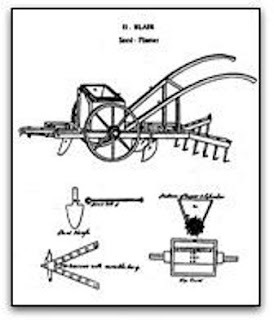 In fact, Blair did invent a cotton-planter next. When the horses drew the machine, it threw up a ridge, whereupon the tongue plow made the drill and the cylinder, revolving with the wheels, caught the seeds and let them drop into the drill. The press cover then closed the sides of the drill to cover the seeds.

Blair died in 1860 of unknown causes. Your character probably would never have heard of this man, but you could easily insert a newspaper article about his inventions into your story, or even have your character meet an African-American inventor in their own town or area.