One wonders how surgeons coped during the Civil War. After performing countless amputations on young men maimed by Minie balls, shrapnel and cannonfire how did they silence the screams and the suffering that plagued their dreams for years after?
Silas Weir-Mitchell  was a contract surgeon  with the US army in 1862 and operated on the wounded at Gettysburg and other battlefields. On his deathbed having contracted influenza he lapsed into delirium and it is said that he actually re-enacted operating on the wounded at Gettysburg. 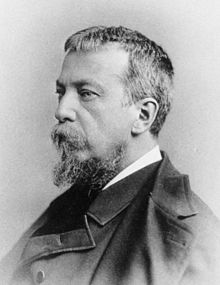 Dr Silas Weir-Mitchell (1829-1914)
He had come a long way from his wartime experiences and rose to become known as the father of American neurology. His contributions to medicine were  significant and numerous. He was the originator of Weir-Mitchell Therapy, known as The Rest Cure, a highly controversial therapy, but which for many decades became a standard treatment for psychoneurosis.
In addition to his work in neurology, he was a scientific physiologist, a medical writer, poet and novelist.
Early influence and rattlesnakes
Silas Weir-Mitchell was born into a wealthy Philadelphia family that had three generations of physicians.
When he entered the University of Pennsylvania he had little interest in subjects like mathematics, which he was obliged to study. He apparently occupied his time playing billiards, reading and writing poetry and dodging many of his lectures. His father, a devoutly religious man told him that "you are wanting in nearly all the qualities that go to make a success in medicine."
Whether this gave him the impetus to change or whether it was just that the actual study of medicine opened his eyes, he applied himself to his studies at Jefferson Medical College in 1848 and qualified as a doctor in 1851.
He went straightaway to Paris and studied physiology under Claude Bernard, one of the greatest experimenters of the day.

He was impressed by Bernard's maxim "Why think? Exhaustively experiment, then think."

Silas returned to the USA and worked with  another famous physician, Dr William A Hammond. They shared an interest in snake venoms and their effect on the nervous system. In 1859 they wrote a paper in the American Medical Journal on corroval and van, two substances used to poison arrows.
There is a tale that one day while working at his desk a rattlesnake escaped and climbed the chair he was sitting on and put its head over his shoulder. Quite the sort of scene so beloved by the movie-makers, he was able to make a move to escape when the snake's swaying head touched the lamp. 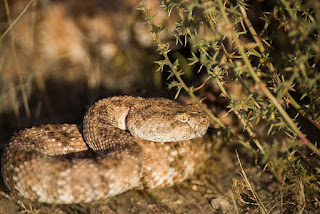 The speckled rattlesnake was named after him - Crotalus mitchellii
And frogs!
A year later he carried out more important experiments using frogs. He found that by feeding them sugar you can induce cataracts in the eyes. He published his findings in a paper  On the production of cataract in frogs by the administration of sugar in the American Journal of the Medical Sciences, in 1860.
The significance of this was not fully realised, as the pathology of diabetes mellitus was still ill understood. But cataracts are a well known long term complication of the condition.
The Civil War
Working with two other US army surgeons, George R Morehouse and William W Keen a vast amount of information was accumulated from the wounded brought back by them in wagons and operated upon. This resulted in a book published in 1864, written by all three - Gunshot Wounds and Other Injuries of the Nerves. 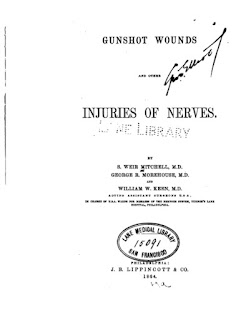 It contained the first description of  'causalgia',' an extremely painful condition now known as Complex Regional Pain Syndrome.
Phantom limb pain
After the War many amputees complained of pain, often excruciating discomfort where their amputated limb should have been. For example, they might have severe pain where they could still feel the foot that was no longer there. The year after the War  Silas opened a stump clinic in Philadelphia, where he made observations of these symptoms and he wrote a paper published  in Lippincott's Magazine of Popular Literature and Science, in which he described for the first time phantom limb pain. He speculated that it was the result of injury to the nerves during the operation.  This is hardly surprising considering that in those days when chloroform was new and in short supply a surgeon had to operate swiftly. The operative technique was gradually improved with better results, yet still the problem occurs.
He was  quite correct about the cause, but there was little that could be done for the condition, as there were few effective drugs. Although we have a  better understanding of this phenomenon now and a greater range of therapeutic interventions, yet it is still a significant problem for many amputees.
The Weir Mitchell Rest Cure
I need to mention the Rest Cure that he popularised and which Sigmund Freud ad other European doctors were critical of. Essentially, Silas was highly interested in hysteria, from his work with soldiers. Indeed he frequently alluded to the fact that brave men in the heat of battle could develop paralysis. This he distinguished from malingering, which is also mentioned in the book.
There was great interest in hysteria and other neuroses in the nineteenth century. His Rest Cure consisted of complete rest in a room, during which the patient should do no work, except write their life history. A little light exercise was permitted and a 'nutritious' diet with a high fat intake. The patient had to drink two litres of milk a day. Electrotherapy was also used, as was a form of psychotherapy.
A final word on the latter, which seems to have been direct and authoritarian confrontation. Let me cite one case.
A patient was thought to be dying and he was sent for. He immediately sent the attendants out of the room and came out shortly after. They asked if the patient had any chance of survival, to which he replied that she would come out of the room within a few minutes. Surprised they asked how this was possible. He replied that he had set her bedclothes on fire.
Apparently the Rest Cure had huge numbers of successfully treated cases and as I mentioned at the beginning it was the standard treatment for psychoneurosis for many decades.
Poet and literary man
Silas Weir Mitchell is something of a paradox. In appearance he was often described as looking like Uncle Sam. He could be irrascible, but he was also compassionate. And he had a love of literature and poetry all his life.
In addition to his medical and surgical writing he penned many novels, some of which were highly successful. So too, his poetry, which ranged over many subjects. I leave you with one.
A DOCTOR'S CENTURY
READ AT THE CENTENNIAL DINNER OF THE COLLEGE OF PHYSICIANS OF PHILADELPHIA, 1887. A DOCTOR'S century dead and gone! Good-night to those one hundred years, To all the memories they bear Of honest help for pains or tears; To them that like St. Christopher, When North and South were sad with graves, Bore the true Christ of charity Across the battles' crimson waves. Good-night to all the shining line, Our peerage,—yes, our lords of thought; Their blazonry, unspotted lives Which all the ways of honor taught. A gentler word, as proud a thought, For those who won no larger prize Than humble days well lived can win From thankful hearts and weeping eyes. Too grave my song; a lighter mood Shall bid us scan our honored roll, For jolly jesters gay and good, Who healed the flesh and charmed the soul, And took their punch, and took the jokes Would make our prudish conscience tingle, Then bore their devious lanterns home, And slept, or heard the night-bell jingle. Our Century's dead; God rest his soul! Without a doctor or a nurse, Without a "post," without a dose, He's off on Time's old rattling hearse. What sad disorder laid him out To all pathologists is dim; An intercurrent malady,— Bacterium chronos, finished him! Our new-born century, pert and proud, Like some young doctor fresh from college, Disturbs our prudent age with doubts And misty might of foggy knowledge. Ah, but to come again and share The gains his calmer days shall store, For them that in a hundred years Shall see our "science grown to more," Perchance as ghosts consultant we May stand beside some fleshly fellow, And marvel what on earth he means, When this new century's old and mellow. Take then the thought that wisdom fades, That knowledge dies of newer truth, That only duty simply done Walks always with the step of youth. A grander morning floods our skies With higher aims and larger light; Give welcome to the century new, And to the past a glad good-night.
My latest novel, written under my crime and historical writing name of Keith Moray is an historical crime novel. It is entitled DEATH OF A POET and  is the first in the Ancient Egypt  Murder Mysteries series set in Alexandria in the Ptolemaic era. It introduces Overseer Hanufer of Crocodilopolis 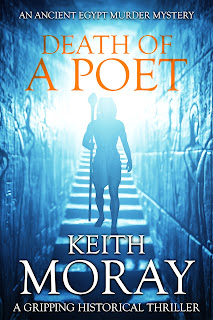