Prairie fever, sometimes called prairie madness, was often attributed to people living in isolation on the prairies of the Great Plains. It mostly struck women, it seems—perhaps not surprising, since men often found reasons to get away from home, even if it was just a trip of a day or two into the nearest town for supplies. Women on the Plains, though, were more or less stuck at the house. Prairie fever is claimed to have caused intense depression and sometimes suicidal or murderous impulses. It’s been a staple of prairie fiction for years, from Laura Ingalls Wilder’s These Happy Golden Years to Glendon Swarthout’s The Homesman (and the film made therefrom, as well as the more recent film The Wind), and James Michener’s Centennial.

Various explanations for the syndrome have been offered. Loneliness, solitude, the near-constant wind, the lack of trees or really anything to look at except incredibly vast emptiness. The sufferers were, for the most part, people who had moved west from somewhere else—somewhere likely more crowded, where one could see neighbors’ houses, trees, maybe even rivers, lakes, or the ocean. Having decided to pull up stakes and head toward the sunset, they found themselves living isolated lives, often in sod huts, in circumstances they could not have imagined.

Yes, Indigenous peoples had lived out there before, but they tended to live in groups, with extended family and other members of their tribes. And they were born on the prairies, and lived their whole lives there. They weren’t used to “civilization,” as the white newcomers were. It wasn’t, for the Indigenous people, a landscape as alien as that of Mars or Venus might be to us.

How bad was it for settlers? In The Atlantic magazine, in 1893, E.V. Smalley wrote this: “On every hand the treeless plain stretches away to the horizon line. In summer, it is checkered with grain fields or carpeted with grass and flowers, and it is inspiring in its color and vastness; but one mile of it is almost exactly like another, save where some watercourse nurtures a fringe of willows and cottonwoods. When the snow covers the ground the prospect is bleak and dispiriting. No brooks babble under icy armor. There is no bird life after the wild geese and ducks have passed on their way south. The silence of death rests on the vast landscape, save when it is swept by cruel winds that search out every chink and cranny of the buildings, and drive through each unguarded aperture the dry, powdery snow.”

Sounds enough to drive anyone mad. But is it? 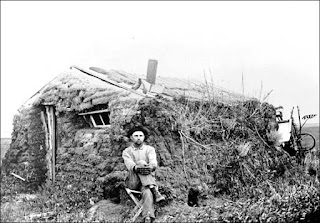 A sod house on the North Dakota plains. Fred Hulstrand

A new study has a slightly different take. It’s not the isolation or the view, it’s the sound. Or, as Smalley points out, the lack thereof.

Alex D. Velez, a paleoanthropologist with State University of New York at Oswego, put this theory to the test. Although he couldn’t study what a pioneer might have heard on the plains in 1860, he was able to find recordings from the empty spaces of Nebraska and Kansas. These, he compared to the sounds of cities like Mexico City and Barcelona.

In his summary, Velez writes, “Prairie madness is a documented phenomenon wherein immigrants who settled the Great Plains experienced episodes of depression and violence. The cause is commonly attributed to the isolation between the households and settlements. However, historical accounts from the late 19th and early 20th century also specify the sound of the winds on the plain as a catalyst. A number of conditions such as acute hyperacusis can cause increased sensitivity to environmental sounds. These conditions can result from high stress and have been known to cause behavior consistent with descriptions of prairie madness such as depression, insomnia, and violent behavior. Audiometric analysis of general human hearing patterns, combined with data on the effects of wind and open environments on hearing and communication, can be used to establish the effect of soundscapes on daily life. Thus, historic documentation and psychoacoustic analysis add to the understanding of life for settlers on the Great Plains.”

“Velez found that, while all the landscapes contained plenty of sounds humans would naturally be able to hear, the sounds of the city were more diverse, spreading more across the range of human hearing and forming something like white noise. But out on the prairie, there was little to none of that background din. And what sounds there were coincided with a particularly sensitive part of the human hearing range the brain notices more readily.

“’The way I can describe it is: it’s very quiet until, suddenly, the noise that you do hear, you can’t hear anything but that,’ says Velez.”

Velez doesn’t arrive at a definitive conclusion. Did the wind and the silence drive settlers mad? Was it the loneliness of knowing your nearest neighbor might be miles away? The stress of depending on an unknown landscape for sustenance, when before moving west you might have lived within walking distance of a butcher, a baker, and an established garden?

In my Western fiction, I typically write about southwestern settings, with which I’m more familiar. But I’ve been studying up on the Bloody Benders of Cherryvale, Kansas—seemingly a family of serial killers, which is rare enough in itself—for a project I’m working on. Did life on the Great Plains drive the Benders insane? I’m thinking not—I’m thinking they were psychopaths before they ever saw Kansas, and remained so after they left. And my Benders won’t be entirely human, so that’s another wrinkle. But having read all about prairie fever, it might be a subject I’ll return to later. Have you ever written about it? If so, please share in comments. I’d love to see how you handled it.
Posted by Jeff Mariotte at 9:04 AM