Is the western comic dead? I didn't even know it was sick. The genre is not only alive and kicking, it is expanding in new directions, as evidenced by this very unusual title from Dynamite Comics. 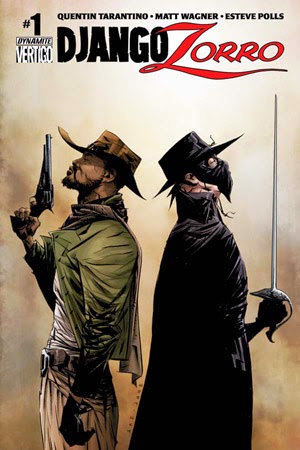 The Django in question is not only based on the character in Quintin Tarantino's movie, Tarantino supplied the plot for the miniseries, with a script by Matt Wagner and art by Esteve Polls. 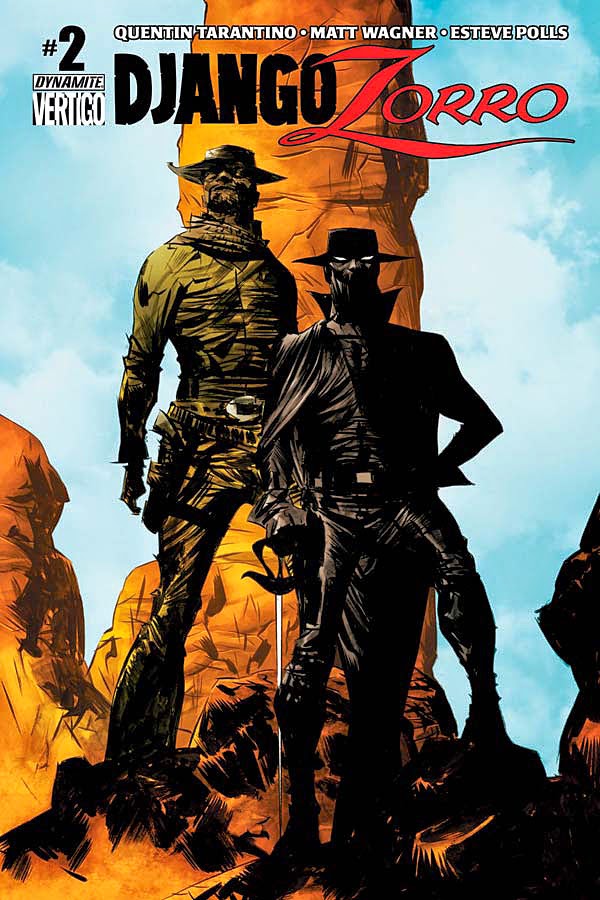 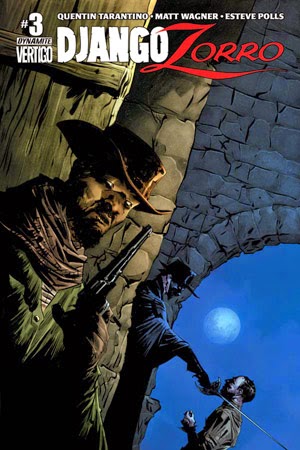 Here is the official description:

Set several years after the events of Django Unchained, Django/Zorro #1 finds Django again pursuing the evil that men do in his role as a bounty hunter. Since there's a warrant on his head back east, he's mainly been plying his trade in the western states. After safely settling his wife, Broomhilda, near Chicago, he's again taken to the road, sending her funds whenever he completes a job. It's by sheer chance that he encounters the aged and sophisticated Diego de la Vega - the famed Zorro - and soon finds himself fascinated by this unusual character, the first wealthy white man he's ever met who seems totally unconcerned with the color of Django's skin... and who can hold his own in a fight. He hires on as Diego's "bodyguard" for one adventure and is soon drawn into a fight to free the local indigenous people from a brutal servitude, discovering that slavery isn't exclusive to black folks. In the course of this adventure, he learns much from the older man (much like King Schultz) and, on several occasions, even dons the mask and the whip... of The Fox!

In anticipation of the Transcontinental Railroad, Archduke of Arizona Gorko Langdon has enslaved the natives for labor on a state-wide railway, while he waits for the United States to honor his claim as sovereign of the territory, per the Treaty of Hidalgo-Guadalupe. Learning of the archduke's injustice to the people of Arizona, Don Diego de la Vega enlists the bounty hunter Django as his personal bodyguard as he sets off to undo Langdon's schemes. All too familiar with the cruelties of slavery, Django is eager to assist Diego on this mission, though it is more political than the gunslinger prefers... even so, there seems to be more to the old fox than his fussy millionaire persona lets on.


Here are a few sample pages:

No doubt this story will soon be available in a single trade paperback edition. I for one will be watching for it!