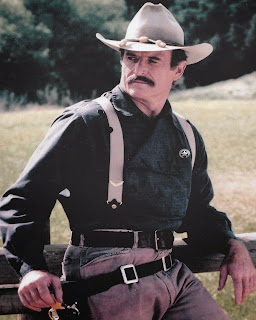 In the mid and all the way to the turn of the century, there was an area in northern  Cooke County and Grayson County, Texas called the Delaware Bend. At one time, it was known as one of the three most dangerous and deadly areas in North America sharing that honor with Leadville, Colorado and Tombstone, Arizona.
Stories are a place to hang knowledge on.


Originally part of Fannin County, it was included in Grayson County when it was established in 1846 and was finally split with the western half of the big loop in the Red River going to Cooke County in 1848. The entire area was bounded on the west with the Chisholm Cattle Trail and on the east with the Shawnee Cattle Trail.
The Shawnee—also called the Texas Trail is today known as Preston Road—used the crossing at Colbert's Ferry. It was the only decent crossing of the Red until you got to Sivells Bend in Cooke County or Red River Station in Montague on the west. It was important in that it was the primary crossing between Texas and Indian Territory from about 1850 to 1899 for both the Shawnee Cattle Trail and the Butterfield Overland Mail route.
Stories are linear in nature, but are best presented
by an abstract person. 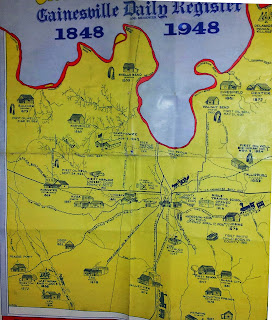 There were still Indian villages in the area when Texas declared its independence in 1836. The primary tribe was known as the Delawares. In 1842 a treaty was drawn that would exclude Indians from the land east of the Cross Timbers—an unusual strip of forest ranging from five to thirty miles wide that ran from the Arkansas River on the north some four hundred miles south to the Brazos. Well, it seems the Cross Timbers and the land west ran smack dab across the Delaware Bend.
The area rapidly became a haven for outlaws and rogue Indians. Joe T. Roff, son of one of the early settlers wrote in his memoirs the following:
"While the great majority of the people were of the type spoken of, yet many renegades from the States had drifted into the Indian Territory to avoid the laws of the States. There were bold cattle and horse thieves to be dealt with, but when the honest people could not be protected by the law, they appealed to the first law of nature and made and enforced their own laws." - Joe T. Roff
History is not always what it seems…it's what whoever
wrote about it wants it to be.

There were many sightings of William Clarke Quantrill, Bloody Bill Anderson and later, the James Gang in the Bend area in and around the town of Dexter. The natives tell the story that Jesse would give some of the local boys fifty cents to keep an eye out for posses.
When someone begins a conversation…'I may be wrong'...Rest assured
they don't think there's a chance in hell.

Dexter was a booming town until the railroad from Denison to Gainesville and points west went south through Woodbine instead of Dexter as was projected—the town kinda died on the vine after that. But that's another story. 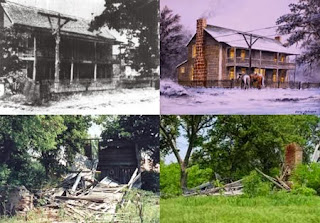 Dexter Hotel - Then and now

Here's some pics of the Dexter Hotel, both back in the day and recently. It was still standing seven years ago when I was up in that part of the county doing some research…it looked haunted.
A Colonel W. D. Young owned much of the fertile land along the river bottom, including a settlement known as Shawneetown. He turned it into a landing for cotton barges. He also served one term as a US Marshal and is known in Texas history as a Confederate hero who was ambushed Oct. 16, 1862 in events leading up to what is known as the largest mass lynching in American history—The Great Hanging in Gainesville, Texas.
Writers learn to write by writing.

The Delaware Bend remained a gathering area for outlaws on the scout until the Lee Gang—brothers, James, Pink and Tom, along with Ed Stein—with their huge rustling operation, were shut down. James, Pink and Tom are key antagonists in our latest Bass Reeves novel, "Across the Red". 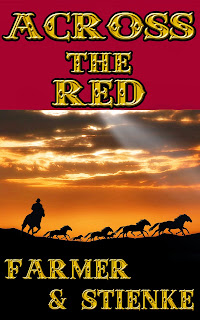 What's left of Delaware Bend—at one time some of the best farming land in Texas—now lies under Lake Texoma.  There are a couple of houses and a feed store still left in Dexter along with a very interesting cemetery and the pile of old boards and a brick chimney that once was the Dexter Hotel.
Look at your tracks and acknowledge what you have
or haven't done.

Continuing on with the next installment from my DICTIONARY of EMOTIONS

PRIME: FEAR
BELLIGERENT - Hostile, eager to fight.
Secondary:
ACERBIC - Bitter and sharp in speech , manner or temper.
ACID - Unpleasant disposition.
ARGUMENTATIVE - Given to arguing; disputatious.
BELLICOSE - Pugnacious; warlike in nature.
CENSORIOUS - Tending to be critical.
CONTENTIOUS - Quarrelsome.
CRUEL - Intentionally causing pain or suffering on others.
CYNICAL - Believing all people are motivated by selfishness.
DISPUTATIOUS - Given to dispute.
INDIGNANT - Feeling angry due to some injustice.
MALIGNING - To speak evil of; to defame.
MALEVOLENT - Exhibiting ill will.
MORDANT - Bitingly sarcastic.
SARDONICLY - Scornfully mocking.
SARCASTIC - Given to cutting, ironic remarks.
SPITEFUL - To be mean or evil toward another.
VENGEFUL - Desiring vengeance.
VINDICTIVE - Vengeful; spiteful.

C
PRIME: LOVE
CHARMED - Attracted to or fascinated with; delighted and pleased.
Secondary:
ABSORBED - Totally mentally concentrated; engrossed.
ALLURED - Enticed by charm or other attraction.
BEGUILED - Misled, diverted; amused or delighted.
BEWITCHED - Enchanted; fascinated or captivated.
CAPTIVATED - Fascinated by something or someone.
DELUDED - To deceived the mind in judgment of.
DIVERTED - Distracted.
ENAMORED - Inflamed with love.
ENRAPTURED - Filled with delight.
ENTICED - Attracted by arousing hope or desire; lure.
ENCHANTED - Bewitched; to attract and delight.
ENTRANCED - Carried away with delight.
ENTHRALLED - Fascinated; enslaved.
FASCINATED - Holding an intense interest or attraction for.
INFATUATED - Inspired with unreasoning love or attachment.
MESMERIZED - Hypnotized.
MARVELING - Filled with wonder or surprise.
RAVISH - To overwhelm with emotion.
SMITTEN - Inflamed with love.
SPELLBOUND - Fascinated as if by a spell.