Most of the blogs I write at my website focus on 19th century and early 20th century history of the American frontier. As an Ohio native, I’ve always been struck by the number of characters from my home state who made their way west and became famous, or infamous.  Here in no particular order is a small sampling those who bought into author Horace Greeley’s advice to “Go West…” and explore the opportunities accompanying the nation’s aggressive expansion. 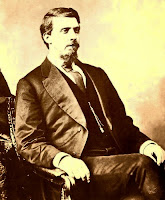 Born Oct. 15, 1838, just outside Barnesville in Belmont County, Ohio, Parker decided at 17 to pursue a legal career. He passed the bar in 1859. Two years later, he moved to St. Joseph, Missouri, and opened his own law firm. He served as a judge for the 12th Missouri Circuit and in 1870 won election to Congress.

Facing an uphill battle for re-election, Parker cashed in a few political chips and won appointment as judge of the Western District of Arkansas at Fort Smith. Since his predecessor William Story was impeached for bribery and forced to resign, Parker’s first challenge was to reorganize the court and weed out the corruption.

Over the next twenty-two years, Parker dealt with thousands of criminal cases, many which involved disputes and violence between Indians and non-Indians. He sentenced 160 people to death during his term. A total of 79 were executed and 43 sentences were commuted to life in prison or lesser terms. Others either won presidential pardons, were acquitted or their convictions overturned, won new trials, were set free, or shot and killed trying to escape.

Although Parker has often been referred to as the Hanging Judge, the term didn't appear until the 1920—nearly thirty years after he died.

Born Nov. 25, 1863, in Adams County, Ohio, he was also known as Elzy and by the alias William McGinnis. It's believed he traveled to the Denver area and went to work at the Bassett ranch in Brown's Park, where he met Butch Cassidy.

When Cassidy formed the Wild Bunch, he invited Lay along. The gang achieved a reputation as the most successful train-robbing gang in history. When the Wild Bunch broke up, Lay hooked up with the Black Jack Ketchum gang. And, that's when life took a turn for the worse.

An attempted train robbery, on July 11, 1899, near Folsom, New Mexico, got botched and members of the Ketchum Gang ended up in a shoot-out with the law. During the gun battle, Lay reportedly killed two sheriffs, and was wounded trying to escape. On October 10, 1899, he was sentenced to serve the remainder of his life behind bars - under his alias, William McGinnis, New Mexico Territorial Prison.

McGinnis won his freedom for helping put an end to a prison riot. After this release, Lay went to Wyoming, worked as a bartender, oil driller and amateur geologist, got married, and moved to California where he spent the rest of his life as a respected businessman. 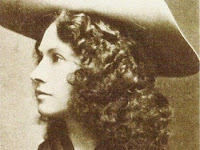 Born Phoebe Ann Mosey on Aug. 13, 1860, on a farm outside Greenville in Darke County, Ohio. She achieved fame as one of the most famous sharp-shooting entertainers of her time, touring with Buffalo Bill’s Wild West Show for several years, along with shooter Frank Butler, whom she later married.

When Annie Oakley retired, she was shocked one day to read newspaper headlines calling her destitute, a druggie, and a thief. The stories attracted coast-to-coast press coverage, thanks to two Chicago newspapers owned by William Randolph Hearst.

The 43-year old native Ohio sharpshooter retired in 1901 and moved to the New Jersey shore to enjoy retirement. She was never involved in any criminal activity or scandals of any kind. Oakley, throughout her career, spent a great deal of time cultivating a reputation as a proper Victorian lady. When the story broke, she decided to fight back.

She filed fifty-five libel suits, traveling across the country to testify in various courtrooms. Oakley settled fifty four of the suits, collecting between $900 and $27,500. Historians say she actually lost money because of her legal and travel expenses.

Born September 2, 1838, this Ohio native traveled to Leadville, Colorado, to mine for gold in the late 1850s. After making about $15,000 from his claim, Whitehill moved Southwest in 1860 where he got involved in the Apache Wars.

He put down stakes in Silver City, New Mexico and, in 1874, won election to the post of Grant County. Whitehill’s brand of justice helped him quickly bring law and order to the county seat, considered one of the most violent communities in the Southwest at the time.

Whitehill was the first person ever to arrest the young criminal known as Billy the Kid. He did it twice. Once in April 1875 and the second time in September. Known then as Henry McCarty, Billy the Kid got off with a stern lecture from Whitehill after being accused of stealing cheese or butter. But after the second arrest, Whitehill slapped him behind bars for pilfering laundry.

The Kid, however, upstaged the sheriff by pulling off the first successful escape from Whitehill's jail.

Although not as well known as his contemporaries, Whitehill earned the respect of historians for being an effective law man. He served six terms as sheriff of Grant County, interrupted by one term in the Territorial Legislature in 1882.

Born Jan. 27, 1821, in Lebanon, Ohio, Chivington—a former Methodist pastor—served as a colonel in the United States Volunteers during the Colorado War and, in 1862, participated in the Battle of Glorieta Pass against a Confederate supply train.

But Chivington’s legacy revolves around his action against a peaceful Indian village at Sand Creek in Colorado Territory, Nov. 29, 1864. On that day of tragedy, 700 members of the Colorado Territory Militia, under Chivington’s command, waged inhumane slaughter against 73 to 160 peaceful Cheyenne and Arapaho—most of whom were women, children, and infants. Many of them were scalped, disemboweled, and mutilated.

The massacre ignited a firestorm of controversy. Two of Chivington’s own officers–Captain Silas Soule, and Lieutenant Joseph Cramer, commanders of companies D and K–refused to follow the colonel’s orders and ordered their troops to hold fire.

Chivington filed three official reports, justifying the bloodthirsty attack. In one of the communiques, he boasted of attacking a “Cheyenne village  of 130 lodges, from 900 to 1,000 warriors strong,” killing several chiefs, and “between 400 and 500 other Indians.” The reports were blatant hogwash.

Chivington’s actions triggered several investigations. Despite recommendations to punish those involved for “these brutal and cowardly acts,” nothing ever came of it. After the war, Chivington failed as a freight hauler in Nebraska. He lived in California for a while before returning his native Ohio to farm.

In 1883, while serving as editor of a local newspaper, he campaigned for a seat in the Ohio Legislature, but withdrew from the race when his opponents focused attention on the Sand Creek Massacre. He returned to Denver to work as a deputy sheriff and died from cancer in 1894. 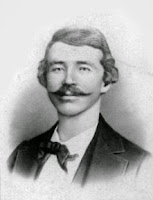 Born July 31, 1837, in Dover, Ohio, Quantrill struggled with a history of behavioral problems. He built a reputation as one of the most savage outlaws in the Civili War. A strong supporter of slavery, he joined the Confederate Army at the start of the war.

He became disillusioned with the strict regimentation of army life and with the Confederates’ reluctance to prosecute Union soldiers. As a result, he decided to wage his own war against the Union. Early in 1861, he traveled to Indian Territory, and became friends with Joel B. Mayes, the future chief of the Cherokee Nation. Mayes taught him Cherokee guerrilla tactics, which Quantrill later incorporated into his marauding style of warfare.

Gathering a band of guerrillas, he formed Quantrill’s Raiders, and went beyond attacking Union troops. They robbed trains and stagecoaches, killed supporters of Abraham Lincoln, and were also accused or murdering Union Army soldiers they took prisoner. He and his men were so savage, Union Commander Henry Halleck  issued an order in 1862 that any of Quantrill’s guerrillas captured were to be treated as robbers and murderers, rather than prisoners of war.

On August 21st of 1863, Quantrill’s Raiders attacked Lawrence, Kansas, burned down nearly 200 buildings, and murdered 150 of its citizens. It was considered one of the worst atrocities of the Civil War. The raid even triggered criticism from the Confederate leadership, which withdrew support from the marauders.

In May 1865, one of the most hated men of the west was wounded in a gunfight with Union solders and died the same day. The man who formed Quantrill’s Raiders was 30.

Born Dec. 7, 1845 in Cleveland, Ohio, Hollister moved to Kansas in his early thirties and took a job as a hotel clerk in Wichita and Caldwell. A year later, he married. On Oct. 28, 1879, he won a special election as mayor after the death of the town’s first mayor, Noah J. Dixon.

Hollister wasn’t your ordinary mayoral type. He had a few run-ins with the law while carrying out his mayoral responsibilities. Once he got arrested and paid a fine for assaulting a citizen. Despite the hassles, public service appealed to Hollister. About three years after leaving the mayor’s office he won appointment as deputy U.S. Deputy marshal.

Later, he served as city marshal and then deputy sheriff of Sumner County. At 39 years old, Hollister led a colorful life and spent much of it being a badge. But his law career put him in several dangerous confrontations. In the early morning of October 18, 1884, Hollister and two other lawman headed for a farm in Hunnewell, outside Caldwell, to arrest Bob Cross, the son of a Texas Baptist minister.

Hollister and his small posse arrived at the farm about 3 a.m., approached the farmhouse, and ordered Cross outside. His wife and sister-in-law said Cross wasn’t home. But the lawmen weren’t buying it and kicked in the front door. Two shots rang out. When the commotion settled, C.M. Hollister lay on the ground dead. Cross escaped, but authorities captured him the following day. Deputy Hollister is memorialized on the National Law Enforcement Officers Memorial in Washington, DC.

Born in the spring of 1890 with first home game played on Nov. 1st. The Buckeyes proceeded to win 35 Big Ten championships, capture seven Heisman trophies, along with a number of additional honors, including Lombardi awards, Maxwell awards, Outland Trophy, Walter Camp Award, a broad range of All-American and All-Conference honors.

Under the command  of Urban Meyer, members of Buckeye Nation traveled into north Texas on Jan. 12, 2015, to a well-fortified encampment called AT&T Stadium to pursue a band of high-flying Oregon Ducks in the first-ever 2015 College Football Playoff National Championship.

The two sides battled in a large open field with the Ducks forced to retreat under heavy firepower. When the smoke cleared, the Buckeyes emerged victorious, 42-20.

If you enjoyed this story, you'll like other quick-read true tales of the frontier in my new three-volume package, Tall Tales from the High Plains & Beyond.

Book One: The Unexpected and Other Stories is now available in soft-cover or eBook and features sixty-eight stories of the American Frontier showcasing ghosts, unsolved mysteries, lost treasures, a headless horseman, a phantom train, and others.

For a FREE SAMPLER of all three volumes, leave your name and email address at: Tall Tales Sampler. 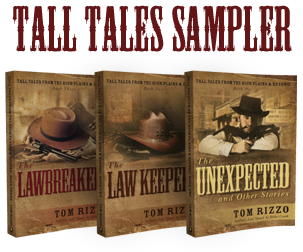