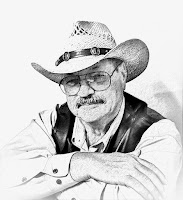 The white men found gold in the Pinos Altos mountains, northwest of the Copper Mines. As a result, when Bartlett and the commission moved on, nearly one hundred forty miners stayed behind. Of course they did not go with the commission, they were not part of the commission. But their presence upset the Apaches, especially Mangus Colorado.

Mangus Colorado, from the Apache viewpoint, had successfully removed the Bartlett party. Now he expected to remove the miners, pacifically, from Apache eyes. He spent many hours, watching the miners from cover. And he found that the white men slaved and sweated to smelt nothing more important that the yellow metal called gold or oro by the Mexicans. Anyone could see, and Mangus Colorado came to the same conclusion, that the only way to get the white men to leave the area would be to show them other places where there was more gold than at Pinos Altos.

First of all, he selected a miner and somehow made him understand that if he would go with Mangus Colorado, the chief would show him where much oro could be found.

The miner didn’t trust him. He made excuses and left. Not ready to abandon his idea, Mangus Colorado talked to another miner, making the same proposition. Again, the miner did not trust the Apache.

Undoubedly Mangus Colorado knew where there was gold. He even told the miners that all he wanted was for them to leave Pinos Altos and go into the land of the Mexicans.

They didn’t believe him. In fact, one of the miners, perhaps under the influence, suggested that Mangus Colorado be tied up and whipped. The miners thought it was a great idea, full of fun and humor. So one man kept Mangus Colorado talking while others snuck up behind him and leaped upon him, pinning him to the ground, despite his great strength.

An Act of War

The miners spreadeagled Mangus Colorado between two trees and beat him with a blacksnake whip. No one knows if Mangus Colorado made a sound, but we do know that his back was cut to ribbons. Then the miners made a fatal mistake, so to speak. After whipping the Apache, they turned him loose and jeered him as he staggered from camp. They should have killed him. It would have been much better for the white population of the Southwest had they done so. As it was, whipping is the greatest insult that could be inflicted on any Indian, much less a great chief.

Mangus Colorado would now dedicate his life to avenging his shame.

Writes Paul Wellman in Death in the Desert: “Thereafter Mangus Colorado wore a shirt to conceal the puckered weal’s. And each day he sought with savage concentration to wipe out the dishonor in blood. Never before had the Apaches seen a chief so single-purposed in destruction. Never before had they seen one who raided so incessantly, harrying the settlements in New Mexico and Arizona and even going out into the plains of Texas in search of ease for his scarred back. The White Eyes and Mexicans who died slowly, lingering out their mortal hours in agony under the Apache torment, were many. Even more were those who died quickly, in the heat of a rush, with lances running red.”

In Life Among the Apaches, John Cremony wrote of a party of Mexicans. “Each man was seized, bound to the wheel of a wagon, head downward, about eighteen inches from the ground, a fire made under then and their brains roasted from their heads. The women and children were carried off captive . . . . As I was the first to pass through Cooke’s Canyon after this affair, the full horror of the torture was rendered terribly distinct. The bursted heads, the agonized contortions of the facial muscles among the dead, and the terrible destiny certain to attend the living . . . were horribly depicted in my mind.”

Coalition among the Apaches

Still, Cochise was not anxious to go warring against the White Eyes. Raids into Mexico, fine. Then the white men cast their own die.

A white man lost his cows and his adopted son to an Apache raid. He called on the soldiers at Fort Buchanan for help, and Lieutenant George N. Bascom, fresh out of the Point, commanded an attachment of sixty men to search for the cattle and rescue the boy. At the time, there was peace with the Chiricahuas, which was proved by the fact that a stage ran though Apache
Pass without molestation, right through the middle of the Apache range. The midway station, halfway through the high narrow pass, was run by a man named Wallace, who thought of himself as a friend of Cochise. In fact, he contracted with the Indians to supply firewood to the stage station. ]

Bascom and his sixty men arrived at the station. Wallace offered to go get Cochise and tell him why the soldiers were there.

Bascom, for some reason, thought the cattle were at Cochise’s village. Then he made a fatal move. He ordered Cochise and his warriors arrested when Cochise insisted that he had neither the cattle nor the child. When Cochise realized what Bascom had done, he ran for the hills. In fact, he ran right through a phalanx of cavalrymen, along with a number of his warriors. The soldiers fired at the Indians and managed to wound Cochise. Five warriors did not make it through the soldiers and were imprisoned.

Fire from the hills around the stage station increased. Then Bascom finally realized he had a major battle on his hands. And his soldiers were getting wounded and killed by bullets from the heights.

The Overland Stage from California was late. Very late. In fact, it struggled into the station about midnight, less one horse with the driver’s leg shattered by a bullet. It was the last stage to get through Apache Pass for a long time.

Bascom was able to send a message for help to Fort Buchanan.

In the morning Cochise came with a white flag. Bascom and Wallace along with two soldiers, went out to talk to him. Apaches sneaked up on the party and attacked. Wallace and the others known to the Apaches were taken. The soldiers and Bascom escaped.

Note that the springs were about 600 yards from the stage station. Horses needed water. Two days without got the Lieutenant to send half out to be watered. The Apaches got the horses and wounded some more soldiers. Fort Buchanan sent a troop out, Captain B.J.D. Irwin and fifteen men.

Cochise plugged both ends of the pass with warriors. A train of five wagons fell into Apache hands. Five wagons that had nothing to do with the ongoing war. The Apaches killed them. Again handing them upside down on wheels and burning them alive. Irwin and his little detachment found them. Now, the Apache Wars were in full swing.

On final word, from Irwin, who went on to become a general. In his article, “The Apache Pass Fight,” he wrote:

It was then and there that it was determined to execute an equal number of Indian warriors confined at the mail station. The silly fabrication that a game of chance decided their fate is as absurd and groundless as the ridiculous assertion that I objected to their execution and wanted to take them to the post of Fort Buchanan. So far from having remonstrated against their merited punishment, it was I who suggested their summary execution, man for man. On Bascom’s expressing reluctance to resort to the extreme measure proposed, I urged my right to dispose of the lives of the three prisoners captured by me, after which he then acceded to the retaliatory proposition and agreed that those prisoners and three of the hostages taken by him should be brought there and executed, which after full and deliberate consideration was accordingly done. . . . The punishment was an extreme mode of reprisal but was demanded and justified by the persistent acts of treachery and atrocious cruelties perpetrated by the most cowardly tribe of savages infesting the territory.”

After that, it was war between Cochise and Mangus Colorado and the white man. The Apaches never really ceased fighting for a quarter of a century after that. Thousands of lives and an inestimable amount of property were destroyed because of the treachery toward Mangus Colorado and Cochise.

Posted by ChuckTyrell at 9:24 AM