A Trail of Tears

Christmas Eve, 1989, winter in Dakota. Trees explode in the nighttime cold. The moon lights the snowscape as if it were noon. And the wind sweeps across the Badlands, armed with ice crystals to attack noses and cheeks and patches of bare skin.

A tiny sun burns in the celadon sky, warming the days to 20 below. The craggy Badlands are transformed into gentle swells and hollows by a 10-foot blanket of snow; weary marchers plod over its frozen crust.

The pilgrimage began on the banks of the Cheyenne River four days ago—Native   Americans and their friends reliving the cold and the hunger of Big Foot's band of Miniconjou Sioux on its march toward death at Wounded Knee.

Four days they've struggled over the dazzling desert of snow. Four days they've taken no food and had only frozen crystals of snow for water. No fires. No heat. Just the warmth of human companionship and fusion of the spirit.

One of the pilgrims is Shonosuke Okura, heir to 600 years of Japanese Noh traditions and spirit brother to Dennis Banks, a Native American Movement leader.

"We think alike," explains Okura. "Native American rites use percussion and chants in the same kind of spirituality we experience in Noh. I took the pilgrimage to expand my spiritual horizons.

"On the journey to Wounded Knee we sought to fuse body, mind, and spirit," Okura says. "Native Americans say that only fusion can put you in touch with the primal mind; the Creator; the spirit-that-moves-in-all-things. And it can only be done by overcoming the demons inside yourself -- distraction and self-doubt."

Okura says fusion takes concentration so absolute, so pure, that there is no room for distraction and no possibility of failure. "It comes only when your goal is absolutely clear, and so important to you that you are able to transcend the limitations of your body to come in touch with the spirit of true freedom."

For Okura, Christmas Eve brought a inkling of fusion. "It was bitter cold," he explains, "the fourth day of fasting. But I felt myself rising to a more spiritual plane. The wind drifted darts of snow across the land. I could see cattle here and there, all with tails to the wind and heads held low out of its blasts. We bent into the wind, too. The Native Americans around me started a low chant, its rhythm exactly in time to our beating hearts. Slowly our bodies began to warm. And soon we were walking easily across the snow dunes, buoyed by the chant.

"That night, I slept snug in my sleeping bag . . . actually, it was the first good night's sleep I'd had. My stomach had decided it wasn't going to get fed and stopped growling. My mind was clear and unfettered. I felt that I could see every cell in my body, and I said to it 'farewell and be warm' as I went to sleep.

"It was still dark when the leaders woke us. A bonfire lit the snowscape. I tried to sit up in my warm bag, but it was frozen to the snow. So I donned my down trousers and coat inside the bag, and crawled out, fully refreshed. That morning, we drank hot broth, breaking our fast."

Three days later the pilgrim band stood on the bluff overlooking Wounded Knee Creek. There, in a bend of the stream, Big Foot and 350 Miniconjou Sioux, 250 of them women and children, camped on December 28, 1889 – 99 years ago to the day. The pilgrims made their way to Big Foot's campgrounds for the night.

As the sun lightened the sky in the predawn, drums began to throb. Chants filled the air, reminiscent of a century past. When the sun was up, the storyteller stood and told of a band of Miniconjou Sioux, headed for the Pine River Indian Agency as the agent had ordered. He told of the 500 soldiers who surrounded them, of Hotchkiss guns on the bluff.

The Indians were told to lay down their arms, which they were loath to do. The soldiers came closer. One tried to wrench a rifle from a deaf man. It went off, and the melee began. Soldiers and Indians shot, stabbed, and clubbed each other in hand-to-hand fighting. Big Foot and most of his chiefs fell to the soldiers’ rifle fire. Then the soldiers fell back to let the 1.65-inch Hotchkiss guns pour 50 rounds a minute into the fleeing Indians.

Carnage reigned. At least 150 of Big Foot's band died, mostly women and children; some 50 were wounded. The soldiers lost only 25, with 39 wounded.

"We have come," the storyteller proclaimed, lifting his arms toward the heaven. "We have come." He surveyed the pilgrims who stood in a circle around him, hands clasped in fellowship. He spoke once more, echoing Dee Brown's words. "We have come . . . over a trail of tears . . . to bury our hearts at Wounded Knee." 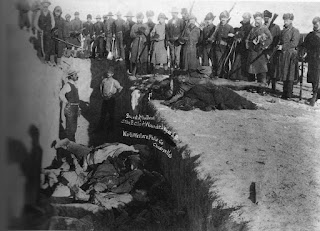 This article was selected for a prize in the annual Writer’s Digest competition.