I had no idea that three days ago, Darryle would post about western films. But hey, it's a great subject. And I've always wondered if a lot of beginning writers believe that watching old movies will give them plenty of research material. Oh ye of little knowledge! Read my lips -- Hollywood almost always shows a skewed view. A VERY WRONG view. And no. This post is not all about (ahem) boobs. It's about costumes. And exposed flesh. AHEM. 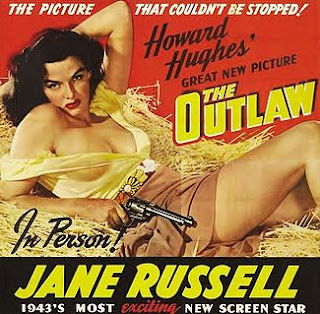 Need I say more? I mean, this movie poster is just totally wrong in all ways. Yes, Jane, you had a brain, but Howard Hughes exploited -- you in your first film. The censors had a field day over her assets, which "hung over the picture like a thunderstorm over a landscape. They were everywhere." The soldiers had a field day, too, with Jane as a pin-up. Here's more to read about Jane and her jugs: Jane Russell in The Outlaw

One of my favorite things to do when watching western films is noting all the wrong-nesses in these movies. I have no idea who is to blame, since there were plenty of wonderful costume experts in other movies, but it's probably due to the male directors who figured a little bit of sexy, or a LOT (see poster above), would go a long way.

Okay, let's get some other examples on the table. 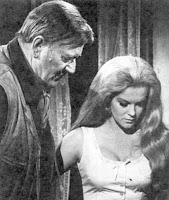 First, Ann Margret in The Train Robbers. Lovely actress. And paired with the Duke as a poor widow who wants to retrieve the gold her late husband stole to clear the family name. Who can resist, given that cleavage? The Duke's sure enjoying that view. But why is Mrs. Lowe in a room with a man who is not her husband and with her hair down? Uh huh. Maybe they're debating the ribbon and buttons of her corset cover. Hmm. 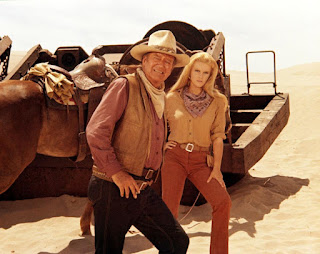 And here she is wearing "duds" like a man. Hello? Women NEVER wore pants, and if they did, they were treated like Calamity Jane -- eccentric, odd, clearly someone no lady or true gentleman would associate with -- and before you get your knickers in a twist about women working in the fields, yes. They did. In skirts. Look at how Ann Margret's hair is down (see later on for another rant). I bet she's wearing false eyelashes, too. And - and - look at that modern belt buckle, which only came into use due to Hollywood movies. Ha. 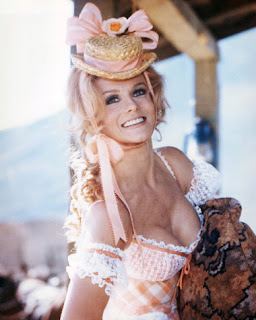 What can I say about Ann is clearly showing even MORE of her "charms" like a 1700s century woman -- when fashion had gone to the extreme -- ladies of the French court often exposed one breast. Hey, Ann might as well pop one out! Again, her lovely curls are flowing loose down her back. As for that dress, she looks ready to take out the sheep as Little Bo Peep. Whatever. Someone get her a crook. (cough bad pun cough)

Let's check out to another film, where Judy Garland stars in Meet Me in St. Louis, set in the summer of 1904 before the World's Fair. Take a listen to the "corset scene".


I bet this clip started the whole "Why do I need to wear a corset, for heaven's sake" trend for historical heroines in fiction. Writers figured, "Yeah, why? She'd be far more comfy without one!" Uh, no. First of all, going without a corset back in the 1800s would be like going bra-less in the 1970s. A sign of rebellion, all right, and what in the world are you gonna use to support those puppies? A pair of chin straps? Good grief. Everyone wore corsets in that day -- men, women, even young children. It definitely taught good posture and form. And they really aren't all that uncomfortable -- ask any historical re-enactors -- unless you're trying to achieve a sixteen inch waist like Scarlett O'Hara, which is nearly impossible without taking out a rib. Where's Doc Keith? Scalpel, STAT! 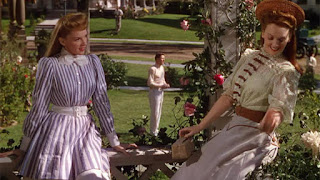 Second big thing, all the nearly grown daughters wear their hair down like young girls. A young woman of fifteen (for sure by sixteen) would be excited to begin wearing skirts down to her shoe-tops (if not the floor) and put her hair up with the fashionable styles. And these young girls in the film prance about the house in front of their father and grandfather, in their corsets, petticoats, and unbuttoned beribboned "dressing gowns". Tsk, tsk. Not that I don't enjoy watching Meet Me in St. Louis, of course, especially the Halloween scene. But you'd think they would have taken the extra few steps. 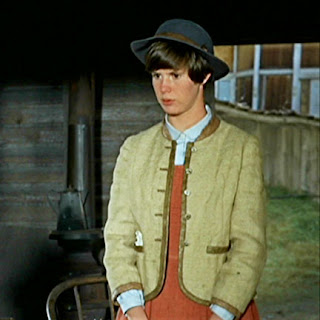 Okay, let's visit another film: True Grit, with John Wayne (sorry, Duke) and Kim Darby -- who was too old at twenty to play a 14-year-old. She also looked like a boy. What's up with that? Couldn't she have worn a wig? Or pigtails, like Hailee Steinfeld in the latest and far more accurate version. Oh well. At least Kim spouted authentic dialogue. 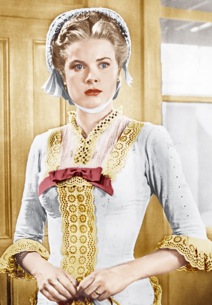 But how about Grace Kelly in High Noon? She portrays a Quaker bride (no idea what year it's set in), but she also had quite a different reputation in Hollywood than Jane Russell. Which means the costume she was given to wear proved quite tame, if not completely accurate. Sleeves would have been to the wrist, but the dress does have a high neckline. Except for the hat, which looks a bit pre-Civil War, and the lack of a real bustle. And the hot red lipstick and obvious makeup. Yes, Grace has good skin, but nobody looks that polished without powder and blush. 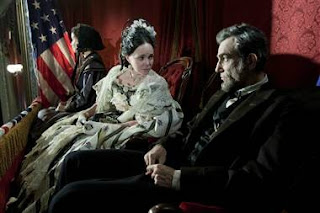 However, if you want to see perfect costuming, see Lincoln. They've got Mary Todd Lincoln's absolutely stunning gowns, based on historical museum references (and Mrs. Lincoln had a 30-inch waist, whoa!), plus President Lincoln's shabby clothing that hung on his 6'4" frame -- he really didn't care about his dress, and stored important papers in his stovepipe hat -- in direct contrast is his shop-aholic wife. She may have been homely in looks, and overweight, but Mrs. Lincoln was definitely fashionable for a First Lady. 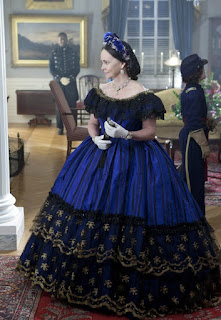 Anyone else love to laugh at the costuming gaffes for English Tudor films? Check this out and see the problems from gowns to hair to neck ruffs: 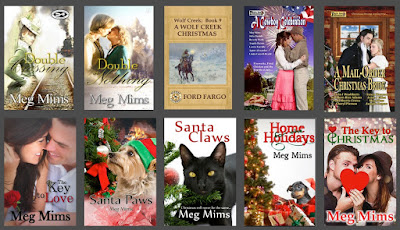 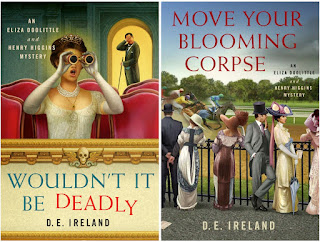 Award-winning author Meg Mims writes historical and contemporary novels and novellas, plus short stories for anthologies. She is also one-half of the writing team of D.E. Ireland for the Eliza Doolittle & Henry Higgins Mystery series. Book 1, Wouldn't It Be Deadly, was nominated for a 2015 Agatha Award and Book 2, Move Your Blooming Corpse, is set at Ascot Racecourse. Meg is working on a cozy mystery series for Kensington that will debut in 2017 under the pseudonym Meg Macy. She lives in Southeastern Michigan, loves tea, books, Mackinac Island, cookies, and currently has a sweet Malti-Poo rescue.