Well, winter has finally arrived in New England. Got out in the snow for a ride on Sunday, then went sledding, but now, with temperatures in the teens and the winds blowing 30+ m.p.h. for the next three or four days, Yankee will be in the barn at night, and I'll be in the house. 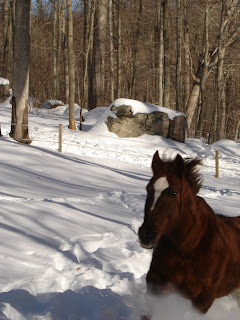 As everyone knows, I'm a writer of traditional Westerns. I love a story with lots of action, plenty of fistfights, and lots of gun battles. And where the good guys usually win in the end. However, you can't have a story with nothing but shooting and punching. I like to add some humor (although some folks would question my sense of humor) and a touch of romance. Since this is February, it's the month of St. Valentine's day and love.

Now, when I say I like a touch of romance, I don't mean any explicit sex scenes. I find it much more interesting, and romantic, for love to take a bit of time to develop. Even when one of my characters makes a trip upstairs with a saloon gal, the sex scene is almost always implied. I think it's far better to leave things to the reader's imagination than to write a raunchy, sweaty romp in the bed.

And of course, the main character in my stories would never, ever mistreat a woman. He might end up in bed with her, but it's by mutual choice, and the woman is never roughly treated.

In short, a western does need its love scenes, but it doesn't need to be like today's R rate movies. A little goes a long way, and lets the reader fill in the scene as he or she pictures it.