Cattle drives -- moving herds of cattle from one location to another on foot -- were especially important in the American west between 1866 and 1886. Around 20 million cattle were herded from Texas to stockyards in Chicago and other eastern cities. Long-distance cattle driving was traditional in Mexico, California, and Texas, and horse herds were sometimes also driven. The term "drive" does not refer to carrying, as in driving a vehicle, but to forcing the cattle to move forward.

Cattle drives had to strike a delicate balance: the cattle needed to move as quickly as possible, but not so quickly as to cause them to lose weight. Fat, healthy cattle brought the best prices at market. The ideal speed was somewhere between 10 to 15 miles in one day, with rest periods for grazing at midday and at night. This meant that a drive could take several months to complete on a long trail. One of the most famous trails, the Chisholm Trail, was 1,000 miles long, stretching from Texas to Abilene, Kansas. 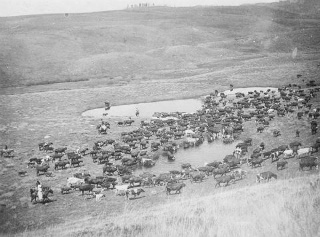 The more cattle you could move, the more money you made when you sold them at the end of the drive. A typical drive consisted of 1,000 to 3,000 cattle. With this many cattle, it was highly profitable for a town to encourage a drive to pass through, or even make it their destination once the railroads began expanding. So-called cattle towns experienced a boom between 1866 and 1890, as railroads reached them and the towns made themselves available for gathering and shipping cattle. The most famous towns were railheads, where the herds were shipped off to Chicago stockyards.

Abilene, Kansas was one of the first, and most famous, cattle towns. Other Kansas towns included Wichita and Dodge City. There were certainly other famous cattle towns, however: Las Vegas, New Mexico; Greeley, Colorado; Medora, North Dakota; Cheyenne, Wyoming; Ogallala, Nebraska; Miles City, Montana; and Prescott, Arizona are but a few of them. Texas was a frequent starting point for many drives, and Amarillo, Fort Worth, and Wichita Falls were all important cattle towns.

A drive couldn't exist without the cowboy, of course. A crew of at ten to fifteen men was needed for a sizeable herd. Each man needed from five to ten horses (ridden in shifts so that no one horse became exhausted), so a drive also included a small herd of horses, called a remuda. The cowboys worked in shifts to watch the cattle around the clock, herding them in the right direction during the day and making sure they were safe at night. Theft was a big danger, as was a stampede, when cattle became frightened and dashed away at top speed in any direction.

A typical drive would consist of the trail boss, who might be the owner of the cattle, the crew of cowboys, a horse wrangler to handle the remuda, and the cook, who drove the chuck wagon. This wagon carried not only food for the crew, but also the medical supplies and bedrolls. The cook was especially well-respected by the crew for his knowledge of food and practical medicine.

Once the herd was moving, everyone had an assigned spot. A good trail boss would rotate the positions of his crew so that no one cowboy had to ride in the most unpleasant spots all the time. First out of the camp would be the chuck wagon. This would travel in front of the herd, and usually be out of sight before long. A scout traveled ahead of the herd as well, seeking out the best routes and serving as go-between for the chuck wagon and the trail boss. The main herd followed the trail boss and the point riders to his right and left. Swing riders were positioned to either side of the herd, and were responsible for keeping the cattle bunched together, chasing down stragglers and driving them back into the herd.  To the back of the herd, in roughly the same positions as point, were the flank riders. Their job was to push the herd along, making sure they kept to the desired speed. The worst job of all was drag, which was directly behind the herd, pushing them forward and watching for stragglers. Drag riders were covered with dust and less-desirable products of the cattle, kicked up by thousands of hooves.

Here are some words of wisdom from cattle rancher Oscar Thompson to his son Webster before his first drive: