In my very first blog post for Western Fictioneers, “A SACRED PATH,” I shared some history of the old Natchez Trace, which meanders within a few miles of my house. (If you’d like to read that post for backstory of the Trace’s beginnings as a buffalo and Indian path, click here.

I mentioned that the grave of Meriwether Lewis is located at Mile 385.9, near Hohenwald, Tennessee. I was amazed to learn that the man called “America’s Greatest Pathfinder” met an untimely and mysterious demise in the dense forest of south central Tennessee.

It’s a lot like one of those “The Rest of the Story” segments written by the late radio broadcaster Paul Harvey. We all know a bit about the Lewis and Clark Expedition…that President Thomas Jefferson handpicked Meriwether Lewis (who happened to work as his personal secretary) to lead the Corps of Discovery Expedition across the great American West in search of a waterway to the Pacific.


Lewis was bright, energetic and forceful…else he would not have survived working for the obsessively organized Jefferson. In order to round out the skills needed to command such a journey, the president arranged for his aide to study medicine, astronomy, and navigational methods. By the time he assembled the Corps of Discovery team, Meriwether Lewis was quite the Renaissance man.

He recruited William Clark, with whom he had served in the Army, and their company of thirty-three men embarked westward from near St. Louis, spending more than two years battling extreme terrain, disease and hostile natives.While they were unable to find a continuous river route to the west coast, they returned with hundreds of plant, seed, and soil samples, along with Lewis’s meticulous flora and fauna illustrations and splendid maps drawn by Clark.
After dedicating years of his young life to preparing and carrying out the adventure of a lifetime, Lewis suddenly found himself without a purpose. President Jefferson appointed him Governor of the Louisiana Territory, which esssentially shackled the former explorer to a desk in St. Louis. Always prone to moodiness, Lewis proved ill-suited to politics and brokered several questionable deals that brought criticism from Washington. He began to neglect his duties and took to drinking heavily.

On September 3, 1809, Meriwether Lewis boarded a ship at St. Louis bound for New Orleans and, ultimately, Washington, D.C. He hoped to resolve financial issues surrounding his government dealings and to present his expedition journals to a publisher, although he reportedly had not completed them—even after Jefferson’s continual admonishments.

There are some reports that Lewis, in mental distress, attempted suicide on the voyage but was restrained. For unknown reasons, he changed his mind about making the trip by boat and disembarked at Memphis. He struck out overland via the Natchez Trace—a dangerous trail fraught with robbers and murderers.

On the evening of October 10, he stopped at Grinder’s Stand. (“Stand” was the common term for “inn” at that time.) During the night, the proprietess heard two gunshots and peeked through the cracks of the cabin to see Lewis crawling to the door, asking for water. She was too terrified to let him in, possibly since her husband was away. Early the next morning, October 11, Meriwether Lewis was found dead in his room with bullet wounds to his head and abdomen. He was thirty-five years old.


Most who knew him well believed it was suicide. Thomas Jefferson noted his “sensible depressions of mind.” William Clark, upon hearing the news of Lewis’s death, wrote “I fear the weight of his mind has overcome him.” It is thought that Lewis may have contracted syphilis or malaria, the latter of which can cause dementia.

Descendants of the Lewis family have long maintained that he was murdered and have campaigned unsuccessfully to have his body exhumed. (The grave is on National Park Service property.) Their claims are explained at solvethemystery.org Some scholars agree, although speculations of the murderer’s identity run the gamut from highway robbers to a government-hired assassin. They point out that Meriwether Lewis was too skilled a marksman to botch his own suicide. 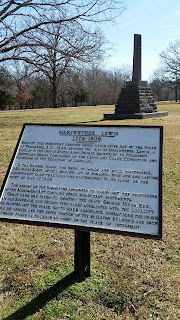 The answers lie beneath a stately monument of Tennessee blue limestone. Even after 200 years, forensics could accurately analyze the skull (if intact) for gunpowder residue and fracture patterns. DNA samples could reveal details about Lewis’s health.

We may never know the truth of Meriwether Lewis's last night on earth. Whether suicide or murder, it was a tragic and senseless end for the courageous American explorer. Rather than dwell on his final moments of suffering, I choose to picture him sitting tall in a keel-boat, journal in hand, ready to document the sights waiting around the next bend in the river.


“I could but esteem this moment of my departure as among the most happy of my life."  Meriwether Lewis

All the best,
Vonn McKee