The horse was as ubiquitous in the Old West as the automobile is today. Everybody who could afford one had a horse, and the affluent usually kept several. A handsome "turnout," or carriage and team, was a must when the wealthy wished to be seen out and about town, and even the lowly cowboy had a Sunday horse treasured for its fine appearance and behavior.

This will be Part 1 of a two-part column. 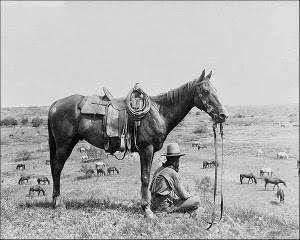 Alice Ann: a sorrel horse, probably a corruption of the Spanish alazan
Appaloosa, Palouse: a strain of spotted horses whose spots can be felt with the fingertips; considered to have great stamina
Apron-faced, Bald-faced: a horse with a white face and forehead
Bang-tail, Fuzz-tail, Fuzzy or Fizzy: there is a debate about whether these terms indicate a range horse, with plucked tail, or a mustang or wild horse instead
Bay: a deep rich chestnut red-brown color, usually with a black mane, tail and points (ears, muzzle and lower legs)
Blood bay: the brown coat has a very deep red tone
Golden bay: the brown coat has a yellowish tone
Light bay: having a light brown coat
Mahogany bay: the brown coat has a dark purple tone, usually sooty
Standard bay: the coat is "flat" without a red tinge 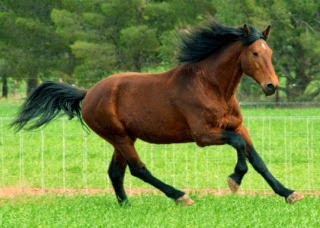 Bayo: a faded bay or dun horse
Bayo azafranado: a saffron color, between dun and sorrel
Bayo blanco: a pale dun
Bayo cebruno: a dun faded to smoky tones
Bayo coyote, Coyote dun: a dun with a black dorsal stripe
Bayo naranjado: a dun of an orange hue
Bayo tigre, Gateado, Zebra Dun: a dun with stripes around the legs or on the shoulders
Black: a true black horse will have black eyes, points, hooves, and skin; check the hairs around the muzzle and lips to tell the difference between a very dark brown horse and a black one
Blaze, Stripe: an elongated white mark on a horse's forehead
Broom-tail, Broomie: a wild horse or mustang, with a long bushy tail
Buckskin: a light brown horse (colors range from cream to dark bronze) with a black mane and tail
Calico: a pinto or paint horse or, more rarely, a dappled one
California sorrel: a palomino
Canelo: a Spanish (or California) horse of a cinnamon color; a red roan
Cayuse, Kiuse: originally a wild horse of the Northwest, the term came to mean a cow horse of mustang descent, possibly an Indian pony or scrub horse
Chestnut: a horse with a red coat, with mane and tale of a similar color and no black hairs; a liver chestnut is a very dark red 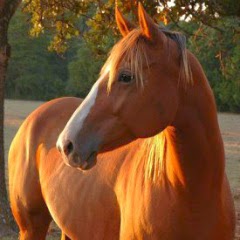 Claybank: a horse of yellowish-brown color
Cold-blooded: horses of northern descent, as opposed to Arabs and Barbs; in the West, this term could mean a cow or horse lacking good breeding
Dun: a grayish-brown color; a bay of faded, dull-brown color with black mane, tail and points, frequently with a dorsal stripe; the dun horse has a reputation for endurance
Fantail: a wild horse with an ungroomed tail; the opposite of a shave-tail
Flea-bitten: a white horse with brownish-yellowish spots
Grade-horse: mustang stock crossed with quarter horse to upgrade it, thus acquiring the ability for quick starts while retaining stamina and endurance
Gray: may look white, but skin is dark and there is dark pigmentation around the eyes, ears and nose; a dapple gray is a gray horse with darker speckles
Grullo, Grulla: dark gray color like a dove; mouse or slate-colored with black points and sometimes zebra stripes on the legs and a dorsal stripe
Hot-blood: an Arab or Barb horse; a horse with breeding
Indian pony: a small, hardy animal bred or caught wild by Indians, especially a paint or pinto pony
Line-back: a horse with a dorsal stripe 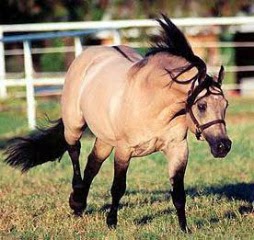 Morgan: an Eastern breed descended from Justin Morgan's stallion; a strong, lively breed which crossed well with the mustang and Spanish horse
Moro: a horse of bluish cast
Mustang: a horse descended from the original Spanish stock in Mexico; mostly small and multi-colored (not to be confused with the Spanish Horse, which was bred true)