When the thirteen-year-old boy ran from the burning house, trying to escape the attack on his
stepfather’s home, a federal marshal shot him in the back.

The posse of lawmen sent from the federal court in Fort Smith, Arkansas claimed the man they were after was a killer, the cold-blooded murderer of one of their own – Deputy U.S. Marshal Dan Maples.

The fugitive was a conservative Cherokee senator, a member of the Executive Council, a respected citizen in his community.


Ned Christie had grown up a keetowah, that sect of the Cherokee Tribe who believed in strict adherence to traditional tribal ways, their language, their religion, their education; not their assimilation into the white man’s culture as the U.S. government had insisted.

He was a man given to impassioned speeches on the legislative floor of the National Council; speeches against the incursion of the United States into the lands of their sovereign nation, particularly that set forth by the Dawes Act of 1887 which mandated the breakup of Indian lands into allotments.

But Christie had his enemies, even amongst his own. And he had a weakness: he liked to drink.

In May, 1887, Christie was in the Cherokee capital of Tahlequah to attend a Council session. One evening he and an acquaintance, John Parris, a known whiskey runner, set out to get a bottle. They ran into Bub Trainor, a local hell-raiser and another illicit liquor dealer.

Deputy Maples was also in town that night along with his posseman George Jefferson. Maples had warrants for the arrest of Parris and Trainor on charges of introducing liquor into the Indian Territory, a common felony of the time.

Maples and Jefferson had set up camp near Spring Branch Creek, which happened to be near where Christie and four of his drinking buddies, including Parris and Trainor, had decided to party.

While crossing a foot bridge on the Spring Branch late that night coming back to his camp, Maples was ambushed and killed.

Posseman Jefferson named Christie as the shooter, all based on circumstantial evidence.

Christie claimed he was innocent, mainly because he’d been in a drunken stupor, but also saying he had no gun on him, had not brought one to town.

He was willing to turn himself in if the Fort Smith court would grant him bail so he could prove his innocence, but Judge Parker refused. Not thinking he’d get a fair trial in a white man’s court, Christie fled to his home in the dense forested hills near Tahlequah know as Rabbit Trap.

Over the next two years several deputy marshals were sent to ferret-out Christie, but he always ran them off with gunfire, wounding several. In 1889 a new marshal in Fort Smith decided the stand-off with Ned Christie had gone on long enough, and sent his best deputy, Heck Thomas, to bring him in.

Deputy Thomas had his posse surround Christie’s cabin one pre-dawn morning, and called out for the outlaw to surrender.


Ned responded with a loud turkey gobble and several shots from his Winchester. A gun battle ensued.

Christie’s wife ran from the cabin escaping into the deep woods. Her son, James, stayed with his stepdad.

Deputy Thomas decided to set fire to an out-building thinking to smoke Ned out, but the flames leapt to the cabin setting it ablaze. Sometime during the fight, Christie took a bullet to the face which broke his nose and took out his left eye. The ball lodged in his back leaving him temporarily blinded and paralyzed, but the lawmen didn’t know this as young James kept firing from the cabin.


Soon the flames and smoke became too much, and unable to move his stepdad, the boy fled. He made it to a rail fence before the bullet caught him in the back. Still, he managed to hobble off into the woods.

One of the deputies in Thomas’s posse had taken a bullet leaving him severely wounded. Realizing he needed to get his colleague medical aid, and thinking Christie’s wife would soon return with re-enforcements, Thomas decided to withdraw. They supposed their quarry was probably dead inside the burning cabin.

Ned’s wife did return with help, and finding Ned still alive, pulled him out of the cabin and away to safety. He eventually recovered and regained sight in one eye. Knowing word of his survival would get out and back to the law in Fort Smith, he returned to Rabbit Trap and started rebuilding. But not just a cabin, a fortress.

With help from his confederates, Ned cleared land out to fifty yards around the site of his new bastion.

They constructed a two-story double-walled rock and log structure, the space between them filled with dirt and sand. It had no windows, just gun ports on all four sides. It was virtually impregnable.

An entourage of family and friends came to live with Ned, including his stepson, who'd also survived his wounds.

Filled with bitterness and hatred for all that had befallen him over a crime he said he never committed, Christie sent word back to the law in Fort Smith, to Heck Thomas in particular, that they should come and get him if they could. For three more years, time and again, lawmen did try to extricate Christie from his stronghold, but were always repelled. By that time a reward of $1,000 had been placed on Ned Christie’s head.

Finally, in the fall of 1892 a posse of dozens of men was formed to make an all-out assault on Christie’s citadel. They even brought along a cannon borrowed from the military.


A battle raged for more than a day. Thirty-eight cannonballs were fired at the walls, but had little effect. A dozen of the possemen were wounded.

Then in the dark of night, twelve sticks of dynamite were placed at the base of one wall and set off. The explosion blew out a corner of the fort and set it afire. Christie came charging out of the smoke and flames firing his rifle and screaming his war cries. He was cut down in a fusillade of gunfire.

The reign of what the press called the most dangerous and blood-thirsty Indian outlaw ever was over.

Because Ned Christie was the only suspect, the murder of Dan Maples was never officially solved, but in 1918 the truth came out. A Tahlequah blacksmith, Dick Humphrey, said he saw the whole thing while walking home from work on the night of May 5, 1887. It was Bub Trainor who shot Maples, and then threw the gun down near the passed-out Ned Christie, and it was Bub Trainor who’d first said Ned was the shooter. Because the Trainor family was a powerful one in the town, and because Bub was a mean SOB, Humphrey never said anything out of fear of reprisal. But now that they were all dead, and he himself was 87, he thought it only right that he set the record straight.

Though fictionalized, one of the best accounts of the Ned Christie affair is Larry McMurtry's and Diana Ossana's novel Zeke and Ned. For those who love historical fiction, I highly recommend it. 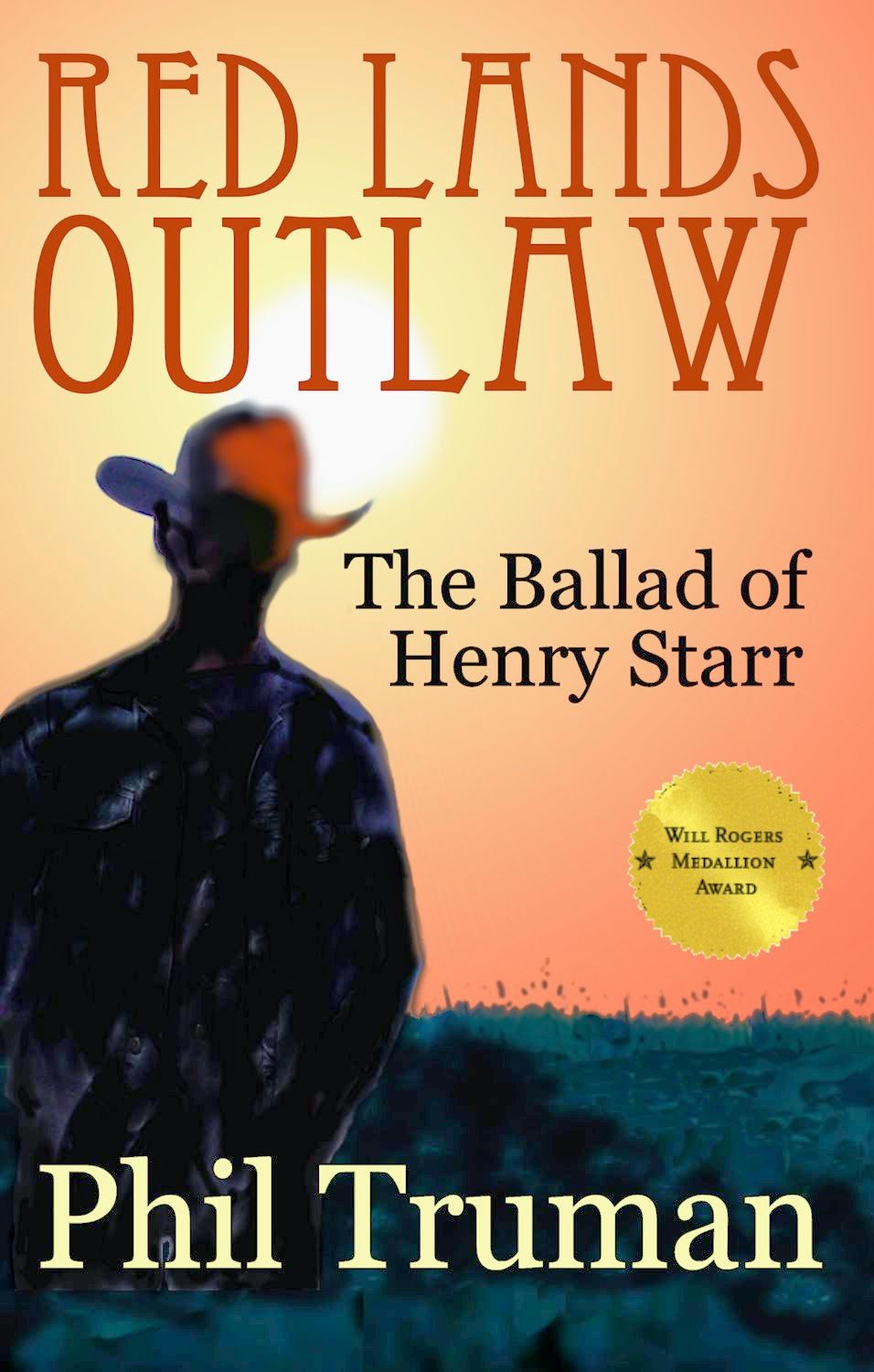 Phil is the author of the award-winning historical western novel,  Red Lands Outlaw, the Ballad of Henry Starr. His other novels include GAME, an American Novel, a sports inspirational about small town schoolboy football, and Legends of Tsalagee, a mystery/adventure in a small town. His western short story “Last Will for an Outlaw” appears in LaFrontera Publishing’s anthology, Dead or Alive, released June 2013.

Phil’s website is: http://philtrumanink.com/
Posted by Phil Truman at 4:00 AM