What do you do when you are your own worst enemy? 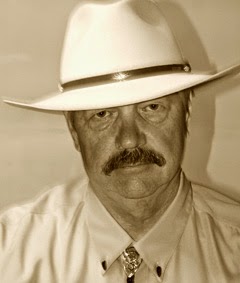 Before we get into wickedness, humor me and read the first two paragraphs of this book:

The three forks of Cottonwood Creek purled out of the foothills as sweet and clear as the Gospel and gathered together just above the town of Cottonwood, which called itself thrice blessed. Of all of life’s benefactions, water was the most important. And cool, crystal water was a blessing beyond compare. For Cottonwood, snugged comfortably on the south flank of the Unita Mountains, sweet cold water meant prosperous ranches, green fields, healthy cattle, good business in the dry-goods and grocery stores, and comfort. It was a place to sink roots.

Each winter heaped snows in layers fifty feet thick in the blue mountain canyons, and each summer these sun-chastened snows fed the three forks, giving a timeless rhythm to the area, and preserving it for the happy few who had found it to be a veritable promised land. Herefords and shorthorns and a few of the old longhorns dotted the creek banks, drinking deep on hot summer days, and wandering off to the golden slopes filled with sun-cured bunch grass to fatten and grow.

How close can you get to Eden?

And to this Eden come Truman (notice the name) and Gracie Jackson. Later than the original founders, so their land was not choice, but hard work and perseverance helped them build a viable ranch an hour on a fast horse from town.

The protagonists: Truman and Gracie Jackson. Young couple. Hard workers. Successful. They even joined the Community Church after a two-year holdout, saying they were not much interested in religion.

Then the tongue-wagging members of the community found out the Jacksons really didn’t know anything about the Gospel. Listen:

Eventually, they sought to become members, and only then did it come out, to everyone’s surprise, that they had never been baptized. Just as astonishingly, neither of them had the faintest grasp of doctrine, or had ever read so much as a chapter of the Bible. All this came to light when the Reverend Mr. Eli Pickrell routinely questioned them about matters of faith before admitting them to the congregation.

The upshot of all that was that for the better part of a year, Truman and Gracie Jackson, along with Nell, Jon, and Parker (their children) received instruction in Sunday school preceding the regular services. Truman and Gracie were the only adults in a class of a dozen stair-step children. Cottonwood buzzed with that oddity, but approved. How could it not find the gathering of two ignorant sheep into the fold agreeable?

The protagonists: The Jackson Family. 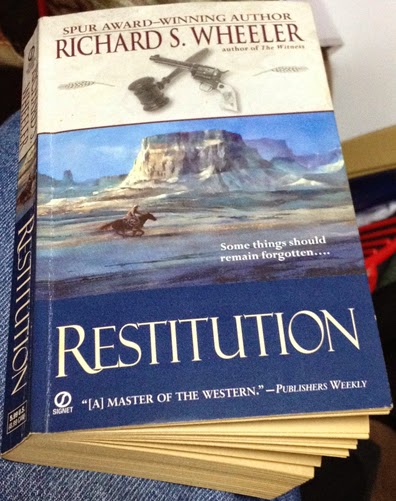 Then incongruities began to catch the eyes and ears of Cottonwood residents. Gracie’s speech patterns didn’t always match those of the well-brought-up lady. And Truman seemed almighty careful, like a man who’d spent time on the battlefield, though he said he hadn’t. But, quote: But the upright citizens of Cottonwood didn’t mind. The Jacksons were well accepted, the doors of the best homes were open to them, and whatever their backgrounds, they had transcended their origins.

Aha. Something wicked this way comes (who said that?). The past. And in this novel by Richard S. Wheeler, the past is the antagonist. The past of Truman and Gracie Jackson.

Chapter two: Each and every day, Truman Jackson wrestled with the most painful decision of his life. For over a year he fought the same battles in his soul, back and forth, without ever committing to action. He wondered how it would end, and whether he would find the courage if he did decide to act.

Truman feels he has about everything he ever wanted. Cattle, land, children, and trust—which amazed him—and honor. And he had Gracie, who had shared everything, knew every secret of the dark corners of his heart, and had walked together with him from beginnings so distant and dark that even now, that long journey astonished him. He could not have done it alone.

Then the book—Restitution—goes back to the beginning. Back to when Truman was named Will and when he had an uncle who was an outlaw, robber, thief, and killer. Will and Gracie ran, and their pasts became their worst enemies. But they became Truman and Gracie Jackson of the Eden called Cottonwood.

But now, after earning trust and honor in Cottonwood, after joining the Community Church, Truman decides he must make restitution. Pay back what he stole as an outlaw.

Truman decided to get the monkey off his back. Come clean about his past. And he made up his mind to do it at the church potluck dinner. To the pastor, he said:

“After dinner I’d like to speak to this group for a few minutes, Mr. Pickrell.”

“Oh, about making myself a better man. Doing what’s right. Answering my conscience.”

“Well, Truman, that’s odd, but it sounds uplifting. I’ll do it.”

And this is only chapter five. But now we know Truman Jackson must battle with his past until he finds redemption.

The master said, when the mob was going to stone to death the woman caught in adultery, “He who is without sin, let him cast the first stone.” How long is it going to take Truman Jackson to earn redemption for his past?

At the end of the supper, Mr. Pickrell introduce Truman and said he was going to bear witness. He did.

He told them he was the only son of Ace Dowd, robber and killer, and that his family had been the Dillin-Dowd Gang when he was growing up. He told how he held horses from the time he was fifteen until seventeen. He said his name was Will. He told about the stage robbery that went bad. How his uncle and the Dillins died. How young Will got away, but never committed another crime. He ran. He gathered up his true love and ran away from Montana, but always looking over his shoulder. He told how he ran, how he worked, how he found most people honest and fair, and how he came to Cottonwood to find the right place to live.

“Now that’s my story, and you’ll have to come to grips with it. I hope you’ll call me Truman and be my friend. But some of you will call me Will, and think no man ever changes or grows, or can be freed from the darkness of his past. That’s up to you. I have told you all this, before God and man, to make myself whole, and to begin a repayment. That’s all I have to say.”

They stared at him with uncertainty. Even the reverend gaped, and no one moved.

How much better can you set up an antagonist that that? Can Truman Jackson keep his promise? Will his neighbors let him forget the past and forge a new future? Will his Gracie be able to stick it out. And what about the three kids?

Things don’t get much more wicked than this.

Check out Chuck Tyrell books here.
Posted by ChuckTyrell at 6:55 AM