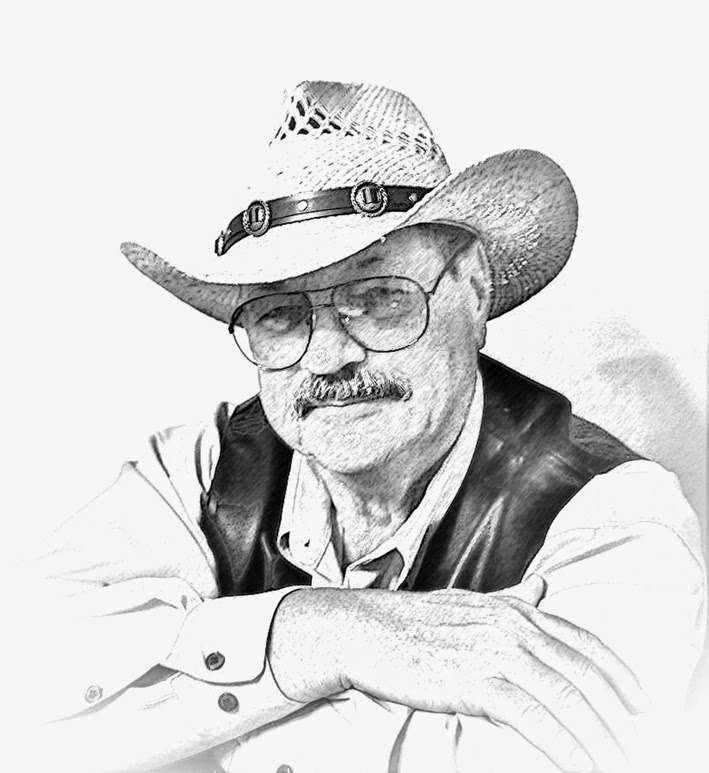 Wickedness does not always come from the antagonist of your tale. It can come from a passerby, as it were, but every passerby in a Western novel carries the possibility of evil, or at least violence.

You know I think Clair Huffaker was one of the best western writers of his era, and that era was a great one for the genre. So I picked another of his little Westerns for this month’s Wicked Wednesday. And I’ll open it with his opening line.

There were eight Comanche warriors.

Riding toward the Comanches come a man named Riot (how’s that for a name?) and another named Harry. They play like they don’t see the Indians until the last moment, and then make a run for it.

The eight Comanches turn into 14, then 20

Riot’s horse gets shot. There’s a lot of action (what a way to start a novel!) He grabs an Indian pony but can’t get his own rifle from the boot beneath is horse’s body. He gives up and runs. Eighteen Comanches follow, Harry rides ahead.

Then, after 16 pages of nonstop action, Riot gets an arrow in the chest . . . a very wicked arrow. As Huffaker puts it:

Some time later he was dimly aware that he was no longer on the horse. He was lying on the ground in the dark. He sensed trees near his side and crawled into them to be hidden, and to rest.

Here’s where the wickedness starts.

Much later, out of the inky nothingness he heard with distinct clarity, the voices of men.
“He rid near eight mile with that damn thing in ‘im.”
“You gotta say one thing for the man. He sure died hard.”
“Ain’t dead yet.”
“No?”
“Nope. Give me a hand here. See if we can get this arrow out of him.”
There was silence for a moment, and Riot had the idea that someone, somewhere, was being hurt.
“Ahh! Got it. Way the end was busted, I thought I’d never get a good enough grip.”
“You got the arrow okay. But the head come off. Damned thing’s still inside ‘im.”
And then the voices became muddled and distant and at last dissolved into nothing.

Dr. White had a look at him, then Dr. Gates, Army surgeon from Ft. Davis. He said, “Mr. Holiday, you’re in trouble. No point beating around the bush.”
“Trouble?”
Gates nodded. “You’ve got a steel arrowhead lodged next to your aorta—the large trunk artery directly above your heart. As I say, the arrowhead is steel, and it comes to a fairly sharp point. At least we can assume that. The arrow entered your chest, clanking slightly off one rib and entering deeply. Right now it’s located, as I say, next to the aorta, and directly above the right ventricle.” He hesitated and rubbed his jaw, avoiding Riot’s eyes. “Reason I’m explaining all this is because . . . an operation to remove that arrowhead would be impossible. . . . if you don’t strain yourself too much, you should with luck, live about six months.”

There you have wickedness.

The doctor said, “In due time you’ll be able to get around a little. Maybe even do some light chores occasionally.”

Riot said all that did not fit with his plans. The doctor leaves and Riot gets out of bed, dresses, and lets a girl by the name of Roslyn help him to a chair on the porch. He isn’t about to listen to Doc. Gates.

The Comanches, led by one named Blood Shirt, had gotten hold of new Spencer repeaters and are set to burn and pillage. 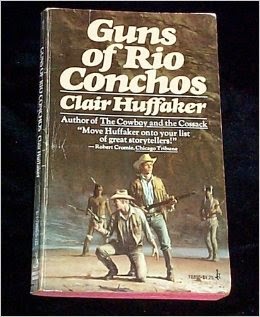 So. Riot Holliday (how’s that for a protagonist name?) is set to die in six months or so—if he takes things lightly and doesn’t work too much.

“I’m not going to die yet. I’ve got six more months and I’m going to live during the time I got left.”

But still. That arrowhead is in him. It’s deep. And it’s in position to kill him if he makes a false move. How’s that for wickedness?

Riot lives with the McCallisters, who are God-fearing and stolid folk. They offer him free room and board, but he says, “You said my clothes weren’t a working man’s. You’re right there. They’re the clothes of a gunman and gambler. Soon as I’m strong enough, I’m going out into the world and do my level best to crowd all the hell-raisin’ and fun of a lifetime into the days that are left.” Continuing, “I appreciate your offer. But I got a lot of fighting and drinking and gambling and general roarin’ around to do.”

Huffaker has a way of turning good bad men into good good men. Riot Holliday’s one of them, and that wicked arrowhead in his chest has not convinced him to mend his ways.

Blood shirt’s Comanches attacked the McCallister home, leaving the family all dead except a girl and a young son. In Huffaker’s books, nothing is ever easy.

Then the man with an arrowhead in his chest and the young man who survived the Comanche raid set out on the revenge trail.

And Riot goes on a binge.

Never trust a drinking man. Well, Riot told Thaddeus, the only McCallister man remaining alive, that he’d better not trust a drinking man like himself. And in their cups, Thaddeus—not christened Tad—and Riot discuss how little time he’s got left. Now, if that’s not wicked, I don’t know what is.

Well, a riot in the Bird Cage, yeah, must be that Bird Cage, judging from Huffaker’s description, even though the town wasn’t Tombstone, took things to an even more wicked standing. Then Riot got butted in the chest. With an arrowhead in your chest, getting butted there hurts something awful.

Riot Holiday is in the third month of the six months he’s got left. Thing is, when you know you’re gonna die in a few days anyway, you tend to take chances you’d not take if your life stretched out in front of you for untold years. Riot’s a good name for this protagonist. And every time he gets hit in the chest, by accident or on purpose, you the reader wonder if the next hit will be the death of him.

July is month four. And July takes Riot and Tad into Mexico, looking for whoever sells rifles to Comanches, figuring Blood Shirt will come after more rifles.

After a bunch of trouble in Mexico and another wallop in the chest, Riot admits to feeling for Roslyn. Tad wants to know why he didn’t tell her. And Riot says, “You’re crazy, and you’re forgetting I haven’t much time left.”

Wicked. Wicked. And they spend nearly a month in a Mexican jail.

The fifth month is August. Riot is still on his feet.

Riot Holiday does things an ordinary man would hesitate to do. But after all, like he said himself, he only has a few more weeks or days to live anyway, so risks are easy to take. If he dies, it’s only a few hours or days earlier than what Doc Gates told him.

I won’t tell you what happens. Find a copy of Huffaker’s book for yourself. Guns of Rio Concho. It’s wicked enough to satisfy even Mean Pete. 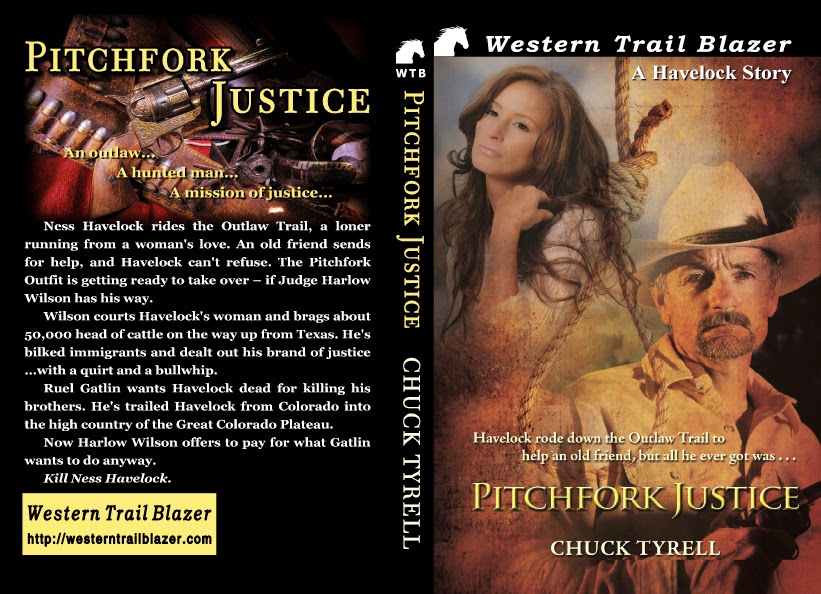 Pitchfork Justice is a Havelock Story.