I’ve been crashing to meet a publisher’s deadline (they can be sooo pushy) and was unable to put together a totally Western-oriented article. So, I’ve put together an entry using three shotgun-related articles from my e-book published by Osprey: The Big Book of Gun Trivia: Everything you want to know, don't want to know, and don't know you need to know.
Some of this covers modern shotguns, but much applies to shotguns of the Old West. Either way, if you have an interest in firearms, this may be worthwhile. The e-book may be purchased from any Amazon site, US or otherwise.
http://www.amazon.com/The-Big-Book-Gun-Trivia-ebook/dp/B00GQA26C8

How are the gauges of shotguns determined? The caliber or bore diameter of shotguns is determined by the diameter of a single ball equaling the diameter of the bore after forming a number of identically sized balls from one Imperial Libra pound (453.6 grams) of lead. For a 12-gauge shotgun the pound of lead has been formed into 12 equal sized balls (the result can vary depending on what value is used for the density of lead). Thus, the larger the gauge number the smaller the caliber of the bore—see below table. Common US shotgun gauges are 10-, 12-, 16-, and 20-gauge with the 12- and 20-gauges being the most popular. Unrealized by many, in the Old West the 10-gauge shotgun was very widely used (“Doc” Holliday of O.K. Corral gunfight fame carried a sawed off Belgium-made Meteor 10-gauge—“street howitzer.” By the way, the gunfight with the McLaurys and Clantons actually occurred on the opposite side of the block from the O.K. Corral.) 8-gauge shotguns saw some popularity too. The 4-, 8-, 14-, 24-, 28-, and 32-gauge were popular in the States and Europe to varying degrees in the past, but are virtually unheard of today, the “lost gauges.” 14- and 28-gauge shotguns were widely used in the Old West along with the more common US gauges mentioned earlier. Shotguns larger than 10-gauge have been outlawed for hunting in the US since 1918. 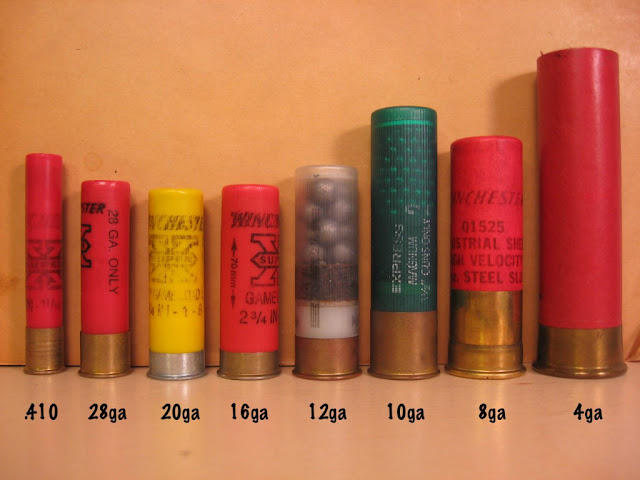 From 1922 there were 14½-gauge Greener Mk I and II police shotguns using a .577/450-inch* Martini-Henry single-shot, drop-block action, modified from old service rifles. The idea was that this odd British gauge prevented stolen guns from being used as the shells could not be privately purchased. It was circumvented by merely wrapping a smaller 16-gauge shotshell with a few layers of paper or tape. This was countered by developing a new shotshell in the late 1930s. This new round for the Greener Mk III police shotgun was an all brass case slightly bottlenecked down to 14½-gauge. Additionally it had a circular groove in the head encircling the primer. On the face of the breech plate on either side of the firing pin were two fixed studs that fit into the groove. This prevented paper-wrapped smaller shells from being loaded. Most of these shotguns, produced until 1964, were issued to prison guards and the Egyptian police, but also served in many British colonies. They were commonly known as “EGs”, Egyptian guns.
* The .577-450 Martini-Henry cartridge was actually .458-caliber being a necked down version of the older .577-inch Snider.
It is spelled “gauge” (abbreviated “ga.”) and never “gage” as is sometimes seen. “Gage” is often seen in US military publications, but that still does not make it correct. The British-developed gauge system is also used in Europe, e.g., 12 Gauge Schrotflinte in Germany, although the British usually call it “12 bore.” Older shotshells were sometimes headstamped, e.g., “No. 12,” but they were seldom called such. “Caliber” is also used to designate shotgun gauges in some countries. The Russians call it 12 калибра (kalibra). The French call it a calibre 12 fusil de chasse (hunting gun).
Of course Justin Wilson (1914-2001) had his own description of shotguns. “We rush back in the house and I get my twice-barrel car-a-bine, and Jean Ba’tiste get his automatic shootgun. Dat a one hole gun that shoot three times out of the same hole if the game warden there. If he ain’t there, it shoot five time right through the same place.”
The mathematical formula for determining gauge is:

Even larger “shotguns” existed for commercial waterfowl hunting—“market hunting”—in the 19th and early 20th centuries. These were known as “punt guns”—aka “stanchion guns,” “market guns,” or “merchant’s guns”—as they were mounted on stanchions (support posts) fitted aboard punts—on small flat-bottom boats with a square-cut bow. Punt guns were custom-built 1.75-inch to over 2-inch caliber (44mm to 50mm-plus) swivel guns loaded with shot or scrap metal to “blast entire flocks” of fowl rising from marshes and lakes. They had 8-foot (2.43-meter) or longer barrels. The overall length could be up to 13 feet (3.96 meters). As for blowing “entire flocks” out of the sky, the average number of birds downed per shot was 16. Large commercial operations through would employ dozens of boats on line for barrage fire. These were actually muzzle-loading, flintlock- or percussion-fired cannons rather than true shotguns. There were some later breech-loading models using shotgun-type shells in 2- and 4-gauge. Punt-gunning is still a suctioned, but highly regulated, sport in Britain. In the US, punt-gunning was outlawed in most states in the 1860s and by Federal law in 1918.

Then what is the “410” shotgun? There are a couple of exceptions to designating shotguns by gauge. The gauge system was not applied to the “four-ten” shotgun popular in the US and Britain. Its bore is .410-caliber. If designated in the gauge system it would be 67.5-gauge. One occasionally sees it described as “410-gauge,” but this is entirely incorrect. The Air Force even marked cans of .410 survival shotgun shells as “cartridges, shotshell, .410 gage,” to incorporate two errors, designating it by gauge and misspelling it as “gage.” It has been called 36-gauge (not even close, that would be 0.506-inch) and in Europe it is known as the 12mm (it is actually 10.4mm—“4-10” transposed by coincidence). Regardless, these are accepted designations and “36-gauge” and “12mm” are sometimes marked in parentheses on .410 cartons. It has been suggested that “36-gauge” was used simply to fall smoothly in line with the above run of standard shotgun gauges and this may well have been the case. The .410 appeared in Britain in the 1870s and did not become common in the US until about World War I. It is often claimed that the .410 was derived from the .44 Extra Long (.44 XL or EL) introduced by Ballard in 1876 for its single-shot rifles, but was replaced by the .44-40 Winchester. The assumption that the .410 was derived from the .44 XL was because there was a shotshell variant, but the .410 shotshell had long been in use in Britain and Europe.


There were also little 9mm (0.355-inch) rimfire shotguns available in the US in the 1920s and earlier in Europe. These smallest of shotguns were intended for small pests and known as “garden guns.” Today the 9mm shotshell has been “replaced” by the .22 Long Rifle birdshot, aka “ratshot” or “snakeshot.” These tiny shotshells are only good for rats, mice, and snakes within 10 feet (3 meters) or closer. Even then, don’t expect immediate disabling wounds, in fact, they may attack if wounded (just kidding). Except at pointblank range it will not ever penetrate layered bird feathers. It provides a 6-inch (150mm) shot pattern 6 feet (1.82 meters) from the muzzle. The shot size is officially called “dust” (0.04-inch—1.01mm) in diameter. They are also loaded with the next larger shot size, No. 12 (0.05-inch—1.03mm).

Do the different colors of shotgun shells have a meaning? Shotgun shells may be thick paper or plastic with brass heads or all brass or all plastic including the head (introduced in the 1960s). Empty shotgun cartridges are often called “hulls.” Paper and plastic shotgun shells are colored with red, green, and blue being the most common. In the US most ammunition companies produce red shells, but Remington uses green and Peters blue. UMC used to use green and maroon. There are exceptions among other manufacturers to include foreign shotgun shells. Other colors such as black, light blue, brown, and tan will be encountered. There is one notable exception. From 1960 Federal Cartridge Company began producing 20-gauge shells with yellow cases allowing them to be easily identified if mixed with 12-gauge shells; the two most popular American gauges.

Shotgun shells were and are packed in 25-round cartons since the "beginning of time immortal."

The reason for this is that a 20-gauge shell loaded into a 12-gauge shotgun will catch on the forward lip of the chamber, the chamber being slightly larger in diameter than the bore. When a break-open breech-loading shotgun is opened the chamber appears empty as the shell is 2-3/4 or 3 inches* down the chamber and a 12-gauge shell can inadvertently be loaded atop the 20-gauge. The carnage can well be imagined (Well, best not to imagine it.). Yellow 20-gauge shells though have not been 100 percent standardized throughout the industry, so take appropriate precautions. Federal 16-gauge shells are purple as they can similarly slip through the chamber of 10-gauge shotguns, even if there are fewer opportunities of this occurring as the 10-gauge is none too common now, although it has re-achieved a degree of popularity in recent years.
* The 12-gauge 2-3/4-inch (70mm) long shell is standard in the US. The 3-inch (76mm) is a magnum load and it should never be attempted to load them into a 2-3/4-inch chamber. Most modern 12-gauge shotguns have 3-inch chambers. There is also a little used 3-1/2-inch (90mm) long-range round, introduced in 1987, requiring special shotguns. The 12-gauge 2-1/2-inch (64mm) was standard in Europe and the Old West. The shorter rounds may be fired in longer chambered shotguns, but there may be feed problems in semi-automatic and pump shotguns.
I guess we need to talk about shot sizes sometime--bird shot, rabbit shot, buck shot, etc sometime, along with slugs.

Tears of the River
http://www.amazon.com/Tears-River-Gordon-L-Rottman-ebook/dp/B00KQMTHB0