Love in the Time of Miscegenation

She’s the sweetest rose of color this darky ever knew,
Her eyes are bright as diamonds, they sparkle like the dew;
You may talk about your Dearest May, and sing of Rosa Lee,
But the Yellow Rose of Texas beats the belles of Tennessee. 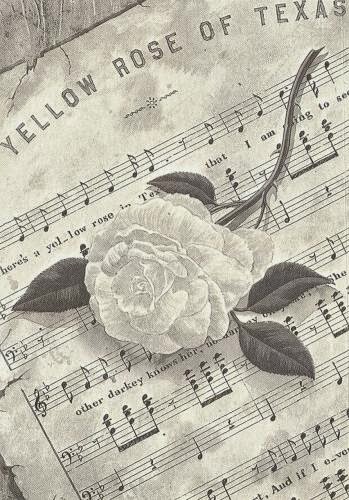 Those are the original lyrics to the chorus of “The Yellow Rose of Texas.” A folksong dating to early Colonial Texas, the first known transcribed version—handwritten on a piece of plain paper—appeared around the time of the Texian victory at San Jacinto in April 1836.

In its original form, the song tells the story of a black man (“darky”) who has been separated from his sweetheart and longs to reunite with her. The lyrics indicate the sweetheart was a free mulatto woman—a person of mixed black and white heritage. In those days, “person of color” was considered a polite way to refer to black people who were not slaves. “Yellow” was a common term for people of mixed race.

During the Civil War, “The Yellow Rose of Texas” became a popular marching tune for troops all over the Confederacy; consequently, the lyrics changed. White Confederates were not eager to refer to themselves as darkies, so “darky” became “soldier.” In addition, “rose of color” became “little flower.”

Aside from the obvious racist reasons for the modifications, legal doctrine played into the picture as well. Until the U.S. Supreme Court declared the practice unconstitutional in 1967, all eleven formerly Confederate states plus Delaware, Kentucky, Oklahoma, and West Virginia outlawed marriage and sexual relations between whites and blacks. In four of the former Confederate states—Georgia, South Carolina, Texas, and Virginia—marriage or sexual relations between whites and any non-white was labeled a felony. Such laws were called anti-miscegenation laws, or simply miscegenation laws. In order to draw what attorneys term a “bright line” between legal and illegal behavior, many states codified the “single-drop rule,” which held that a person with a single drop of Negro blood was black, regardless the color of his or her skin or their distance from a black ancestor.

From its passage in 1865 until its repeal in 1962, Arizona’s miscegenation law was the most comprehensive in the country. Because all ethnicities were prohibited from intermingling with any other ethnicity, people of mixed race were not allowed to marry or have sexual relations with anyone. (Yes, that last bit was specifically stated in the law.)

Texas’s miscegenation law, enacted in 1837, prescribed among the most severe penalties nationwide: A white person convicted of marrying, attempting to marry, or having sex with a person of any other ethnicity (including American Indians and Mexicans) was subject to a prison sentence of two to five years. Well into the twentieth century, it was not uncommon for the non-white half of the illicit relationship to be severely beaten or killed by irate local citizens.

The first American miscegenation laws arose in the Colony of Virginia and the Maryland Colony in 1691 and 1692, respectively. The last of the miscegenation laws flickered out in 2001, when Alabama finally removed the anti-miscegenation clause from its state constitution after a referendum passed with only sixty percent of the popular vote.

Footnote: For y’all Yankees out there... Only seven continental U.S. states never enacted miscegenation laws. All seven were among the twenty that composed the Union. Of the remaining thirteen, four—California, Indiana, Nevada, and Oregon—did not repeal their miscegenation laws until the period between 1948 and 1965.