What would the Old West be without the gun? From the Hawken of the Mountain man to the Peacemaker of the gunslinger, we just can’t imagine our protagonists any other way. A gun was not just a means of war between men, but a way to put food on the table and protect against wild animals. Of course, there was that ever-present incentive to politeness we’ve already discussed…

This is Part 1 of our gun glossary.

Army model: a revolver built to Army specifications, having a larger caliber and longer barrel than the Navy model

Bead: the foresight on a firearm (verb: to draw a bead)

Boot: the scabbard or covering of a saddle-gun (rifle, or more usually, carbine); this could be fastened under the girth and under the rider’s leg, usually to the right, or could hang by a loop from the saddle horn or by a strap at the rear of the saddle.

Border draw: the weapon sits on the hip opposite the gun hand, butt forward. This is not the fastest draw, but best when on horseback; also favored when wearing a coat. It was probably not much slower with early long-barreled guns (1850-70), but much worse with more modern revolvers and holsters.

Border shift: passing the gun from hand to hand during a fight

Cap-and-ball gun: a single shot pistol or revolver loaded with a ball and loose powder, fired by a percussion cap placed in the nipple of chamber in the case of the revolver. This was used in the West many years after the Civil War, and in rifles into the later years of the 19th Century. 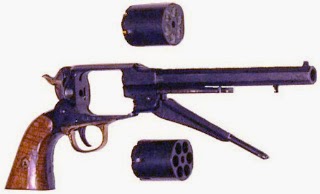 Colt: almost synonymous with “revolver,” a state brought about by the vigorous advertising of Samuel Colt. Other makes also popular were Remington, Smith and Wesson, and Starr. Colt had a hard time at the start: in spite of success with the old simply constructed Paterson Colt – a historically famous model whose merits were at once recognized by Texas Rangers, who used them with great success against the Comanche in 1844; it was also employed successfully in the Seminole and Mexican wars. However, Colt was forced into liquidation in 1843, though he had created a prototype upon which the US revolver was to be based for many  years to come. In 1847, with Eli Whitney as works manager and with the unwieldy Walker-Whitneyville as his ware, he once more entered the market. From that gun developed the various Dragoon models and these, through the Army, became Western guns. With all their clumsiness, they were good, useful guns for the period and could, in the hands of the right men, do effective damage up to and beyond fifty yards. With the famous Model 1860, Colt stayed with the basic design, ignoring the top-strap above the revolving chamber that strengthened the Remington model and produced a wonderful streamlined gun as good or better than any cap-and-ball in the world. For so big and long-barreled a weapon, it was remarkably well-balanced. But Colt had yet to produce his finest revolver – Model 1873, a cartridge handgun, perfect in balance and “feel” which, with slight variations and various names, such as Colt Frontier and Peacemaker, continued its production into the 1940’s, when it ceased to be made for some years. This was the gun that gave rise to the fast draws. Colt varied caliber to suit the needs of his customers: so-called “Baby Dragoons” (pocket-pistols) came in .31; the Walker-Whitneyville and its like which followed were .44; a number, such as Model 1851, were available in the popular caliber of .36. Around the time of the Peacemaker, the average big caliber had settled down to the .44-40 or .45, and the later years saw Colt turn to .38 as his lighter caliber.

Curly Bill spin: also called road agent’s spin; said to have originated with Curly Bill Brocius (or Graham). When pretending to hand the gun to a lawman, butt first, he reversed the weapon into his own hand by keeping his forefinger in the trigger-guard and twirling it around.

Derringer, Deringer: a small pocket pistol with a short barrel and large bore, to be used only at short range; concealed in vest pockets, sleeves, boot-tops, and even hats. This was usually a single shot, but could also be made with one barrel atop another (called over and under).

Dragoon: popular name for the early Colt which, over the years, came in various shapes and sizes, all conforming to the same basic pattern. The forerunner of this gun was the Walker-Whitneyville Model 1847, which was unwieldy and took some strength to carry and fire. The Dragoon Army Model 1848, a single-action .44, was somewhat handier. All models were designed for use by cavalry or dragoons. One model even had a detachable skeleton rifle stock.

Fan: keeping pressure on your trigger finger and knocking the hammer back with your free hand; not always accurate and not recommended for anything but short range. Some filed off the trigger so that the gun could only be fired by fanning.

Five-shooter: a revolver that holds five loads, either of cartridge or cap-and-ball