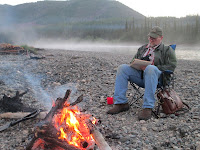 When I told my friend Bill that I wanted him to teach me to shoe horses, he rubbed his big red mustache and looked up at me.
“I’d don’t know, son,” he said. “A man as tall as you who can’t make a livin’ with his head higher than his butt is not a very smart man…”
Bill looked and acted like an incarnation of Yosemite Sam—redheaded, sawed-off, bow legged and fractious. I still think about him moving steadily around the horse, clucking and petting and sometimes even scolding as he worked. My height not withstanding, he let me apprentice with him for a little less than a year before pronouncing me fit to go shoe on my own.
My 75-pound horseshoeing anvil has a place of honor on our fireplace here in Alaska. I haven’t turned a shoe our drawn a clip on it for over fifteen years—though I’m looking forward to the day I can use it to tap out some rings for my grandkids out of horseshoe nails like I used to make for my kids. I do a lot or writing sitting here on the couch watching the fire, and looking at that anvil.
The first real fight I had after I’d started shoeing was nothing short of amazing. Compared to a squirming 900-pound horse, the wimpy little bad guy was a pushover. And, he couldn’t dish out a punch as hard as the horses I’d been dealing with could kick. I began to understand the ‘arms like iron bands’ line from the Village Smithy poem. It was like being paid to go to the gym.  For a while, I was shoeing two or three horses a week after work at the PD and as many as five on the weekends.
I’m not one to give animals human characteristics and rarely speak in absolutes, but I’d say there were a heck of a lot more problem people than problem horses. In fact, of the hundreds of horses that I trimmed and fitted for shoes, I only met a couple that were just plain un-trainable.
Over time, I learned that I got along much better with horses than with many of the people that owned them.
Shortly before I was hired by the Marshals Service, I was shoeing a big molly mule that was one of the most spoiled animals I’d ever seen. The lady that owned her cooed and clucked and fed her treats and generally treated her like a baby doll. The mule kept jerking her foot away while I trimmed her. I should have known I was in for an adventure, but her owner smooched at her and assured me she’d be fine. The molly calmed down while I put the shoe on the first front foot, I believe purposely lulling me into a state of idiotic bliss. Then, she waited until I had tapped the second nail through to jerk her hoof between my clenched thighs. The curvy little horseshoe nail punctured right through my leather apron, hooked around the inseam of my britches and into the meat of the inside of my leg. Reach down, right now and pinch the inside of your own leg. Do it hard. Now, multiply that pain times a gazillion.
Not much for cursing, I yelled something nonsensical and lashed out with my shoeing hammer, trying to stand up, but trapped under the chest of the now dancing molly mule. Instead of pulling free, she curled her front leg inward, drawing me with it and bouncing me off her belly like some sort of punching ball. Finally, leather apron, cotton jean and bloody meat ripped away and I fell to the ground.
The lady owner clucked and smooched, still trying to calm her mule while I sorted through my shoeing box and mulled over how many germs had to be living in that old barn and pondered the effects of lockjaw. Forgetting my manners, I dropped my drawers and poured a half bottle of 7 percent iodine on the wound—which brought a new round of pain that got me considerably closer to cursing.
It was then that I developed my new pricing schedule. I would charge 35 dollars to shoe and 500 dollars an hour to teach a horse or mule to be shod. I never had any takers.
I learned a lot from shoeing and from my friend, Bill—important things like rasping a level foot, not trimming away too much sole and not dobbing the toe.
I learned my bride does not much care for the smell of horse feet on my hands.
I learned that just because a shoe is black doesn’t mean it’s cool enough to touch.
I learned that if you put a drop of water on the face of your anvil then smack a hot shoe on top of it with a three-pound hammer it cracks like a gunshot and makes kids step away from the forge to a safer distance.
I learned that a piece of steel can be tempered in the right fire—or burn to a crinkle if left in too long.
Bill taught me that the rule of thumb was that five times the price of a haircut was a fair price for a shoeing job if you didn’t have to light the forge or draw a clip.
I discovered that singing calms many an otherwise rambunctious horse—probably because it calms the horse shoer.
I learned not to rush things and the importance of the tiniest detail from the very beginning of a job.
Bill loved the old proverb and recited at least once a week, usually with a bunch of nails clenched between his teeth:
For want of a nail the shoe was lost;
For want of a shoe the horse was lost;
For want of a horse the battle was lost;
For failure in battle the kingdom was lost—
All for the want of a horseshoe nail. 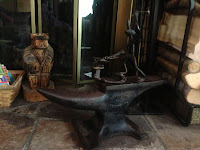 I moved the anvil the other day and noticed a piece of tape sticking out from the bottom. My youngest son’s name was written on it. He’s living with us for the summer, working an armored car route to earn money for college. He smiled when I asked him about the tape.
“That anvil is cool, Dad.” He said. “I want to have it after you die, so I put my name on it.”
Odd, I know, but that nearly brought me to tears. My son thinks my anvil is a cool as I do…
I drove my last nail through a shoe on someone else’s horse about ten years after I apprenticed with Bill. I was finally able to make a living with my head higher than my butt—Not sure if I ever became what Bill would call a smart man, but shoeing horses certainly taught me a lot.

Marc Cameron is a retired Chief Deputy US Marshal and 29-year law enforcement veteran. His short stories have appeared in BOYS’ LIFE Magazine and the Saturday Evening Post. He has published nine novels, six of them Westerns (several as a ghost writer and two under his pen name, Mark Henry).  His present Jericho Quinn series—NATIONAL SECURITY, ACT OF TERROR and STATE OF EMERGENCY features an adventure motorcyclist, Air Force OSI agent and renaissance man who spends his days sorting out his life and kicking terrorist butt.  Marc lives in Alaska with his beautiful bride and BMW motorcycle.
Visit him at:
www.marccameronbooks.com
http://www.facebook.com/MarcCameronAuthor