WOLF CREEK 6: HELL ON THE PRAIRIE 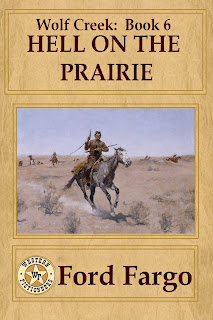 Our Wolf Creek series has slowly been finding its audience for the past several months -and in the last few weeks has started really taking off. And what great timing, because as of today we have a new volume ready for our readers: Hell on the Prairie.

Most visitors to our blog are familiar with the concept by now, but for those who are not -the Wolf Creek books are a series of collaborative novels, centered on the citizens of a fictional 1870s Kansas town. About twenty or so Western Fictioneers members are involved in the project, and each of them has created a unique character (sometimes two) whose point of view they write from. Each novel has half-a-dozen authors, working collectively as "Ford Fargo" -all writing one or two chapters of an overarching narrative. There have been collaborative novels in the past, and "shared universe" series in which multiple writers contribute a short story or entire novel using the same characters, but I can't think of any series that has ever done both at once.

In this, our sixth visit to Wolf Creek, we are doing something a little different. Rather than the collaborative novel we usually put out, this one actually is an anthology of stand-alone short stories. We plan to do this every once in awhile -another one, with a holiday theme, is due out for Christmas, and it will probably be a year or so after that before we do it again. Most of our Wolf Creek books will continue to be full-length novels, but the occasional anthology will give the creators an opportunity to delve more deeply into their regular characters, and take them in unexpected directions. And take it from me, there are a couple of real surprises in this one!

Here are the stories, in the order they appear.

"Hell on the Prairie" by Troy D. Smith.  Marshal Sam Gardner is very annoyed, to say the least, to find his town and his own job performance criticized in newspapers throughout the region. As he tries to figure out how to curb the town's growing reputation for wild violence, one of the most notorious gunfighters in the West shows up in Wolf Creek, looking for the marshal...

"Drag Rider" by Chuck Tyrell. In this story we learn about the past life of young cowboy Billy Below... how he became a cowboy, and why, and how he got his name.

"The Oath" by Clay More. Wolf Creek's doctor, Logan Munro, must deal with several troubling cases... and a deadly ghost from the past.

"It Takes a Man" by Cheryl Pierson. Derrick McCain returns to the Cherokee Nation, and his relatives there, to confront the recently-discovered secrets of his family.

"Asa Pepper's Place" by Jerry Guin. Deputy marshal Quint Croy has developed a friendship with ex-slave-turned-saloonkeeper Asa Pepper... but Quint's duty may place a strain on it.

"Muleskinners: Judge Not" by Jacquie Rogers. Elsie Parry and her father were only passing through Wolf Creek -but they did so right in the middle of the outlaw raid portrayed in Book 1: Bloody Trail. A raid that has a lot more to do with them than they knew...

"New Beginnings" by James J. Griffin. Former lawman turned livery owner Ben Tolliver gets the surprise of his life. Then he gets another one.

Check it out now!