Mission of Vengeance By Tom Rizzo

The sniper concealed himself in dense foliage on a bluff high above the Tennessee River, waiting for the Union patrol below to draw closer. 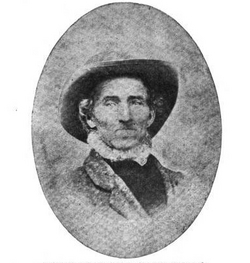 A warm breeze washed across his tanned, but aging face as he ran his hand along the smooth maple stock of the .50-caliber rifle, resting it on the limb of a tree.

Modified to his own requirements, the seventeen-pound weapon could end the life of a Bluecoat as far away as 500-yards.

This was the last place Jack Hinson wanted, or expected, to find himself.

A prosperous plantation owner near Dover, Tennessee, Hinson tried to remain neutral in a conflict his neighbors called the War of Northern Aggression.

Even though he owned slaves, Hinson opposed secession.
Early in the war, he had even befriended Union Gen. US Grant.

But then, everything changed.

In the autumn of 1862, two of Hinson's sons - George and John - went into the woods to hunt, and became the hunted.

When a patrol of the Fifth Iowa discovered the young men armed with rifles, they were arrested, and branded as Confederate guerrillas, known as bushwhackers.

Their denials went unheeded. They were lashed to a tree, executed by firing squad, and then beheaded.

The patrol made its way to the Hinson plantation where they summoned the family outside. Jack Hinson could only stare in shock and disbelief as Federal troops mounted the decapitated heads of his sons on the gate-posts to his home.

Following a tortuous period of mourning, Hinson realized there was only one way to deal with his grief.

He had already buried his sons, ages  17 and 22. He decided to free his slaves before the Emancipation Proclamation went into effect. Then, he moved members of his family to west Tennessee, where he thought they'd be safer.

The next priority involved the design and  manufacture of a specially crafted sniper rifle--one he could fire with deadly accuracy.

When it was ready, so was he.

Hinson held the upper hand because of his familiarity with the terrain, the river channels, the hills, and the valleys. Much of his wrath was focused on the Bluecoat cavalrymen of the Fifth Iowa Cavalry Regiment that executed his sons.

Hinson moved with the silence of a shadow, avoiding detection, springing ambushes at will, and disappearing among the tall ash and black oak trees to kill another day.

Any soldier within half-mile of Jack Hinson's gunsight - whether on land, in transports, or gunboats along the Tennessee and Cumberland rivers - was a potential casualty.

According to Tom McKenney, in his book, Jack Hinson’s One-Man War, A Civil War Sniper, Hinson likely killed more than a hundred Union soldiers, mariners, and officers mostly along the Tennessee River in Benton and Stewart counties. The actual rifle, however, bore thirty-six notchces.

Hinson also served as a guide for  Nathan Bedford Forrest for an attack on the Union supply center at Johnsonville, Tennessee.

In the meantime, the war had claimed yet another member of Hinson's family. His third son, Robert, was killed in combat on September 18, 1863, while leading a band of partisans in the Between-the-Rivers region.

Every effort to capture Old Man Hinson, as he was called, failed, despite the Union assigning infantry and cavalry troops from several regiments to track him down.

Hinson succeeded in evading all attempts to stop him, even a specially equipped amphibious force of marines.

According to the Clarksville Weekly Chronicle, Captain Jack Hinson died at his home on White Oak Creek on April 28, 1874. He was 67.

For the most part, he remained invisible in the history of sniper warfare.