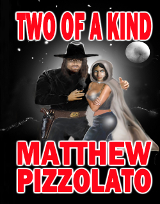 TWO OF A KIND is a collection of ten Western short stories featuring the outlaw Wesley Quaid, the
assassin Sabrina and Texas Ranger Jud Nelson.  It contains a variety of stories, including the very first Wesley Quaid story, "Pack of Wolves."  Most of the stories are new works and a couple were originally published in BEAT to a PULP and FIRES ON THE PLAINS e-zines. There are themes of bullying, racism and disability.

Part 1 of the collection contains some older stories and Part 2 advances the Wesley Quaid and Sabrina story line after the events in the novella, OUTLAW.

Ranger Jud Nelson appears in the stories, "Vengeance Trail", "Gone But Not Forgotten," and "One Riot, One Ranger." The mysterious assassin Sabrina reveals some of her background in "Kill the Envious Moon."  Of course, the outlaw Wesley Quaid has several adventures of his own.

Book Blurb:
Wesley Quaid returns to Texas with the assassin, Sabrina, riding at his side. Will the deadly pair embark on a new outlaw career of will Ranger Jud Nelson catch up with them?

Here is an excerpt from the Wesley Quaid story, "Six-guns and Pitchforks."


A passel of kids scattered, several of them darting in front of my horse. The animal pranced, but I got him under control with a firm hand.
The crack of a fist on flesh drew my attention to two struggling boys.
A strapping big man wearing overalls offered encouragement from under the awning in front of the mercantile. “Good punch, son. Hit him in the stomach!”
The victim of the fight appeared to be several years younger than the larger boy and was making no attempt to fight back... continue reading

Leave a comment along with your contact info to be entered into a drawing for a free copy of TWO OF A KIND for the Kindle.

Matthew Pizzolato's short stories have been published online and in print. He writes Western fiction featuring his antihero character, Wesley Quaid, that can be found in his story collection, The Wanted Man and the novella Outlaw.

Matthew is the editor and webmaster of The Western Online, a magazine dedicated to everything Western and can be contacted via his personal website or on Twitter @mattpizzolato.

Posted by Matthew Pizzolato at 2:00 AM