A NEWSPAPER IN PINK, THE NEWS WITH A WINK by Tom Rizzo

Long before the supermarket tabloids, the National Enquirer, Howard Stern, John Stewart or Stephen Colbert, there was … (wait for the drum-roll) … 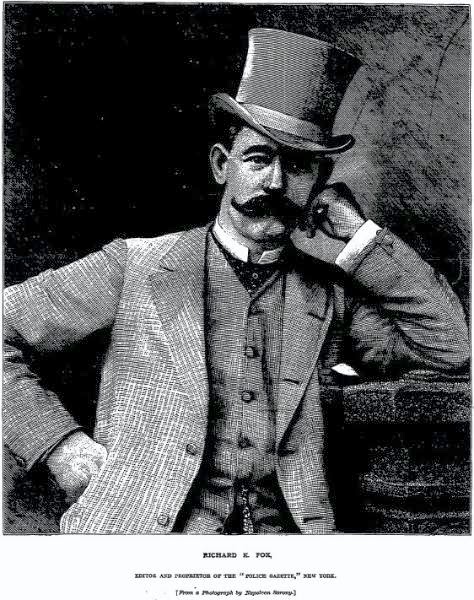 The journalistic outlaw behind the National Police Gazette was Richard Kyle Fox, an Irish immigrant who worked at newspapers in Belfast.

In 1874, Fox and his wife emigrated to New York City, where he went to work selling advertising for the Wall Street Journal.

A short time later, he joined the financially-struggling Gazette in the same capacity. He also served as  business manager to supplement his income.

Despite a steep decline in circulation, Fox saw possibilities where others did not.


In 1877, he managed to pull enough money together buy the enterprise.

And, he wasted no time implementing his vision to transform the Gazette into a media powerhouse, appealing mostly to young, single American men. Among the changes he made:

In an effort to accelerate circulation, Fox offered reduced subscription rates for business owners who catered to urban American males, such as barbershops, barrooms, hotels, and others. 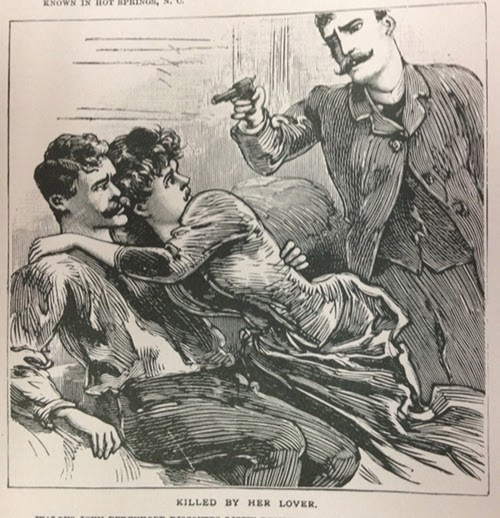 Although Fox re-designed the publication for maximum visual impact, he proved ahead of his time in terms of editorial style.


He demanded brevity in storytelling.

The word minimalist could probably be applied to his staff of writers.

Reporters/writers adhered to a strict set of writing guidelines:

The changes and modifications Fox implemented paid off in a big way.

After a short time, circulation tripled, to 150,000 a week. It spiked as high as 400,000 for special issues. But those numbers were, in themselves, deceiving.

The readership was much broader because of the pass-along rate. For example, an issue of the Police Gazette could be read by as many as a hundred or so men at a barbershop or a tavern. Ad revenues soared, as well, rivaling some of the largest and most popular magazines. 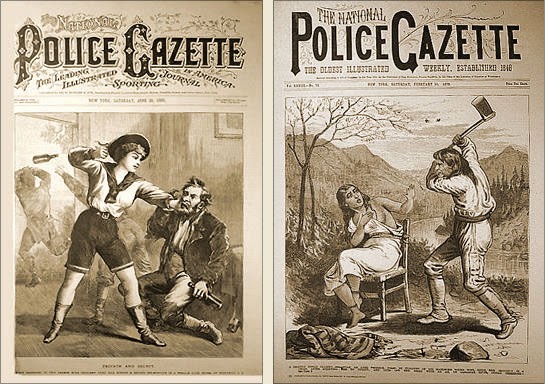 The publication's editorial menu included wildly-exaggerated helpings of scandal, crime and violence, sports, theater, the tawdry, and a variety of buxom babes.

Its appeal transcended American borders, enjoying popularity in twenty-six counties. Even outlaw Jesse James read the paper and, once, sent the publication a letter.


Despite his success, Richard Fox learned the road to success can be monitored by watchdogs and do-gooders.

Well, ya got trouble, my friend, right here
I say trouble right here in River City
-The Music Man 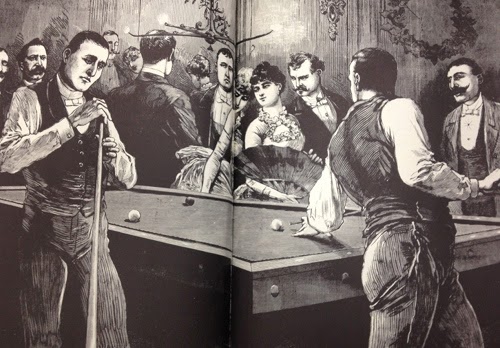 Trouble for the National Police Gazette came in the form of Anthony Comstock, New York City's famed moral crusader and postal inspector, who despised what he labeled as "vile illustrated weekly papers."

Comstock, who received his salary from the New York Society for the Suppression of Vice, had Fox arrested several times.

Fox, and other publishers, paid numerous fines and maintained an on-going legal battle with this self-appointed regulator of American morality.

Between 1872 and 1915, Comstock arrested ninety-seven individuals for "advertising for selling abortifacients or indecent rubber articles, including contraceptives."

But his efforts failed to stop Gazette.


Fox served as editor-in-chief of the Gazette for 45 years.

After he died in 1922, the publication began to decline in circulation. It outlasted several changes of ownership and financial hardships before ceasing publication in 1977. It is, however, still available online. 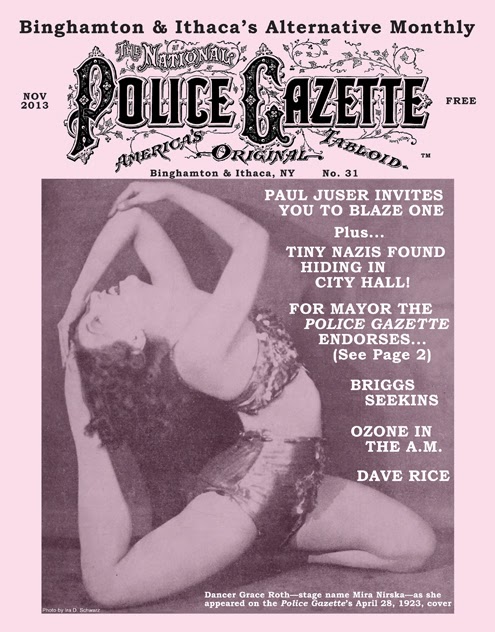 As much as anything, Fox's brainchild was a victim of its own success.

His influence triggered a dramatic change in American journalism. Because of the success he enjoyed focusing on sports, mainstream daily newspapers began producing sections dedicated to sports news and features about sports personalities.

Other publications mimicked his bare-bones approach to writing and reporting, and enjoyed the same kind of success--even today.