Writing about Indians When You're Not One: The Environment

You remember the commercial. Iron Eyes Cody was paddling a canoe along a polluted, sludged-up river. The narrator -I think it may have been William Conrad -says: "Some people have a deep, abiding respect for the beauty that was once this country. And some people don't."

At this point, a passing car throws the remnants of a happy meal at the Indian's feet, and we see a single tear rolling down his cheek. 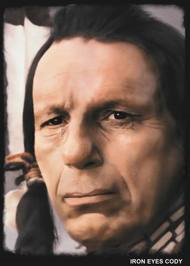 It is a familiar message. Native American Indians are often presented as, not only stewards of nature, but intrinsically a part of it. It is what Thoreau called "Indian wisdom" -being at home in nature, not a visitor to it.

On one hand, there is a lot of truth to that imagery. American Indians tended to be more in balance with their surroundings than were the European colonists who showed up one day in their world. Many Indian cultural groups believed in something scholars call "ordained killing," the idea that every element in the food chain is aware of their role and submissive to it, for the greater good of everything. Hence hunters would often have rituals to thank the spirits of the animals they killed, and some cultures practiced above-ground "burial" to make it easier for the animals to eat their flesh, thus ensuring that the great circle would continue.

Many of their practices fly in the face of the modern American images of them as people who did not transform their environment, but rather lived in tune with it. Indians around North America engaged in controlled burning, for example, transforming the forests and prairies. One effect of this practice was to remove underbrush that would otherwise provide kindling to lightning storms and lead to wildfires. Another was to aid in hunting; the sprouts that appeared in recently burned areas were especially enticing to many animals, making it easier to hunt them- the new growth brought your prey to you rather than you having to chase them down. The controlled burns were also conducive to transportation, for the great forests east of the Mississippi -cleared of underbrush -were much easier to travel through than they would be later. Early colonists marveled at the fact a man could gallop through a forest on horseback.

The Hohokam of the Southwest practiced extensive irrigation. Eastern Woodland Indians understood the concept of crop rotation, and of mixing several kinds of plants together in a field so that each could symbiotically aid the other -the tall corn provided stalks for bean vines to wrap around, and shade for gourds and pumpkins.

And of course, as western fans, we are all familiar with the bison culture of the Great Plains, in which Indians used "every part of the buffalo," never being wasteful.

But there is another side to the story.

Let's look at bison. Before the horse made hunting buffalo easier and more practical, Indians who lived and hunted on foot had to use other strategies. Many of you are probably familiar with the practice of frightening whole buffalo herds into stampeding over cliffs. Did the Indians use every piece of the buffalo, sometimes dozens or more, who crashed to their deaths? Of course not, there was far more meat there than the average band could use, or transport, so it was left to rot. This was due in part to the seemingly unending supply of bison on the plains, and partly due to the common belief that they were a gift to humans from the gods; so long as the right rituals were being practiced, they would always be provided for human beings. As Jay Leno might have put it, keep eating those Doritos. We'll make more. Therefore, there was no reason to conserve. Some historians, most notable Dan Flores, have suggested that over time the more efficient methods of hunting brought on by the horse, coupled with those cultural attitudes, might well have led to bison becoming endangered even without the help of white people.

Controlled burning was not always all that controlled, and sometimes resulted in disastrous forest fires. Large settlements like those of the Hohokam and Anasazi in the arid southwest, and at Cahokia in the Midwest, may have been abandoned due to the fact that their populations were unsustainable by the resources available, leading people to abandon them and reorganize into smaller bands.

Over time, many Indian groups abandoned their balance-oriented traditional hunting methods once they were introduced to the European trade system. Trade items previously viewed as luxuries came to be viewed as necessities -and the only way to get them was to give Europeans what they wanted. Which was furs (and sometimes captives to buy as slaves.) This led to an abandonment of the old ways and hunting practices that led to many species becoming endangered. Few people realize that white-tailed deer were hunted almost to extinction in the American South in the late eighteenth century, in large part by Indians who desired their skins as trade items to get European goods. I have often wondered if that is why deer in the South tend to be much smaller than those in the upper Midwest and Great Lakes region; because only the smallest and fleetest managed to survive that period of overhunting and reproduce.

I think the best explanation is this: American Indians, by and large, were a whole lot more responsible with their resources than the white colonists were. But they were not perfect, and do not really conform to our "Crying Indian" view of them; when push came to shove, they often behaved like -well, human beings. In fact, that last sentence could aptly sum up the overarching theme of this whole blog series. Indians were not (and are not) the "red devils" and savages they were often accused of being (side-point: the English word savage comes from the Latin word for forest.) Nor were they the romanticized, supra-human ideal "noble savages" that observers have wanted them to be since the earliest period of colonization. They were, and are, human beings. Which means that sometimes -many times -they did not do the right thing. That may be viewed as the deconstruction of a myth, but I believe it is, rather, the reconstruction of reality.
Posted by Troy D. Smith at 12:30 AM