Western Deal of the Day 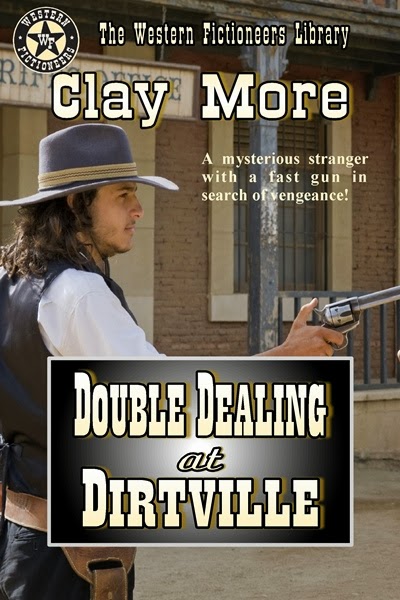 Dirtville is just a peaceful frontier settlement . . . until a sudden eruption of violence leaves two people dead and a mysterious stranger comes to town in search of vengeance, only to find that a web of corruption, greed, and murder hangs over the entire community! Once again, acclaimed author Clay More spins a fast-paced, engrossing Western tale featuring action, mystery, romance, and suspense. Nothing is quite what it seems in this thrilling new release from the Western Fictioneers Library except that it's pure Western entertainment!

Walt Burnett was madder than a coyote that had been done out of his dinner by a thieving buzzard. His weather-beaten face was redder than usual as he urged his big black up the saguaro and cardon cactus lined trail from the Rocking WB spread to the Pintos foothills.
When he finally crested the rise and looked down into the mine camp he scowled. Work had stopped and the two men were sitting by a fire sipping coffee from battered old tin cups and smoking. Water trickling down through the series of rocker cradles was the only evidence of mining activity. Even the mule tied up to the arrastra rock crushing machine was standing still, munching greedily on feed in its nose-bag, while the two men laughed and joked.
Burnett rode into the camp and immediately started berating the younger of the two men. He reached into his vest and held out a paper in a fist that trembled with rage. The younger man stood and watched contemptuously as the rancher let out a tirade of invective, as the third man hung his head when the rancher suddenly turned his ire on him. Then the younger man began to argue back. From a pocket he held out a bag, opened it and poured glittering dust into the palm of his hand.
Burnett eyed him for moments, then his anger peaked and he stepped forward and dashed the bag from his hand. Then his hand shot out, lashing the other hard across the face. And with a final curse he turned and made for his horse.
He had the reins in his left hand and his right on the pommel of the saddle, ready to put foot in stirrup when the knife thudded into his back, penetrating his heart and propelling him forward against the black’s side. He fell dying as the horse panicked and dashed forward.
The young man turned as the third man started to yell at him. Then the gun at his side cleared leather and two bullets hammered into the man’s chest, throwing him back to land on the fire.
As he pulled the knife from Walt Burnett’s dead body he grinned, unaware of the pair of eyes that had watched in horror from the top of the rise.

Clay More's Double Dealing at Dirtville is presently only 99 cents.