I've been a voracious reader since a very young age. My earliest memories are of my mother reading to me, and of my older cousin showing me the panels in his comics and explaining what was going on. I was anxious to do that for myself, and once I started learning it went fast. Looking back, I'm surprised at just how quickly my reading progressed -at the time I had no idea it was unusual, it seemed perfectly normal to me. I was reading the comics myself when I was 5 or 6, reading what we would now call mid-level "young adult books" when I was 7, and -in the summer of 1976, when I was 8 years old- read my first "grown-up" books. When I was ten I read the works of Shakespeare and Dashiell Hammett, and James Michener's Centennial.

But I'll never forget those first "grown-up" books. My aunt and uncle got them for my birthday, knowing I loved to read and probably not aware that what they were giving me was theoretically "beyond my reading level" (so I stretched my reading level.) It was a small stack of paperbacks... 20,000 Leagues Under the Sea by Jules Verne, The Prisoner of Zenda by Anthony Hope, King Solomon's Mines by H. Rider Haggard ....and a western called Bowie's Mine, by Elmer Kelton. 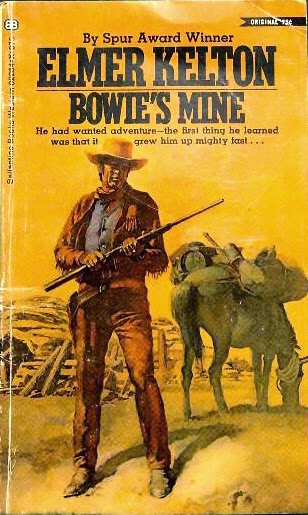 I enjoyed all four- but it was the Kelton novel that made an impression on me, as I already loved westerns in general. I still remember the opening scene as vividly as if I read it for the first time yesterday (although I did have to take my copy down off the shelf and remind myself of the characters' names.)

The novel is set in the Texas Republic, and opens with a young man named Daniel Provost plowing on his father's farm. There's a purty young gal who is willing to be his wife, and his father has promised him land of his own when the time is right- but he is not especially enjoying that whole "plowing" thing. And neither did I, from Kelton's description of it. And then a talkative, roguish stranger rides onto the farm, looking for a drink of water; it is an adventurer named Milo Seldom, and he is on his way to West Texas -Indian country -to seek fame and riches by finding the legendary lost silver mine of Jim Bowie. And he could use a hand...

You can guess what's coming. Young Daniel doesn't want fame and riches so much as he wants to have at least one real adventure before he spends the rest of his life plowing. And they're on their way.

There's no telling how many times I re-read that novel over the years (and talking about it gives me a hankering to read it again.) Nor is there any telling how many western novels I've read since then -many of them by Elmer Kelton.

But that one will always be special.

How about you, fellow western fans? What was the first western you specifically remember reading? Or which one has stuck with you the most through the years?