The term 'camp follower' is a broad term that encompassed many different types and classes of people. In general, it is defined as a civilian who follows an army.  Large groups of people followed the armies of both the American Revolution and the War Between the States and camp followers have existed since the beginning of organized warfare. 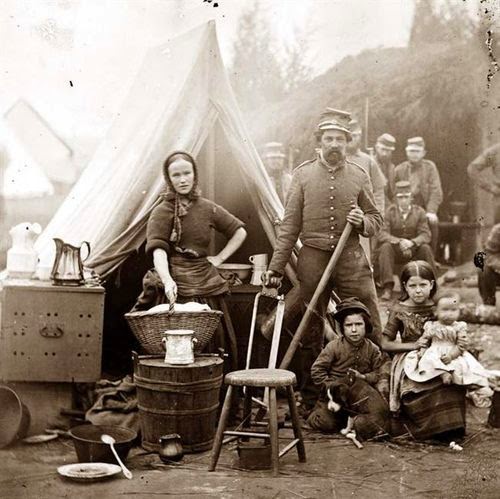 During the War Between the States, there were many different classes of camp followers. Some were the wives and children of the soldiers who followed their husbands and fathers because they had no way of supporting themselves with the men at war.

The sutlers, who provided goods to the soldiers that the Army didn't supply, were another class of camp follower. They sold items like eggs, cheese, butter and fresh or canned meat. They also sold dry goods such as playing cards, stationary, needles and thread, toothbrushes and straight razors.

Another group of camp followers were the nurses. Perhaps the most famous of these was the "Angel of the Battlefield" Clara Barton, who would later become the founder of the American Red Cross.  The care she provided the soldiers of the War was mostly self taught. In addition to medical care, Clara would also write down the words of some of the dying soldiers and pass them along to their families.

But there were many nurses more exceptional than Barton, some who even came under fire with their regiments. The Union army alone had more than 21,000 women on their payrolls as nurses, cooks, laundresses, seamstresses and chambermaids.

And of course, some of the camp followers were prostitutes. The term "hooker" is alleged to have originated because of Union Major General Joseph Hooker. He became notorious for throwing parties attended by fallen doves and there was even a red-light district in Washington DC that was referred to as Hooker's Division. However, that story that the term originated with him is largely a myth. "Hooker" was in use as a reference to prostitutes before the War, but the Major General surely contributed to spreading it's use.