I'M GIVING AWAY A DIGITAL COPY OF THE HALF-BREED'S WOMAN TODAY! JUST LEAVE A COMMENT WITH YOUR CONTACT INFO IN IT TO BE ENTERED IN THE DRAWING! 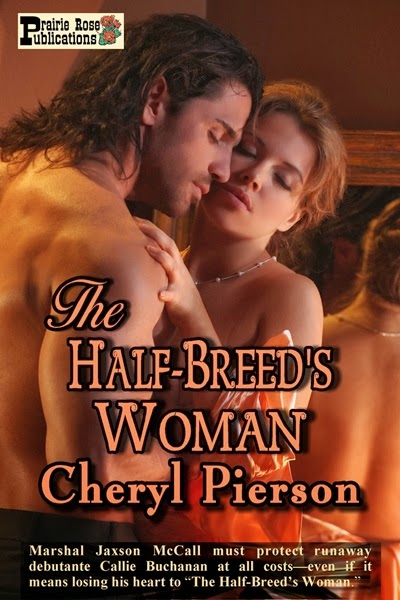 U.S. Deputy Marshal Jaxson McCall tracks runaway debutante Callie Buchanan from Washington, D.C., into the unforgiving badlands of Indian Territory.  But once the sparks fly between them, can he bring himself to take the beautiful young woman in to face an attempted murder charge?
Callie's greedy stepfather, a powerful government official, has his own plans for her—a  fate much worse than jail. Jaxson must protect her at all costs—even if it means his own death—or losing his heart to “The Half-Breed’s Woman”.
Excerpt:


Callie stretched out on her bed, her thoughts scattering in all directions. She’d stayed here in Fort Smith too long. By now, she knew they’d be searching the entire country for her. But, maybe by coming west, she would elude the whole bunch of them. She sighed as she turned onto her stomach.
The hotel was nice, with a clean room and a comfortable bed. The people in Arkansas seemed so friendly. Much more so than in Washington. They wouldn’t be so friendly if they knew what she’d done.
Who would have thought she’d become a murderess before her eighteenth birthday? She had killed a man, but her stepfather had left her no choice. Not after the things he’d said to her.
Tears filled her eyes, and she flopped restlessly onto her back, staring up at the ceiling. A life for a life. Deep in her heart she knew Dunstan Treadwell had killed her mother. She just couldn’t prove it. And who would’ve believed her anyway?
Her stepfather was a very well-respected and influential man in Washington. He’d been in a hurry to marry her mother for her money, but Callie knew Treadwell already had run through most of it.
Did anyone else know? He’d kept it well-hidden. But, she was certain his gambling cronies knew what kind of financial distress he was in. That was why he was determined to—
She jerked her thoughts away quickly. Unbearable thoughts.
BIO:
Cheryl was born in Duncan, OK, and grew up in Seminole, OK. She graduated from the University of Oklahoma, and holds a B.A. in English. Cheryl lives with her husband in Oklahoma City, OK, where she has been for the past 29 years. She has two grown children, and a Great Pyrenees "granddog", Embry.
LINKS:
Trade Paperback — Amazon Kindle — B&N Nook — Smashwords