When a man puts in over sixty hours of backbreaking labor in the mines, or punches cattle from dawn to dark every day, by the end of the week he's ready for a little entertainment. In the American West, that entertainment was provided primarily by saloons and dance halls. With the man to woman ratio of 20:1 or even worse, sometimes much worse, seeing a pretty lady was the delight of a man's week. And he spent a lot of money for the privilege. Enter: the hurdy gurdy girls. 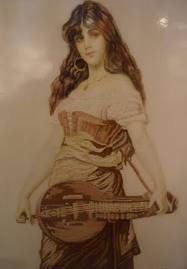 Hurdy gurdy girls were distributed all over Europe, Australia, and North America, but this article addresses only the girls who came to the American West, including Canada, USA, and territories. What's a hurdy gurdy? (Find out at Chris Eaton's website) Why were they called hurdy gurdy girls, and how did this all come about? The best site to answer this is The Universe of Bagpipes.

To supplement their incomes, in the 1820s farmers and farmworkers began to make wooden brooms and fly-whisks during the winter which they, as itinerant peddlers, sold in the summers in the surrounding areas... It was soon discovered that the wares sold better when accompanied by dancing, hurdy-gurdy playing girls. Quickly the dancing and music became ever more important and the pretty girls became ever better known...there was a lot of easy money to be made.

Hurdy gurdy girls could be found all over the West. Generally, prostitution was not involved. The girls, from poverty-stricken families in the duchies of Germany, were of strong moral fiber. They danced with men, and cajoled them to spend money on drinks, but services beyond that were taken care of by other women.
In 1913 Idaho Governor William McConnell wrote in his book Early History of Idaho:

The girls were engaged by the proprietors of the 'social resorts,' in sets of four, with a chaperone who accompanied them at all times. They were almost invariably German girls, and although they were brought into contact with rough people and sometimes witnessed even the shedding of human blood, the rude, generous chivalry of the mountain men, some of whom were always found in these resorts, was a guarantee of protection from violence, and strange as it may sound to those of modern times, these girls were pure women, who simply did the work they had bargained to do, and when their contracts expired, most of them married men whose acquaintance they had made while pursuing their vocation, the men who knew them best, and with the money they had earned by dancing with 'Wild Bill,' 'Texas Pete,' and others, helped to buy a house for themselves and husbands. The poor girls, and they danced only because they were poor, had kind hearts and wonderful patience and forbearance.


Some hurdy gurdy girls came over in family groups. Arthur Hart, Director Emeritus for the Idaho Historical Society, cited some census data in his article for the Idaho Statesman, Idaho History: Hurdy-Gurdy girls on frontier danced with all comers. Notice that this troop is called a "Hurdie Gurdie Troop" but it appears they only play violins.

The 1870 census is enlightening. In Granite Creek, Boise Basin, with its post office in Placerville, a "Hurdie Gurdie Troop" is listed as made up of Conrad Schneider, 43, his wife, Catherine, 35, and children ages 15, 11 and 2. Conrad was a violinist, as was his brother, George, 37, whose wife, Mary, was 34. A third violinist in the troop was Conrad Deihl, 19. Four dancing girls ranged in age from 15 to 27. All were from the Rhineland area of Germany.

There were two kinds of women in the Old West: good (meaning strong moral fiber) and bad (meaning sexually promiscuous). Hurdy gurdy girls were considered "good women" by men, but usually not by "respectable" ladies, the schoolmarms, and bankers' wives of the town. Because the dance hall owners had to make sure the girls were safe, hall patrons were expected to follow rules such as these posted at the Alhambra, a dance hall in Silverton, Colorado:

Rule 1. No lady will leave the house during evening working hours without permission.
Rule 2. No lady will accompany a gentleman to his lodgings.
Rule 3. No kicking at the orchestra, especially from the stage.
Rule 4. Every lady will be required to dance on the floor after the show.
Rule 5. No fighting or quarrelling will be allowed

The ladies to the left are hurdy gurdy girls in Barksville (I think), British Columbia, Canada. They danced as many as fifty dances a night, at a doller per dance.


Later in the 19th Century, hurdy gurdy girls didn't just dance, but then they weren't from the Rhineland, either. The name became synonymous with soiled dove, and the girls' origins were not limited to a small area of Germany. However the original hurdy gurdy girls in the American West often found husbands and made good homes for themselves and their new families.