Review Roundup: Riding with the Rangers 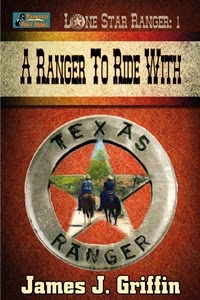 When fourteen-year-old Nate Stewart’s father uproots his family and moves them all from Delaware to a small farm and ranch in Texas, Nate doesn’t rebel. Instead, he mourns the loss of friends and the city life he understood. He was just discovering girls. He knew where he belonged in the pecking order, and everyone was safe in their homes.

Nothing is the same in Texas. The family lives in a dog-trot cabin far from the closest small town. They struggle to raise their own food, they have only one another for company, and the threat of outlaw and Indian raids looms on the outskirts of their existence. Even worse, Nate has no skills for living off the land and even less innate ability. Though his friends expressed excitement about the cowboy life—and his older brother lives it—Nate feels inept and useless.

All that changes when a surprise attack by some very bad men leaves Nate the sole survivor. When he balks at returning to Delaware to live with an aunt, uncle, and eight cousins he’s never admired, a company of Texas Rangers bends the rules and recruits him, promising more than a chance to avenge the death of everyone Nate held dear. The Rangers offer him a chance to become an honorable man.

Lone Star Ranger 1: A Ranger to Ride With, James J. Griffin’s first young-adult novel, offers few surprises to those familiar with the author’s work. The Rangers are tough as rawhide, the outlaws are as evil as they come, and the hero is a good-hearted man-to-be forced into a role he never intended to play. The tale is a throwback to the westerns of yore, when good and evil were easy to identify, tough frontier hombres had soft hearts, and villains always got their just desserts. Griffin is a master of the form.

Nate’s adventure is full of the gunfights, primitive living, and aw-shucks-ma’am joshing typical of Griffin’s stories. (Also typical is the way shirts disappear with reckless abandon.) As expected of this author’s work, the good guys possess unerring moral compasses and horses play a central role. Griffin, through the Ranger characters, spends quite a bit of time teaching Nate and readers how to care for and ride a cowboy’s best friend. The author also is crafty about imparting Texas Ranger history and lore, a subject about which he is an expert. Under the Rangers’ patient, protective tutelage, Nate grows into the cowboy he never thought he could be—and an estimable human being, to boot.


Kathleen Rice Adams is a Texan, a voracious reader, a professional journalist, and an author. She received a review copy of Lone Star Ranger 1: A Ranger to Ride With from the publisher. Her opinions are her own and are neither endorsed nor necessarily supported by Western Fictioneers or individual members of the organization. Links in the review are for convenience only; they do not produce affiliate revenue.