Writing into the Sunshine 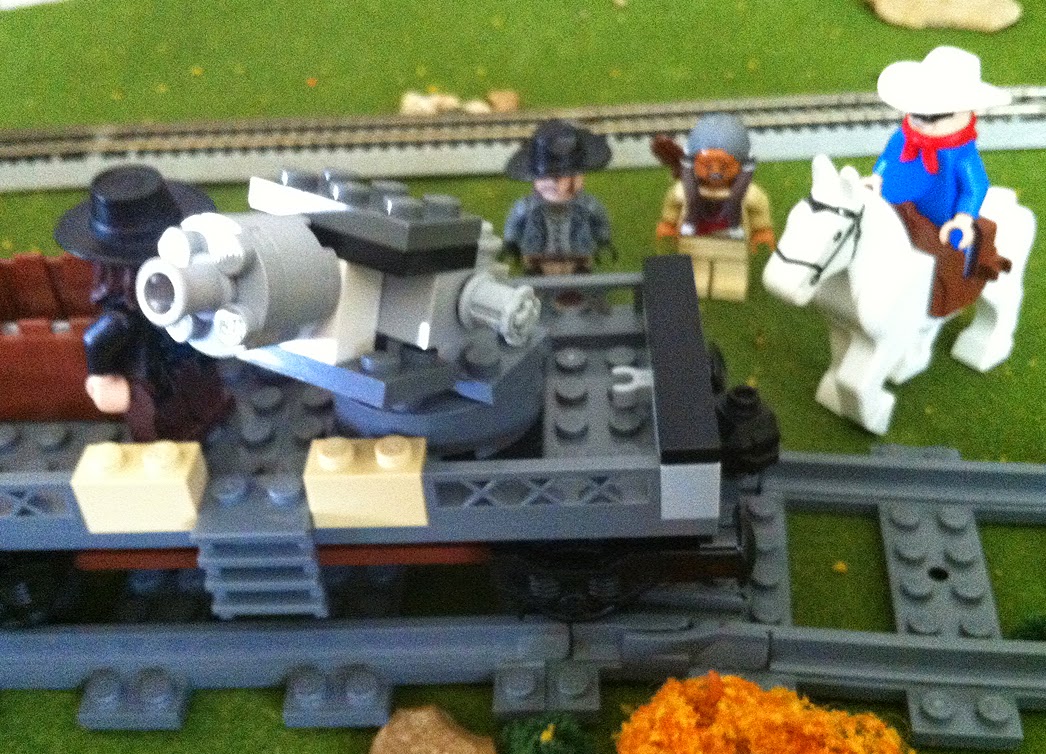 The first stories I made up were not written down.

I’m betting you were the same way. What is now a professional endeavor to spin wild west yarns started with a thread of imagination woven through summer tapestries. Maybe, like me, you were Lucas McCain or Annie Oakley or Roy or Dale, making it up as you went along, writing in your head, not so much into the dark, as into the sunshine.

I was also lucky enough to own a few MARX Wild West toys, and I had a pal  with the figures and accessories I didn’t have.  Saturdays and weekday afternoons, we’d combine our sets for B-matinee style adventure.

Forty years later, Johnny West and Geronimo are comparatively still, content to perch on my bookshelf and watch over my son Wyatt, as he constructs his own series of tales.  I’m not as complacent. When, more than a year ago, he showed me the series of Lone Ranger tie-in playsets available from LEGO, I wanted one of everything. So did he. We did the math and realized, with other responsibilities already budgeted in, it would take close to a year to get it all. Maybe less if we put some stuff on the Christmas and birthday list. So before the movie came out (and this post is not about the Lone Ranger movie, but about the toys), we made our plans.

A few weeks ago, with the Comanche Camp, we finished our collection.  LEGO blocks being what they are, and with the planned obsolescence of sub-atomic sized accessories, we probably don’t have a 100% complete set even now. But collecting it all for the sake of a collection, for simply putting it on display wasn’t the point. The point was to use it to create our own adventures, or reinvent scenes from Lone Ranger books, comics, TV shows, or yes, even the 2013 movie.  (And in that sense, I guess this post is about the movie. Whatever was wrong with the Disney production, we quickly came home and fixed it through our own restaged efforts.)

I won’t run through the list of Lone Ranger LEGO playsets here. That’s for Amazon or Lego.com if you’re interested.

Just wanted to share with you two things this day, one week before Father’s Day. The first is that young people can and will enjoy all the tropes of the old west, and they’ll be eager to make up their own. Yep, even without dirty jokes or references to current pop culture. I know because I’ve seen it with my son and his friends. They simply need someone to show them the way.

Second, my guess is that LEGO overestimated the success of The Lone Ranger and produced more than it sold. Like the Dick Tracy licensing glut of 1990, the movie was less than its hype. That said, there’s no danger of this stuff being hard to find.  So if you see the Stagecoach Escape playset, pick it up. If you see the Silver Mine Shootout, tap into it. Share them with somebody who’s young enough to reinvent the old west in new ways. Once more, you’ll be writing into the sunshine.
Posted by Richard Prosch at 1:00 AM