Dispatches from the Yukon by Marc Cameron 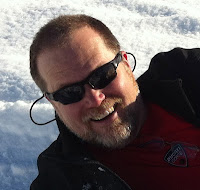 I figure I’m finally too old to die tragically young. It’s one of the reasons I allow myself to ride motorcycles.
I’m pretty danged blessed to have lived the life I have. Law enforcement, horse shoeing, travel, a good scrap or two—it’s given me all sorts of opportunity for research. And frankly, I find I enjoy the research nearly as much as the writing. Now that I’m retired and the kids are all out of the house, I have even ramped it up a bit, doing some things I might not have done when they were younger and my job depended on me staying off the injured list.

I’m writing this in the back of a multi-purpose room on the shores of  village on the Bering Sea coast. Frankly, the fact that I owed a blog today slipped my mind until late last night. So, I thought I’d give you a quick description of life in Western Alaska.

Been sleeping on the floor in various schools along the Yukon River for the last three weeks, working with Yupik Eskimo youth in a series of Public Safety Academies with my friends with the Alaska State Troopers and US Marshals. It’s interesting work. Allows me to keep a finger in the law enforcement pie, keep up my contacts in the business and, basically, do what writers do—research the human condition. 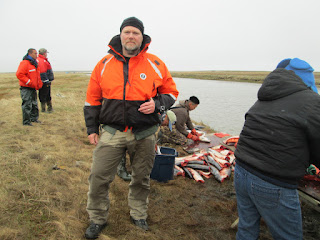 I went out on the Bering Sea in a skiff yesterday, watching some Yupik friends on a seal hunt in between checking set nets for salmon.  Got to experience some good four-foot waves and Bering Sea spray in an open skiff.  Went up river a bit and talked to some families who were cutting fish for their winter food. Ate some dried seal meat—and found it pretty tasty but also good at cleaning out the system. Thankfully, unlike last week, this school has working toilets.

Rode through the village on an ATV, waving at kids until my arm was sore. Watched a little girl wearing nothing but denim diaper pants splash in a muddy puddle in front of her weathered plywood house—while I was dressed in Smartwool long underwear and a heavy float coat. “Tundra tough” they call it.

Since English is the second language in many of their homes, there is a particular way of talking out here, that I would never have known had I not heard it firsthand. 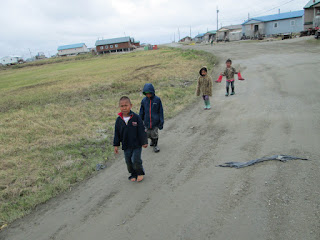 “Whach you’re doing?” they say, looking wide-eyed over snotty-nosed smiles. They’re used to marshals or troopers giving them trinkets when we come to the village so it doesn’t take long to build up a following while they check out what you have. “Tattoo, tattoo, pencil, gum?” They are quick to laugh, and have a great sense of humor—taking and dishing out good-natured ribbing but always ending with “I joke.”

In one village, I attend the ‘Forty Day’ for a five-year-old girl, shot in the head by her eight year old brother.

In another, salmon, herring and herring roe drapes across driftwood frames, drying in the wind. A lady my age finds out what we’re doing and stops to talk to me about parenting. “My kids try to turn me against their teachers,” she says, “But I bite their toes off.”  Nice turn of phrase. I often “bit my kids’ toes off” when they were growing up.
This an awesome place—and by that, I don’t necessarily mean all good. There’s beautiful scenery, a rich culture, and all the salmon a guy can handle. 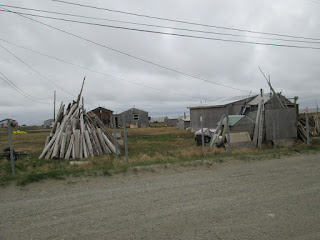 Domestic violence is rampant out here, as is sexual assault and sexually transmitted disease. One friend of mine has been a public safety officer for seventeen years and answered over thirty suicides—in a village of 1400 people. I am told that a young girl out here is six times more likely to be raped than the average female in the US. It is rare that I spend three days in a row in a village without some sort of violent crime occurring.
In a village on the lower Yukon, I watched a weathered and all too world-wise fifteen-year-old girl go from a five-cups-of-coffee-a-day hard case who dipped punk ash (a burned tree fungus that, when mixed with tobacco will give the unaccustomed a mind-blowing buzz) into a beautiful, giggling kid when she had a safe place to sleep and eat.  Gotta admit, I got a little teary-eyed at graduation when she started to put back on her shell to return to her own village.
Tragically young for such a life—as so many of them are out here.  I already know how her character fits into my next story.