Something old, something new . . . nothing borrowed by Chuck Tyrell 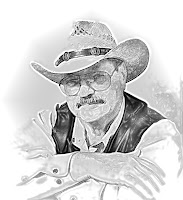 The time has come around again. Western Fictioneers gets so many really good blogs that it's hard to write another that might offer something others don't yet know about.

Next to impossible, I suppose.

So let me do a little shameless self promotion.

Some years ago, I wrote a western for the Black Horse Western line called Guns of Ponderosa. It featured a tough bounty hunter and town tamer named Matt Stryker.

Some years after that, Matt Stryker came to prominence again. This time in Road to Rimrock. This time, which is prior to his stint as marshal of Ponderosa, Matt is the marshal of a dying town called Rimrock, up above the Mogollon Rim in the high Arizona country. He goes to great lengths to keep a promise made to the town drunk . . . as only an honorable man would do.

Now Guns of Ponderosa is available again, re-titled Stryker's Law. Some of you may know, but Black Horse Westerns have a limited press run and are soon out of hardback print. Then, like Guns of Ponderosa, many are picked up by large print paperback houses such as the Linford Western Library. Nevertheless, most go out of print within five years of their initial publication. At this point, the rights revert to the author.

Stryker's Law is the first of the new line of STRYKER books from Piccadilly Publishing.

About a year ago, prolific British westerns author David Whitehead, who wrote under the name of Ben Bridges got together with his friend, also a westerns writer, Mike Stotter, to create Piccadilly Publishing. Perhaps I should let him tell about it. Take it away, David: 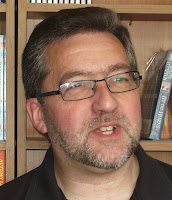 By the time we celebrated our first anniversary in May 2013, Piccadilly Publishing had issued no less than sixty books—not bad going for a company that only began life at all thanks to a chance remark by my friend and partner in this venture, Mike Stotter. 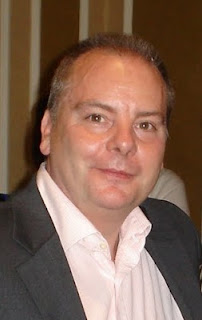 Mike Stotter
“I know what I wanted to ask you,” he said right out of the blue one day. “What do you think about bringing all the old Piccadilly Cowboy westerns back as e-books?”
Hmmm. I had to think about it for all of two, maybe three seconds. The possibility that we could somehow bring all those hard-and-getting-harder-to-find books back into ‘e-print’ was impossible to resist. It had all been so much fun first time around, when Mike and I, then in our late teens, had taken it upon ourselves to write to, then meet up with our idols. The possibility of being able to recreate that period all over again was immensely attractive.
The name of our company was never in doubt. Terry Harknett, Laurence James, Angus Wells, John Harvey, and latterly Ken Bulmer, Mike Linaker and Frederick Nolan, all became known as ‘Piccadilly Cowboys’ because that was the farthest west they’d ever been. So ‘Piccadilly Publishing’ it was.
Now, we needed to get our writers on board.
Terry Harknett’s EDGE and STEELE books were already being reissued quite successfully by Malcolm Elliott-Davey, alias ‘Cody Wells’ – who himself was to become an important part of our team as things progressed. But Mike was still in touch with John Harvey and Elizabeth James, widow of Laurence. And Mike Linaker was only too happy to let us give his BODIE THE STALKER and JASON BRAND books a new lease of life. Indeed, as we went on, we also added his CADE action-adventures and a third western series, THE TYLERS.
Inevitably we soon found ourselves widening the scope of our company. I had always enjoyed the above-average MADIGAN westerns by my friend Keith Hetherington, alias ‘Hank J. Kirby’, and so he was another writer we went after very early on. Before long we added the likes of Frederick Nolan, alias ‘Frederick H. Christian’, and even took it upon ourselves to add some SF, and latterly, crime, to our monthly schedules.
But our first love was and remains the western, and that is how we see ourselves – first and foremost as a publisher of westerns – specifically, series westerns.
In those early weeks and months, however, there was plenty of frustration and disappointment. In all too many cases it has proved to be almost impossible to track down some writers and establish who now owns the rights in their books. And I suppose, as new kids on the block, many other writers or their representatives preferred to wait and see if we really were serious about what we planned to do. But that was fine. We expected to have to prove ourselves.
In May 2012 we did just that. That was the month we published our first book, TRACKDOWN, by Neil Hunter.
Now, it’s at this point that you expect me to add, “ ... and the rest is history.” It isn’t, though. More accurately it’s still history in the making.
Over the months we’ve added a number of books and authors to our line-up, the idea being to vary our monthly schedules as much as we can, and provide something for everyone. So now we also have the tough-as-tacks IRON EYES and more traditional BAR 10 books of Michael D. George, writing as ‘Rory Black’ and ‘Boyd Cassidy’ respectively. We have THE REAPER and SHATTERHAND books of B. J. Holmes. We have BELLE SLAUGHTER by Tony Masero, the FARGO, SUNDANCE, JOHN CUTLER and RANCHO BRAVO novels of Ben Haas, writing as ‘John Benteen’ and ‘Thorne Douglas’. We have THE STORM FAMILY by Matt Chisholm, LOU PROPHET by Peter Brandvold, THE SANTA FE TRAIL by Kent Conwell ... and more to come.
The level of success our company has had has been both surprising and gratifying. Western readers have embraced ‘the brand’ and many of them now rightly feel that they are just as much a part of Piccadilly Publishing as the writers themselves. I can’t explain why this is, but my guess is that our readers know that we are every bit as much fans as they are, so maybe they identify with us and understand that we are genuine in our desire to bring the western back to its old prominence, and of course to keep it attractive and affordable in the process! 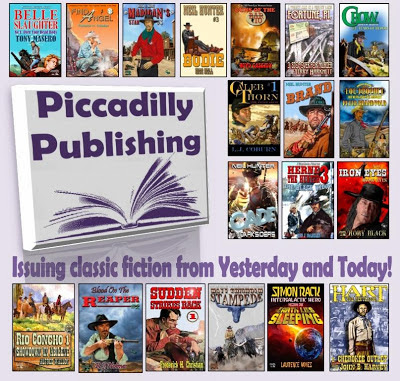 Need I say more?
Posted by ChuckTyrell at 4:17 AM