The lead is flying in Wolf Creek Kansas once again!

Volume 5 is brought to you by (alphabetically): 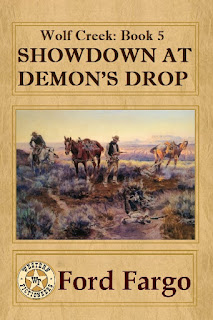 This one is a sequel of sorts to Wolf Creek 1: Bloody Trail.  Here's the blurb:


The brutal Danby gang paid dearly for their raid on Wolf Creek. But some of them escaped, and their new leader Clark Davis is hungry for revenge -on the town, and on the man that he believes betrayed the gang, Derrick McCain. Seminole scout Charley Blackfeather, meanwhile, wants his own revenge on Davis for his actions in the war...at the Centralia Massacre.
Blood is going to flow..

WC 5 is available for kindle at AMAZON, and for virtually all other digital platforms at SMASHWORDS.COM  [NOTE: if the Amazon link is not live yet -they're slower than usual this time around for some reason -smashwords sells ebooks for both the Kindle and the Nook] ...it'll be at B&N soon, and will be in paperback in a couple of weeks or so (we'll keep you posted.)


C'mon... you've GOTTA find out what happens next!

Better read it now, Book 6 will be out in one short month... 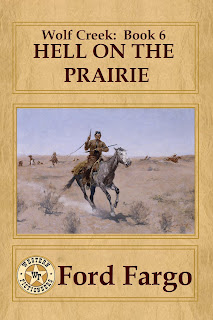