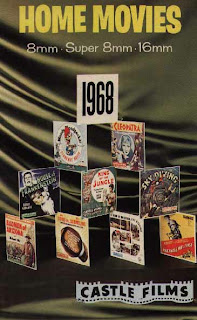 The ad in the back pages of SCREEN THRILLS ILLUSTRATED was like a siren’s song: impossible to resist, but what it promised was an eternity away. If you were lucky, the eternity was closer to six weeks, depending on your mailman. The promised treasure was Castle Films’ 8mm silent digest of THE SPOILERS, starring John Wayne and Randolph Scott, that the Captain Company would deliver to your door for a mere $5.99.

What kid wouldn’t want that?

I surely did, and with pennies scraped together, I gave my Mom the cash, and she wrote the check, even throwing in a little extra for postage. It didn’t help. The wait was an eternity, but THE SPOILERS finally arrived one Saturday, and I spent the entire weekend watching Duke and Randy slug it out in one of the great fights of the movies, complete with sub-titles.

And who needed dialog, anyway? I had the rattle of my family’s old GAF projector underscoring every scene.

My first Castle Films reached my hands courtesy of FAMOUS MONSTERS OF FILMLAND and SCREEN THRILLS, but those flat boxes, with the gorgeous color paintings of The Wolfman or Joel McCrea, were available in dozens of places where we could press our noses against the glass, and dream home theater dreams.

During the 1950’s and 60’s, there was a 8mm home movie explosion. Dads in Bermuda shorts had become directors, shooting picnics and graduations, while living rooms were being turned into theaters on Saturday nights, with the shaky family flicks interspersed by newsreels and cartoons picked up at the local camera store.

A newsreel cameraman named Eugene Castle quietly started this home entertainment revolution in the 1930’s, by making newsreels, boxing films, and Oswald the Rabbit cartoons available for purchase by the general public. The first releases were in 16mm, but when he added the 8mm format at the end of the thirties, sales jumped.

Castle Films were doing well, getting the rights to short subjects and even a few features, mostly early sound westerns that they sold in “digest” versions, running nine minutes each. It was when Universal’s non-theatrical arm, United Film Distributors, stepped in with a solid money offer to Castle, that his company became the leading outfit for movies-at-home.

One of the first releases under United was Abbott and Costello doing their legendary “Who’s on First” from THE NAUGHTY NINETIES, the only feature film in which they performed their famous routine in its entirety. Released in 16mm, the film was a hit, expanding the market of at-home movie hobbyists, and prompting Castle to tear into the Universal library full-bore. The next big release in both 16 and 8mm: ABBOTT AND COSTELLO MEET FRANKENSTEIN, and it out-sold everything.

Above all else, Universal meant monsters, and the 200-foot digests of their horror classics, along with three-minute “headline editions,” became the company’s life-blood. Castle brought out a digest of DRACULA, featuring a great painting of Bela Lugosi on its lid, and was quickly followed by BRIDE OF FRANKENSTEIN, SON OF FRANKENSTEIN, and THE MUMMY.

But where were the westerns amid Karloff, Lugosi and Chaney? Actually, Lon was represented in a cut-down of a chapter of his Universal serial OVERLAND MAIL, called INDIAN RAIDERS, while Abbott and Costello chimed in again with the digest NO INDIANS, PLEASE! culled from RIDE ’EM COWBOY.

A 16mm collector himself, Lou Costello knew the money their home-movies were taking in was real, and suspected the team wasn’t getting their rightful cut. This prompted a lawsuit against Castle, which was settled without trial. 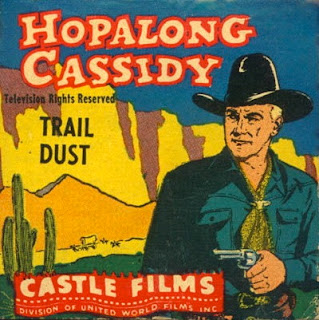 Although there were a few Johnny Mack Brown and Kirby Grant “B” titles from the Universal vaults, most westerns in the Castle catalog in the 1950’s were digest versions of Hopalong Cassidy films, such as BAR 20 RIDES AGAIN and THREE ON A TRAIL. Hoppy was all the rage, and the films that William Boyd licensed to Castle found quick buyers, but the Universal monsters were about to rise from their graves again, hauling a new Castle catalog with them.

The incredible popularity of the older films made the still-living actors, Karloff, Chaney, and Rathbone, stars again, turned Lugosi into an icon, and the characters they had played became part of American folklore. 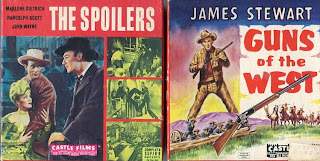 And wouldn’t it be fun to be able to watch a few minutes of TARANTULA, with a cowboy movie, and a cartoon? 8mm mania was raging, with Sears, Penny’s, and even Woolworth’s stocking projectors and screens to fit any budget, and even offering a free Castle film with your purchase. We got the 3-minute edition of ABBOTT AND COSTELLO GO TO MARS, re-titled ROCKET AND ROLL.

Castle unleashed a slew of new horror titles, as well as westerns, comedies, and Woody Woodpecker cartoons, to finally take full advantage of the Universal library.

Audie Murphy was the star of the first two new 8mm digests: THE GREAT GAMBLE, edited from DRUMS ACROSS THE RIVER, and DESTRY, with Murphy and Mari Blanchard. Both are really a composite of action scenes, but GAMBLE pointed to a Castle Films policy of re-titling most of their western releases.

Whether Castle did this to make the buyers think they were getting a new film? Or perhaps, not wanting to compete with the same full-length movies Universal had already sold to television? Whatever the reason, it seems a weird strategy to me, since the whole point of 8mm collecting was to own the movies we already loved.

The westerns marketed with their own titles included: THE SPOILERS, CANADIAN PACIFIC, CARIBOO TRAIL, both with Randolph Scott, RAILS INTO LARAMIE, GERONIMO, THE VIRGINIAN, CHIEF CRAZY HORSE, PALEFACE and Raoul Walsh’s THE LAWLESS BREED. With the exception of SPOILERS, every one of these films had been made in color. They were cut into exciting black and white digests, with the lead flying furiously, but it would take Castle years before they’d make available 8mm color westerns for our living room theaters.

Oddly, they didn’t release Anthony Mann’s great WINCHESTER ’73 under its own title, opting instead for two digests: FRONTIER FURY and GUNS OF THE WEST. These are among the best that Castle offered in any genre. The editing is excellent, with GUNS showcasing the great Calvary/Indian battle that James Stewart and Millard Mitchell stumble into, thanks to Shelley Winters. Young Tony Curtis and Rock Hudson are featured as trooper and War Chief respectively.

Castle’s print quality was generally top-notch, and these two digests show off the care they took in the lab with William Daniels’ superb black and white photography. Another note is that the sub-titles are actual dialog from the film, not narrative descriptions.

Jack Arnold’s RED SUNDOWN got the cut-down treatment in FLAMING GUNS, and a good job of it, too. The digest lays out the plot well, and includes the Rory Calhoun/Robert Middleton brawl, and the final showdown with grinning psycho, Grant INCREDIBLE SHRINKING MAN Williams.

Castle continued to re-title films for years. SHENANDOAH became two 200 footers: THE DEFIANT VIRGINIAN and THE RELUCTANT REBEL. Richard Dix’s oater TOMBSTONE – THE TOWN TOO TOUGH TO DIE was now BADMEN OF ARIZONA. On the lighter side, Bob Hope returned in the second half of THE PALEFACE, now called DR. PAINLESS, while Dean Martin and Joey Bishop cut it up in a nine-minute version of TEXAS ACROSS THE RIVER, titled WHAT, INDIANS? At nine minutes, TEXAS seemed vastly improved. 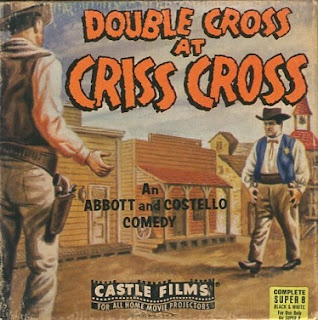 The slapstick shoot-out in WISTFUL WIDOW OF WAGON GAP, with Abbott and Costello, became DOUBLE-CROSS AT CRISS CROSS, and finally, A LADY TAKES A CHANCE was re-named to give John Wayne the top spot: THE COWBOY AND THE LADY.

But the days of the nine-minute silent souvenir of our favorite movies was closing fast. Castle was about to be re-organized as Universal 8, and introducing longer-form titles, in color, sound, and even 3D. Other companies, like Ken Films out of New Jersey that had always lagged behind Castle, were now bringing out Super 8 titles from 20th Century Fox and Warner Brothers, while Columbia and MGM set-up their own home movie divisions.

In this brief time before home video, the Super 8 market was about to go nuclear, before turning into ashes.

Thanks for stopping by, and please join me on Monday, July 15, for PART TWO: SUPER-8 SUNSET.