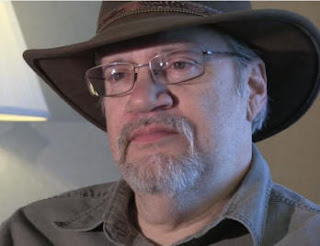 Heads up, everyone! Take a look at the latest winner for the PRESIDENT'S LITERARY EXCELLENCE AWARD from THE READWEST FOUNDATION, INC.! Our very own ROBERT J. RANDISI! Here is a little about the awards and how to submit a nomination, taken from their website, and below that, a short write-up about Bob and the link to his video interview--you won't want to miss this!

Congratulations to you, Bob, and here's to many, many more wonderful books from you.

The ReadWest Foundation, Inc., presents four annual awards: the President's Award, which recognizes a major career contribution to excellence in Western literature; and three (3) Featured Author awards, which recognizes authors with current publications that clearly represent excellence in Western literature. Featured Author awards are given to authors of fiction and nonfiction.
The award winners are selected by the ReadWest Foundation officers and board of directors, and are announced in the summer of the award year. Nominations can be submitted to contact@readwestfoundation.org and must be received by December 31 prior to the year of publication of the author's next work.

Robert J. Randisi is the author of over 600 novels, many of them Westerns, and is the creator of the popular Gunsmith series of adult Western novels. More than 15 million copies of that series alone have sold. One of the most successful Western writers of our time, Randisi has written a book a month since 1982. All of these accomplishments made him an easy pick for this year's ReadWest President's Award.
http://www.readwestfoundation.org/2013_Interviews.html 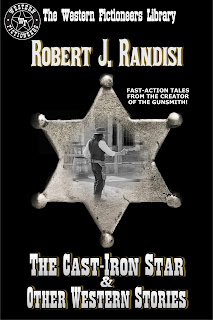 Western Fictioneers is proud to announce that a collection of western stories by Robert J. Randisi is now available.  THE CAST-IRON STAR AND OTHER WESTERN STORIES brings together the finest tales of legendary Western author Robert J. Randisi, creator of The Gunsmith series. As one of the most prolific Western writers of all time, Randisi brings his trademark fast pace and flair for action to the stories in this volume, which include "The Cast-Iron Star", "The Story", "Three-Handed Winter", "Dancing on Air", "A Tall Man Hangs From a Short Rope", "The Knights of Liberty", "A Bad End", "Blood Trail to Dodge", and the original, novella-length version of "The Ghost With Blue Eyes". THE CAST-IRON STAR AND OTHER WESTERN STORIES is Western adventure at its best.

ONE
The kid looked like he hadn't shaved a day in his life, yet he wanted to be sheriff.
He said his name was Starkweather. He got off the noon stage, looked around, then turned to catch his bag when the driver dropped it down to him. Without saying thank you, he mounted the boardwalk and started for the hotel, which he'd spotted from the window of the stage on the way in.
"Help ya?" the desk clerk asked.
"I need a room."
"How many nights?"
"I don't know," Starkweather said. "Let's start with one."
"Okay."
Starkweather signed the register and accepted his key. He went upstairs, dropped off his bag, then came back down and presented himself at the desk again.
"Help ya with somethin' else?" the man asked.
"Which way to City Hall?"
"Out the door, turn left, three blocks. Brand-new building."
"Much obliged."
"Uh. . ."
"Yeah?"
"You mind if I ask why you want City Hall?" the clerk asked. "Most folks ask for a saloon, or restaurant, when they first get into White Rock."
"I'm applying for the sheriff's job."
The clerk started to laugh, but something in the kid's eyes stopped him. As soft as the kid's face looked, there was nothing soft about his eyes.
"Something funny?" Starkweather asked.
"Huh? Uh, no, it's just that—well, the mayor's been wantin' an older man . . . you know . . . with more experience."
"Has he had any luck getting one?"
"Uh, no, not up to now."
"Has anybody volunteered for the job?"
"Not that I know of."
"Maybe that'll make a difference," Starkweather said. "Thanks for the directions."
The clerk watched the young man leave the hotel. He wondered how all fired anxious he'd be for the job if he knew about the Jacob Gang.

* * *
"Mr. Mayor?"
Mayor Harold J. Galvin looked up at his secretary as she stuck her head in the door. It wasn't a very pretty head, but then Mrs. Galvin had personally chosen her for the job.
"Yes, Mary?"
"There's a, uh, young man here to see you."
"About what?"
"About the, uh, sheriff job."
"Well, show him in, Mary," Galvin said. "It's not like we've had a lot of luck finding somebody who even wanted to interview for the job."
"But sir . . . "
"What is it, Mary?"
She lowered her voice and said, "He's very young."
"Send him in, Mary," Galvin said. "If the boy wants the job he should at least be heard out."
"Yes, sir," she said, and thankfully withdrew her head. He'd asked her to address him that way because the only thing worse than looking at Mary Conklin's head was looking at her whole body, too.
Galvin stood, straightened his jacket, tugged his vest down over his significant paunch and waited for his candidate for the sheriff s job to enter his office.

* * *
When Starkweather entered the mayor's office, he saw a thick-set man in his fifties in a three-piece suit, with gray hair and mustaches, standing behind his desk.
Mayor Galvin saw a young man of medium height, not overly impressive-looking despite the gun on his hip, who looked all of twenty-two or -three.
"Mr. Mayor?" Starkweather asked.
"That's right, son."
"I understand you have a job opening for a sheriff?"
"Right again, but—"
"I'm here for the job."
Galvin stroked his facial hair a time or two and then said, "Have a seat, son."
"The name is Starkweather," the young man said, but he sat, as invited. The mayor lowered himself into his own chair.
"Do you have any experience, Starkweather?"
"Not as a lawman."
"As what, then?"
"I can track."
"Why do you think that's important for this job?"
"Because you want your sheriff to stop the Jacob Gang," Starkweather said, "and to do that, they have to be tracked."
"So, you know about the Jacob gang?"
"Yes."
Galvin sat back in his chair.
"What makes you think you can find them?"
"Like I said," Starkweather replied, "I can track."
"And when you find them? What makes you think you can handle them?"
"I guess I won't know if I can until I do find them."
"Son—"
"Starkweather."
"Starkweather," Galvin said, "this job calls for an older man, with experience—"
"How many have turned the job down, Mayor?"
"Well, there have been a few—"
"How many are lined up asking for it?"
"Well, none—"
"How much longer do you think the Jacob Gang can go unchecked?"
Galvin frowned. "You're from back east, aren't you?" he asked.
"What's that got to do with anything?"
"So—Starkweather—"
"Mayor," Starkweather said, "I believe I have the one important qualification for this job."
"And what would that be?"
Starkweather stood up.
"I want it."

And if you want it, read the rest of this exciting story in THE CAST-IRON STAR AND OTHER WESTERN STORIES by Robert J. Randisi. Trade paperback $12.99 E-book $2.99  Available at Amazon, Smashwords, and at B&N.

nook
Posted by Cheryl Pierson at 1:00 AM