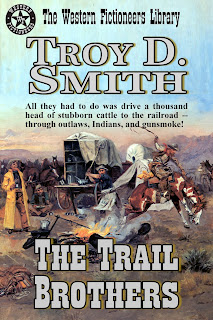 The legendary days of the cattle drive era come to vivid life in THE TRAIL BROTHERS by award-winning Western author Troy D. Smith. This classic novel follows a group of cowboys, young and old, as they push a thousand head of stubborn cattle north from Texas to the railhead in Kansas, encountering Indians, outlaws, and a vengeful lynch mob along the way. If they manage to survive the dangers that dog their trail, by the time they return to Texas they truly will be brothers for as long as they live.

Troy D. Smith is a past winner of the Peacemaker and Spur Awards, and current president of Western Fictioneers. He teaches American Indian history at Tennessee Tech University. Smith is one of the most highly regarded young authors of Western fiction, and this compelling, action-packed novel is a good example of why he has that reputation. For a great yarn, saddle up and ride with THE TRAIL BROTHERS.

nook
Posted by Livia J Washburn at 1:00 AM