Review Roundup With Kathleen R. Adams: Bent, but Not Broken 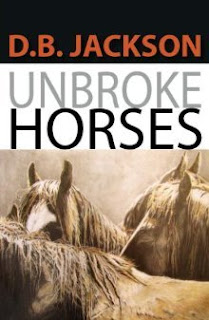 Near the end of the Civil War, two Confederate deserters embark on a killing spree that takes them all the way to Montana. There, after casually recruiting a mulatto who never speaks, they leave a reclusive widower for dead before forcibly conscripting a preacher’s 14-year-old son. Under the gang’s cruel tutelage, the boy quickly hardens, surprised to find within himself an awakening desire to exchange his soul for power over life and death.

Winner of the Western Heritage Wrangler, the Will Rogers Medallion, and the Western Fictioneers 2013 Best Western Novel awards, D.B. Jackson’s Unbroke Horses is relentlessly brutal and graphically violent. Purely devoid of humanity, the three outlaws are sociopaths of the worst order. Though perhaps technically insane, they’re far from mindless. Each is fully cognizant of his actions; cold, calculating, and without conscience. More than showing their young prisoner how to kill, the derelicts teach him to hate.

For two-thirds of the book, Jackson renders resolute sadism in raw, gory, unflinching detail. Even when the boy, Matthew, briefly escapes the tiny impromptu army, the horror continues. Matthew lives an equally wrenching nightmare as he struggles to survive in the mountain wilderness alone, unarmed, and hunted. He accepts recapture with as much relief as resignation.

Matthew serves as the lynchpin for the story, but until the final third, the book is more sweeping western epic than coming-of-age tale. A sizable ensemble cast weaves in and out, providing readers with some — but not much — respite from Matthew’s ordeal. A posse, Matthew’s widowed mother, the left-for-dead recluse, cowhands, and the people of a postage-stamp-sized town all suffer to varying degrees at the hands of the gang. What doesn’t kill the few bystanders who survive makes them stronger, though they’ll carry physical and emotional scars for the rest of their days.

Readers, too, will be scarred by this book. Jackson’s straightforward, omniscient style has been compared to Elmer Kelton’s and Louis L’Amour’s. Narrative passages render the countryside achingly beautiful, making the vicious action sequences that much more excruciating. Echoes of Ernest Hemmingway — who never met an “and” he didn’t like — push readers forward even when they’re sure they’d prefer to avert their eyes.

Wholly deserving of every award it has won, Unbroke Horses cannot be called a pleasant read. Gut-wrenching, yes. Entertaining, yes. Satisfying, yes. Ultimately uplifting and restorative, the journey is worth the pain.


Kathleen Rice Adams is a Texan, a voracious reader, a professional journalist, and a novelist in training. She received a review copy of Unbroke Horses from the author. Her opinions are her own and are neither endorsed nor necessarily supported by Western Fictioneers or individual members of the organization.