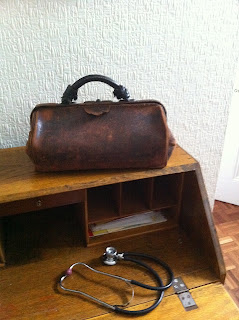 Doc Galen Adams was really adept at digging out bullets. With his spectacles perched on the end of his nose, his sleeves rolled up, a look of intense concentration and a bit of fiddling with a forceps he would deposit yet another slug into a metal tray. The same scenario has been played out in countless novels and movies over the decades.

Not all doctors are portrayed as benevolently as Doc Adams. Some are hardened drinkers, who either need to be revived with a bucket of water, or fortified with a good drink. Doc Willoughby (played by Ken Murray), in The Man Who Shot Liberty Valance is a doc of the latter school. He is called to see Liberty Valance after he has been shot. He calls out: "Whiskey, quick!"

A willing aid appears with a bottle, which the good doc puts to his lips and takes a hefty swig. Thus, restored and ready for action, he turns Valance's body over with his foot, then announces: "Dead!"

The Minie bullet
A few blogs ago, Matthew Pizzolato showed us some Minie bullets, found on the Civil War battlefields. What an advance that was on the type of balls that were used in earlier times. The Minie ball was the brainchild of Claude-Etienne Minié, a French Army officer. He invented the Minie ball in 1847 and soon it enhanced the accuracy and the ability to maim and kill. Essentially it is a muzzle-loaded, spin stabilised bullet. It was made slightly smaller than the bore of the weapon. Its hollow base would expand so that it would fit the spiral grooves of the bore. Its head was conical, so it cut through the air at higher velocity.

They made a mess when they hit a person. Inevitably, out of necessity, War service increased the surgical expertise of surgeons on both sides. And of course, after the War this meant that many doctors who went west would have considerable experience in removing the various types of bullets.

Digging it out
This description is in keeping with the stoical nature of the good folk that we see depicted in novels and movies. But actually, even in the days of the old west, surgeons tried to remove bullets in the most efficient and least painful way that they could. I will be dealing with pain and anaesthesia (that's how we spell it over this side of the Pond), so for now I'll simply talk about the surgical process.

Hippocrates, the father of Medicine advised doctors to 'first, do no harm.' He meant, don't make the patient worse off through bad or incompetent treatment. This is certainly the case in the treatment of bullet wounds. You don't dig, but you assess, then locate, then remove, having as clear an idea as possible of the anatomical structures in the vicinity, which may have been damaged by the bullet, or which could be damaged in its removal.

Note the wooden handle on the scalpel. Pre-sterilisation days

The assessment took into account the clothing and the wound itself. Clothes or anything that was in the bullet's path could be lodged inside the body. Some materials caused more problem than others. Indeed, Dr George Goodfellow, whom we shall come to in a moment, studied materials and bullet wounds and considered that silk could be a potential material for making bullet-proof vests. He even wrote a paper on it, entitled 'Notes on the Impenetrability of Silk to Bullets.'

Bullets were felt for by inserting a finger into the hole and prodding. We shudder at this nowadays, but there was no concept of microbes until the end of the  century. Indeed, a bullet would be pretty well sterilised as it came out of a gun, thanks to the immense heat that was generated. The risk of infection was actually increased by the surgeon's probing fingers.

Surgeons used a variety of probes and  forceps to locate bullets and to retrieve them.

The Nelaton bullet probe  was a French design. It had a porcelain knob at the end. When it came in contact with a firm object, it was rotated against it and withdrawn. If it was a bullet it would leave a lead mark on the porcelain. If it did not then there was a strong likelihood that it was a fragment of bone and the search had to continue.  Remember there were no such things as x-rays and so the doctor had to build up a picture of what had happened as the bullet went through the body.


Some extractors had a screw, so that they could be screwed into the soft lead to remove it. Others had a sort of spoon that could be passed beyond so that they could scoop the bullet as it was withdrawn. Others could be passed beyond the bullet and then rotated so that a hook-like end-piece could pull on the far end of the bullet, allowing it to be retrieved. And a whole variety of forceps were developed. In general they had long thin blades with serrated ends to grasp the end of the bullet. But of course, often other instruments could be adapted for the task, including dental or gynaecological forceps. 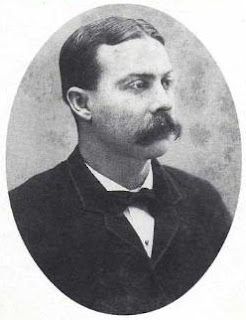 The doctor who achieved greatest fame with regard to bullet wounds was Dr George Goodfellow (1855-1910). He was a remarkable character; a doctor, naturalist, writer and intellectual. He became the acknowledged expert on gunshot wounds, as well as a pioneer in other types of surgery. He was no shrinking violet, however, but a man of his times. He would gamble, drink and on occasion, fight. Indeed, he had been the boxing champion at the US Naval Academy (from which he was dismissed) before he took up the study and practice of medicine.

He is famous as the doctor who treated both Virgil and Morgan Earp after the Gunfight at The OK Corral. Some months later he had to operate on Virgil again, after another gunshot wound, this time removing three inches of his left humerus. And a few months after that he performed a post mortem examination on the body of Morgan Earp, who was fatally wounded in Tombstone.

Dr Goodfellow shared his expertise in papers that he published in the medical journals. His paper, Cases of Gunshot Wound of the Abdomen Treated by Operation, published in May 1889 in The Southern California Practitioner is an erudite account of several cases that he personally treated.

His descriptions are excellent and he describes the exact path of the bullet in each case, describing the anatomical structures that had been damaged, and outlining how he treated them. He details how he closes intestinal holes, mesenteric vessel damage, liver tears and liver holes. He even talks about repairing the rectum in one case

But by this time he had absorbed the scientific discoveries that had been made and he understood the need for sterility in the operation. He talks about this in one case.

"At the time of operating in '81-82 I used Lister's method in its entirety. The intestines were sutured with gut; and in my cases the continuous Glover suture was used. In Mathews' the silk interrupted."

[A Glover's suture is a means of bringing together two surfaces of a wound by making a continuous suture, with each stitch passing through the loop of the preceding one. When he talks about Mathews, he is referring to a Dr Mathews who had operated on another case. Matthews used individual sutures or stitches. It is the surgeon's individual preferences]

Caliber of bullets
He talks at some length about the type of bullets and the damage that they do. He mentions that the caliber of weapons and the amount of powder behind the ball is greater in the West than the East.

"the 44 or 45-caliber Colt revolver, cut off or long, with the 45-60 and 44-40 Winchester rifles and carbines, are the toys with which our festive and obstreperous citizens delight themselves; and it may be stated as a truism that, given a gunshot wound of the abdominal cavity with one or other of the above caliber balls, if the cavity be not opened within an hour (I here put a very long limit on the time to be allowed) the patient by reason of hemorrhage is beyond any chance of recovery, and this without anything injured of greater moment than vessels of capillary size or a trifle larger, in either mesentery or intestines. With smaller caliber balls, 32 downward, there may be more propriety in waiting, and the smaller the ball, the more advisable it may be. Any ball from 32 up may be expected to inflict damage enough to necessitate immediate operation; at least such has been my experience."


A surgical rule of thumb
He also makes a broad distinction between upper and lower abdominal wounds.

"With wounds of the pelvic portion of the abdominal cavity more time is accorded the surgeon in which to make up his mind, and he can more justifiably act upon the laissez faire principle. Even here too much waiting proves disastrous in a majority of instances, and it is usually found when too late that surgical interference would have been advisable. Barring the cutting of a considerable vessel in the lower cavity there is no danger of immediate death from hemorrhage. The danger usually lies in the subsequent inflammatory action  caused by fecal or urinary extravasation from wounds of bowel or bladder. Even where these are wounded, death is by no means inevitable without surgical interference. In these cases, however, the nature of the wound and the gravity of the symptoms must be the surgeon's guide. The same may be said of wounds of the extreme upper portion of the abdominal cavity which chance to pass the hemorrhagic stage without interference. I can just now recall but one that I have ever seen do so; and she must have been bullet proof to have stopped a 45-caliber Colt pistol ball with her stomach.

"This is the exception. The rule is that wounds of the abdominal cavity produce death immediate or remote, generally immediate."

[In other words, you can delay perhaps with lower abdominal wounds, but never with upper ones. Surgery is needed]

"I feel more than ever that a surgeon who delays longer than for necessary preparation is guilty of criminal neglect. A 44-40 or 45-35 Winchester pistol bullet through the abdomen gives no chance for life. Death is the inevitable result, usually within an hour. And the laity need no learned dicta upon this point, particularly those who live by the pistol and die by the pistol. Their maxim is "shoot for the guts", knowing that death is certain, yet sufficiently lingering and agonising to afford a plenary sense of gratification to the victor in the contest."


Writing as Clay More, Keith Souter  is currently writing his series of ebooks about  The Adventures of Doctor Marcus Quigley, dentist, gambler and bounty hunter, published by High Noon Press.  The third in the series The Covered Trail is due today, June 27th. 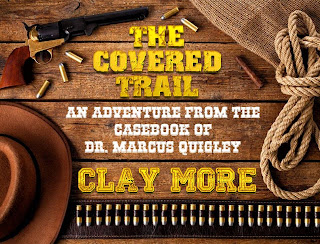 His latest project is a novel about Dr George Goodfellow, entitled The Doctor for the West of the Big River series, published by Western Fictioneers.
Posted by Keith Souter at 3:00 AM