Sometime back I mentioned that I had several short stories that I number among my favorites, but that I wanted to talk about three in particular. I've previously discussed Dorothy Johnson's "The Last Boast" and Ed Gorman's "The Face"... today I'm talking about James Reasoner's "The Wish Book" (though I have since thought of at least one or two others I want to highlight in the future.)

"The Wish Book" features Reasoner's Texas Ranger hero, Cobb, who has appeared in several short stories -including "Rattler" in WF's The Traditional West, and "Presents for One and All" in Six-Guns and Slay Bells.

This particular story first appeared in 1996 (I think), in the audiobook How the West Was Read (Robert J. Randisi, ed.), read by George Kennedy. I missed that one; I was introduced to the story a couple of years later when it appeared in print, in The Best of the American West (Ed Gorman and Martin H. Greenberg, eds.) The story was one of those that stuck with me for years afterward -not just for the taut plot, but for the dark mood the author created.

Texas Ranger Cobb is delivering a prisoner, a brutal killer named Spivey, to his hanging. They have become enveloped in a thick fog, from which they hear gunfire and screams. They take refuge in a line shack, only to discover they have entered a world of madness. The three cowboys staying at the shack have been isolated so long it has driven them insane, and they are engaged in a bloody feud over the most priceless possession they have: a mail order catalogue, or "wish book." Each man has picked out the object of his own desire within its pages, and is willing to kill his partners to have it all to himself.

While Cobb is occupied with his own efforts not to be killed by the lunatics, and to stay alive without hurting them if possible, his murderous prisoner escapes. Now Cobb has four killers loose in the fog to contend with.

I won't tell you any more beyond that, you'll have to read it for yourself. It is included in Reasoner's short story collection Texas Rangers, available at amazon and barnes & noble . 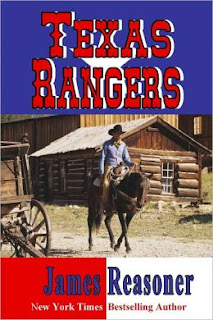