Kern County, California, where I was born, the first prune picker in my family who hauled out of the dust bowl in 1936, is the Oklahoma and Texas of California. She lays in the south end of the world's most productive agricultural valley which provides ½ the country's fruits and vegetables, and Kern is the state's number one producer of cattle and sheep. She also, at least until the Bakken field in Montana and No. Dakota was developed, harbored four of the ten most productive oil fields in the U.S.

When I would travel a hundred miles south to Los(t) Angeles, usually in cowboy boots, I would often be asked "Where in the south do you come from, country boy?" A funny question coming from a city which a century and a half before enlisted 3,000 in the Confederacy including one general and six colonels, and only 3 in the Union. My, how times have changed.

A fellow I wrote about, Edward Fitzgerald Beale (see Rush to Destiny), was instrumental in keeping California from going with the south during the "recent unpleasentries," when he convinced Lincoln that if he imposed the draft (conscription) in California that she would bolt and join the south. He didn't, she didn't. Consequently California was the ONLY Union state not to have conscription. Beale was the most unsung hero from the Manifest Destiny period…but I digress. However, if you'd like to learn more about a fellow about whom Kit Carson said, "I can't believe this guy Ned Beale," take a look here: http://amzn.to/RAnz1G

This blog is about cooking, however no cooking is more indigenous to the south than deep pit, and probably none is more delicious.

Kern County has some of the great BBQ traditions which came via Model A's, along with lots of displaced folks, directly from the south during that dust bowl. It vies with Santa Maria in Santa Barbara County for great BBQ and deep pit tradition, so I grew up with it, and am damn glad I did.

That said, how many of us have the time to dig a pit in the back yard, build an oak fire and let it burn down to coals, season then wrap,wrap, wrap a chunk of beef (or whatever) in wet burlap, and drop it in the pit, cover it up, and let it cook overnight…then dig it up, unwrap it, try to keep the ashes, dirt, and rock chips out of it, and only then serve it up.

I am here, riding to your rescue.

In this recipe your oven becomes that deep pit…no shovel required. 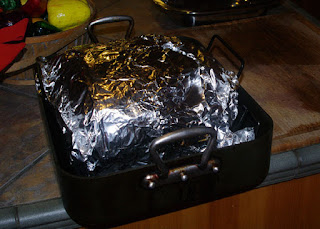 < Place on a rack over a tray or pan in the center of a 200 degree oven and slow cook for 12 hours. I've had folks—men, women, and children—average over a pound of meat apiece when they dig into his succulent, fall-apart, deep pit chuck. Don't plan on leftovers. I serve with beans, crusty bread, and a green salad. 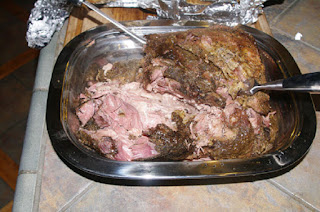 See you soon for more from The Kitchen at Wolfpack Ranch and Cooking Wild & Wonderful.

Here's a link to my cookbook: http://amzn.to/VusuAW