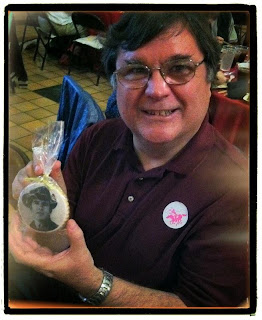 It seems as if everything I post makes reference to FAMOUS MONSTERS OF FILMLAND magazine, and don’t dream that this one will be any different. For a movie kid in the 60’s, Forrest J. Ackerman’s magazine was a touchstone, introducing us to actors and films long-forgotten, and getting us excited to see them for the first time on TV on our local “Shock Theater” or The Late Show.

In 1960, FAMOUS MONSTERS was such a runaway success, that publisher James Warren was bursting with ideas for a follow-up. He was already re-launching horror comics in a black-and-white magazine format with CREEPY and EERIE, and later, their super-sexy cousin, VAMPIRELLA.

But what else could be done for the movie fans? Drug store magazine racks were heavy with monsters, with the rest of the space saved for MOVIE MIRROR and its gossipy cousins. Warren considered a lot of ideas, and put a few into production, including SPACEMEN, and MONSTER WORLD, but they seemed aimed at a target that Warren was already hitting.

Who he was missing were the adults, and they were watching westerns.

In 1960, John Wayne was marching into another decade as a top ten of box office stars, thanks to THE HORSE SOLDIERS and NORTH TO ALASKA, but at the same time, Robert Mitchum, James Stewart, Kirk Douglas, Richard Widmark, and Burt Lancaster were all hitting the saddle in major studio westerns, scoring major hits.

The “new kids,” Steve McQueen, Paul Newman, James Garner and even Elvis were hitting the trail with a vengeance, and it was only a few years away that the lanky co-star of RAWHIDE would travel to Spain to make the little movie that would change westerns forever.

Hoppy, Roy, and Gene were still part of our after-school afternoons, thanks to syndication, along with the real Masked Man, while Mom and Dad had their choice of more than twenty prime time westerns, including THE TALL MAN, EMPIRE, RIVERBOAT, THE RIFLEMAN, MAVERICK, CHEYENNE, DEATH VALLEY DAYS. BONANZA, and of course, GUNSMOKE.

There was no end to playsets, cap pistols, and cowboy outfits, rubber tomohawks, lunchboxes, coloring books and drinking glasses, all featuring our favorites.

It just didn’t stop – so what better time than now to put FAMOUS WESTERNS OF FILMLAND on the newsstands?

The problem was the competition was beyond fierce.

Westerns were also thriving in comic books and newspaper strips, with Marvel’s KID COLT OUTLAW, TWO GUN KID, and RAWHIDE KID, shooting it out with DC’s more serious titles, like Joe Kubert’s FIREHAIR. The independents were still giving us Lone Ranger, Tonto and Zane Grey four-colors, with those spectacular painted covers, and poor old Charlton Comics was having their run of BILLY THE KID.

If you weren’t allowed to stay up to watch THE IRON HORSE, it didn’t matter, since almost every TV show had it’s own book courtesy of Dell or Gold Key. And, once every couple of weeks, you got a comic book adaptation of a western movie, not to mention all those reprints.

That’s a lot of cowboys, and a lot of horse sh*t to pile through; so how could a magazine aimed for the same audience that was spending their nickels for everything else western set itself apart?

From the start, publisher Warren, and editors Harvey Kurtzman and Forrest Ackerman put their foot right in the pile. Kurtzman was a veteran of MAD MAGAZINE, and a cartoon genius of the first rank, and who better to devise an offbeat, comedic look at westerns, with parodies of all the old favorites?

Truthfully, almost anyone. The problem wasn’t a lack of talent from Kurtzman, it’s that the approach never should have reached the printing press.

The cover of the first issue of FAVORITE WESTERNS OF FILMLAND is almost staggering it’s so awful: a color shot of Richard Boone as Paladin, with a bloody bullet hole between his eyes, with the girl asking via dialog balloon if he’s feeling all right. Amazing. 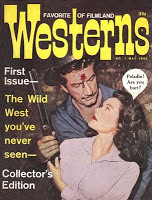 The funny balloon over the movie still format was in wide use at the time, inspired by the television success of Jay Ward’s FRAKTURED FLICKERS, where serious silent films were given the jokey dialog and sound effects treatment. Usually, it was the monster magazines that took this approach (MAD MONSTERS, MONSTER LAFFS), but to go this way with a magazine to capture the western movie audience was astoundingly wrong-headed; you don’t make fun of our heroes.

The sales on the first issue were already cooked and served by the time the Number Two was going to press. But Warren and Kurtzman must have felt something of the fan backlash, making fun of the most popular genre around. They eased off on the funny in the second issue, that featured a wonderful Jack Davis caricature of Duke from RED RIVER as its cover. 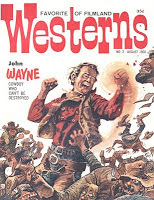 There were funny captions in a piece on THE FIGHTING KENTUCKIAN, but straight stories on the making of the THE ALAMO, as “Duke’s next.” This stuff was straight from the publicity department, as was a feature on Clint Walker’s exercise routine while shooting CHEYENNE. Clint looks great doing his sit-ups, but the piece tells precious little about the hit show.

There was also a nice promo piece on the “current hit,” GUNFIGHT AT THE OK CORRAL, which was being re-issued by Paramount. The articles were flimsy, but had finally started to treat the movies with some respect, especially as they banged the drum for new releases.

One of Forrest Ackerman’s trademarks in FAMOUS MONSTERS was his constant use of puns. Dr. Akula from Horrorwood, Karloffornia couldn’t help himself, and he and Kurtzman created a character to act as host of FAMOUS WESTERNS, answer reader’s questions and letters, and be a trademark for the magazine ala Uncle Creepy or Cousin Eerie.

And so, Ramuda Charlie was born.

Charlie’s awful “yer darn tootin’” editorial comments are cringe-worthy now, but must have tickled Ackerman and company. Thankfully, the character became less prominent as FAVORITE WESTERNS started to go through some major changes.

Jack Davis drew Dennis Weaver as Chester, facing down Matt Dillon, as the cover of issue #3, declaring he wasn’t going to be “swabbin’ no more jail cells,” while the magazine declared its new name: WILDEST WESTERNS. 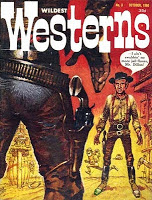 Harvey Kurtzman was easing back on his duties as editor, and the tone of the magazine started its shift with this issue. The funny dialog balloons were being replaced with pieces that were more serious, including “Jesse and Billy, Where Are They Now?” which was one of the first articles they ran detailing the lives of historical figures.

There was also a little stuntman profile that was behind-the-scenes stills, a look at CHEYENNE for the coming season, and a profile of “B” hero Whip Wilson. The “Last Minute Noose” page, about upcoming westerns, touted that Henry Fonda would actually start appearing in more episodes of THE DEPUTY, and hinted at a money conflict with Universal; none of this was the usual stuff we’d come to expect from WESTERNS, and the next issue would show us why.

Sam Sherman was a young film journalist, with an abiding interest in “B” movies, especially serials, who had been contributing to a number of Warren magazines when he was tapped to become editor of WILDEST WESTERNS. Later, Sherman would found Independent International Pictures and produce flicks like the biker hit SATAN’S SADISTS, starring Russ Tamblyn, and Lon Chaney’s last, DRACULA V. FRANKENSTEIN.

Sherman was a true western lover, and his influence is all over issue #4, the last to feature a cover by the great Jack Davis. The cover is an oddity; funny, with Lee Marvin in a police car, chasing down a cowboy, having wandered over from the set of M-SQUAD.

If the cover was an echo of Kurtzman, the rest of the issue purely for the serious western lover, starting with Sherman’s own interview with Buster Crabbe. There were on-set pictorials for YELLOWSTONE KELLY and THE COMMAND, and a nice look at Yakima Canutt’s horse training techniques. Sherman also paid attention to the many western film conventions that existed in those days, noting the appearances of sidekick Max Terhune, and upcoming events.

And as a bonus, artist John Severin (SGT. FURY AND HIS HOWLING COMMANDOS) contributed a beautifully rendered piece on gunfighters. WILDEST WESTERNS had taken a turn for the better, and the next issue would be another improvement for fans.

The great Basil Gogos, renowned for his amazing cover paintings for FAMOUS MONSTERS, created a portrait of Nick Adams as THE REBEL for issue #5, to accompany a good feature article on the show. In the piece, the writer speaks to Adams, and REBEL producer/writer, Andrew Fenady. 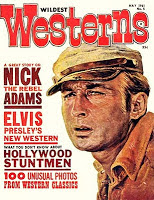 This issue contains the obituary for star Ward Bond, and an interview with Republic star Bob Livingston. Sam Sherman was leaving his imprint on the magazine, which was gearing more and more toward the serious western movie fan, particularly if you loved the “B”’s.

Like other Warren publications, the back pages of WILDEST WESTERNS were filled with mail order goodies. Unlike FAMOUS MONSTERS or CREEPY, what they offered was everything western they could grab at the time: paperbacks, 8mm movies, replica guns, and autographed pictures of stunt men.
Although cartoonist Jack Davis would not be doing any more covers this issue advertised a series of prints of Jack’s own take on true western legends, such as Jesse James and Dull Knife. The drawings were finely rendered in pen and ink, with color highlights, and came three in a set for the whopping price of $1.49. 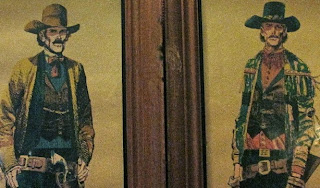 "Two of Jack Davis' drawing offered through WILDEST WESTERNS mail order for $1.49. Jesse James is on the left, and Wild Bill Hickock is on the right; stylized in the extreme, they're still killer!"

Despite the number of westerns in the theaters, and newer shows like THE BIG VALLEY appearing on the tube, WILDEST WESTERNS was failing. Their final issue, #6, was the best issue yet, and showed that the magazine could cover the genre in serious fashion, looking backwards for nostalgia, and at current releases. 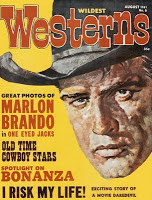 Basil Gogos again painted the cover, and it’s considered one of his finest pieces. The stunning portrait of Marlon Brando from ONE EYED JACKS wads the perfect lead into a preview article about the making of the film. The other major feature was long and detailed coverage of BONANZA, followed by a profile of stuntman Herb Holcomb, and nice pieces on neglected cowboys stars, such as Buddy Roosevelt and Buffalo Bill, Jr.

Once again, WILDEST WESTERNS was bearing the stamp of its editor, who maintained a balanced focus on “B” heroes, television, serials, and The Duke. The magazine had hit its stride, and it’s end of the trail.

James Warren still believed in a movie magazine about genres other than horror, and took another shot with SCREEN THRILLS ILLUSTRATED, also edited by Sam Sherman. THRILLS embraced all types of action and adventure movies, serials, television and even radio. Westerns were included in every issue.

SCREEN THRILLS lasted 11 issues, almost double the run of WILDEST WESTERNS. When it folded, and attention went back to the monster magazines, writing about western movies was soon relegated to the fanzines and special publications produced by experts like Alan G. Barbour, if you could find them.

But for a brief time, if you loved westerns, all you had to do was wander into your local candy store or supermarket, to there would be a new issue of WILDEST WESTERNS, pages filled with heroes, sidekicks, ladies of the west, and some of the baddest bad men ever known, and all for thirty-five cents.

That’s about the cost of a shot of whiskey at the Long Branch, and for a young kid who loved westerns, a lot more satisfying.