TWISTS AND SHOUTS: Embracing the Unexpected by Marc Cameron


So, about a month ago, while I was sliding behind my motorcycle down the gravel shoulder of a remote stretch of the Alaska Highway, I thought to myself:

I didn’t see this coming.

I’d spent the previous weeks fretting over things like weather, gear lists, bike maintenance and plotting the next Jericho Quinn novel. Frankly, I’d been obsessing over a particular five-span, open-grate metal bridge that lay about two days into the Yukon Territory. There was no way around it. I knew it would likely be raining this time of year, and with the knobby tires on my motorcycle, I expected crossing the wet metal to be a dangerous endeavor, especially if there happened to be an oncoming truck sharing the bridge. My imagination ran amok and I invented all sorts of scenarios that all ended with me looking something like a squashed bug run through a cheese grater.

Turns out, the suspense I’d let build up in my mind was exponentially greater than the crossing itself. That spooky ol' bridge was nothing but a wiggly-tired bit of road that was a piece of cake to cross—even wet and with an oncoming truck.

Little did I know…but about twenty minutes down the road, a motorhome would pull out in front of me and force me to choose between a Wiley Coyote face plant or the ditch.

Not to get too maudlin, but riding a motorcycle puts you a smidge closer to violent death every time you climb aboard. Just like law enforcement or marriage, that measured air of danger adds to the experience.

I chewed on this quite a bit over the next 2,600 miles as I headed south on Modestine, my wounded (and now held partially together with Gorilla Tape) motorcycle—and about the comparisons to writing.

Each time I pick up a book, I expect it take me on a journey. I don’t want it to be “normal life”—I want to escape. I write Thrillers now, but I wanted my Westerns to be the same. The books I like to read, and strive to write, put a knot in my stomach that grows with each passing page. I like a clear threat or deadline looming in front of the protagonist—something to worry about. But I love a delicious plot twist that sneaks up on me like a wrecking ball out of nowhere—especially one where I smack my head and say: man, I should have seen that coming.

One of the things I loved about my career with the US Marshals were all the unexpected moments. I got a call from my supervisor one day to go home and pack for an emergency trip to LA. They needed extra deputies to help with a high threat gang trial. I’d only been to LA once, during the Rodney King riots, and I was excited to go again and work this trial. By the time I made it back to the office, a government witness in case in Hattiesburg had been shot in the face so I was sent that direction instead, to Purvis, Mississippi where I spent the better part of two weeks in the Lamar County Jail, locked in with the three witnesses I was assigned to guard/protect. Not what I had planned, but those days in jail were a fascinating time, with all sorts of research opportunities for a would-be novelist.

While I was stationed with the Marshals in East Texas, my partner and I once had a fugitive warrant for an outlaw biker dude wanted for… I really can’t remember what. I do remember he was supposed to be armed and extremely dangerous. We expected violence, maybe even a gunfight. But along the way, we found that the fugitive had a stripper girlfriend who folks said developed a blotchy rash and spitting lisp when she got angry or nervous—which she would certainly do when we questioned her about her wanted boyfriend. I’d seen plenty of blotchy rashes during interviews, but the whole spittin’-lisp thing intrigued me.

She wasn’t something we’d expected, but frankly, we started looking for her harder than we looked for him, because she seemed more interesting. I remember thinking that I was living smack in the middle of an Elmore Leonard novel. The exotic dancer covered in stripper dust with a spittin’ lisp eventually made it into one of my stories. The plain vanilla bad-guy, though plenty dangerous, I have mostly forgotten.

I knew moving two horses from Texas to Idaho with my nine-year-old son would be a grand time. And one of the horses was…a little less than completely trained, so that added to my worry. The horses turned out to be the least of our problems when a freak snowstorm hit Homestake pass outside of Bozeman. The sky had been bluebird-clear just an hour before but now we had eight inches of snow on the highway and I was pulling a load of horses with an underpowered pickup. Several times, I was dead certain that we would loose traction completely and slide backward over the edge. I was scared enough that Ben saw it, which, I’m sure didn’t add to his sense of wellbeing.

In the end, that trip provided my son and me with incredible memories—camping with the horses, swimming in cold mountain streams— He’s pushing thirty now, with two boys of his own. When the trip comes up in conversation, what he seems to remember most, is how they closed the highway and stranded us together in Bozeman for two days, the great adventure of our unscheduled stop and the extra father-son time to talk about life and such.

I never saw that storm coming either, but I’m sure glad it did. 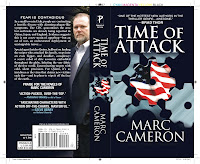 Marc Cameron is a retired Chief Deputy US Marshal and 29-year law enforcement veteran. His short stories have appeared in BOYS’ LIFE Magazine and the Saturday Evening Post. He has published ten novels, six of them Westerns (several as a ghost writer and two under his pen name, Mark Henry).  His present Jericho Quinn series—NATIONAL SECURITY, ACT OF TERROR, STATE OF EMERGENCY and TIME OF ATTACK (February 2014 Kensington) features an adventure motorcyclist, Air Force OSI agent and renaissance man who spends his days sorting out his life and kicking terrorist butt.  Marc lives in Alaska with his beautiful bride and BMW motorcycle.
Visit him at:
www.marccameronbooks.com
http://www.facebook.com/MarcCameronAuthor