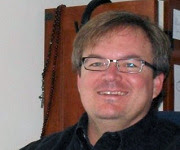 I wish Nik Morton had published Write a Western in 30 Days with Plenty of Bullet-Points (Compass Books, 2013) 20 years ago.

In the fall of 1993, I was barely 23, newly married and living with Trina in Evanston, IL. Three months out of college I had a job in special education, for which I hadn’t been trained, and I had an idea for a Western novel. 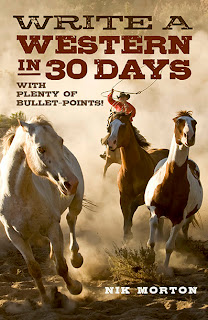 One evening, while I sat in our dining room in Meemaw’s wingback chair, a liquid image—a half-played scene—danced up out of the yellow glare of the recently polished wood floor:

It’s night time in Kansas, and young Seamus runs downhill, terror streaking his face in tears. He’s backlit by the angry orange bonfire that his family’s barn has become, his bald scalp slick with sweat, his trouser cuffs flap-snap above his muddy brogans, one suspender droops off his shoulder, arms pumping, his loose shirt sooty and damp with fear-sweat…

I knew Seamus' family had been killed. I knew his mother had been a freed slave and his father an Irish immigrant. I could hear his sisters screaming through the final moments of their lives in the family’s house just out of Seamus’ reach. I knew Seamus would seek out Sissy and Lila’s killers and take violent revenge and that his acts of retaliation would be brutal and splashed with gore and that he would suffer deeply as a result of those actions.

But I didn’t know how to write a Western. I’d read hundreds, sure, but that’s not exactly the same. Besides, the part of me that stood at the foot of a hill clutching my degree in American lit and creative writing and staring up at a young man racing away from a burning barn, racing toward his dying sisters, careening toward violent retaliation—that part of me was, frankly, far too proud of, far too pleased with the pretty picture I’d just conjured up to really take the time to figure out how to write a Western.

Proud, and also a bit overwhelmed. For all the things I did know about Seamus, there were so many things I didn’t know.

I knew virtually nothing about Kansas. (I’ve since visited.) Nor did I know the year the story took place or the guns or horses or clothing or... As a result, I froze the moment I sat down at my IBM desktop to type up the story. There were far too many unknowns—far too many obstacles--and not the exciting kind, not the mysteries around the corner or over the horizon, not the character-building sort of challenges, but the details and facts that can be the bones of historical fiction and the bane of my brand of fuzzy headed thinking.

Alright, enough about me and Seamus. Let’s take a look-see at Write a Western in 30 Days.

The first thing Morton does is clear away the obstacles by presenting just enough to silence the editor and make room for the muse, while the researcher runs out to grab a double-shot Americano and hit the library. 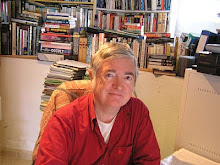 Morton’s introduction pistol-whips topics such as why write a western, the relevance of the western, the importance of avoiding clichés, the origin of the novel form, and whether a novel can be written in 30 days and what exactly constitutes a “day”.

Hint: a “day” is eight hours of work time, whether continuous or broken up. Feel cheated? Well, would you have bought a book entitled Write a Western in 240 Hours?

Actually, I would’ve bought the book with that title.

Oh, so here’s the beauty of Morton’s pistol-whip chapters. He has a brilliant way of condensing a great deal of information into manageable junks without sacrificing clarity or content. The resulting book works both as master course and as a refresher course.

With chapters two through six, Morton slaps a nice sturdy broom in your hand and puts you to work—preparation, research, theme, point of view, and titles. You can sweep fast and kick up a lot of dust or go slowly and run the risk of just moving the dirt around. What I mean by that is that this is not a book rife with navel-gazing. Morton isn’t selling snake oil or tincture of opium for Mr. and Mrs. Maybe I. Will and Maybe I. Won’t. This is work. Fun, but work—a nearly 200 page memo from the boss. Read it and get to work. You can always re-read it later.

And in case you didn’t catch the title, we’ve got a schedule to keep.

Chapter seven is, I suspect, the heart of the book for most readers. Morton, by this point, has referred to the “plot plan” enough that when you finally hit page 72 you feel as though you’ve finally arrived at, if not your destination, at least one heck of a fun way station.

“Writing a novel is much easier if you have a plot to follow,” writes Morton. “It doesn’t mean you’re in a rut. The plot is a rough-and-ready road. As the story progresses, you’ll find that characters will want to take the occasional more interesting byway. Some writers let the characters wander off at a tangent and never rejoin the original plotted road; others are hard taskmasters and bring the character back in line after a fascinating diversion.” 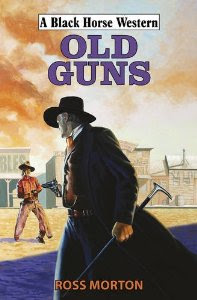 “A story is often about a character’s growth or change through adversity, which is brought about by facing obstacles and overcoming them,” he adds on the next page. “Though sometimes unwelcome, change is inevitable in life; in fiction, change is vitally necessary. The plot provides the means for the character to evolve.”

The plot plan, like life itself, is a “working document” and change is inevitable.

The whole chapter is like that—one beautifully rich paragraph after another.

I do think Morton is crazy not to package this chapter and appendix A: “30-day Countdown” as an e-book single. He’d make a fortune.

After the plot plan, Morton becomes more craft focused—character, dialogue, and description. He looks at form—beginning and endings—and revision—self-editing and layering—and finally offers up some very practical advice on publishers, synopsis, blurbs, and marketing. Theses final chapters on the business were certainly good and definitely up to the high standards set by the first, but I found them—personally—less interesting. Professionally, they are spot on and invaluable.

With the exception of Appendix A, which I mentioned above, the Appendices leaned toward the very practical and, frankly, I’d rather re-read his section on the Code of the West or browse his list of western fiction or western series fiction than read about manuscript formatting or agents.

Part of the reason why I think my 23 year old version of myself would’ve loved this book even more than the 43 year old version does is that by about the third chapter, Morton makes it clear that he has thought of everything. I mean, he hammer-slaps the sub-headings and makes every shot count—from animals to weaponry—and illustrates his points with examples from his own novels.

If Nik Morton taught a course based on this book I’d be the first to enroll and I’d sit up close. But he lives across the Atlantic and that’s a long way away from South Carolina. Fortunately, I have Write a Western in 30 Days, and there’s always Facebook.

One more thing, drawn from Morton’s “Code of the West.” 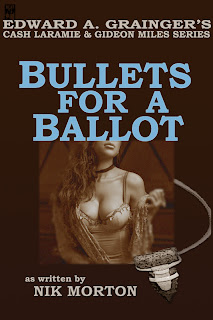 “If a person was in trouble, it was a man’s duty to help him—friend, stranger or enemy… And because of the great distance between neighbors and townships hospitality was generous…”

I, for one, can’t see any reason why this Code needs to be limited just to the West. I wonder what would happen if more and more writers read 30 Days and more and more readers read Westerns?