I'm using our Wolf Creek space this month to let you know what's coming around the pike for our little fictional town. I'll start with the upcoming volumes- release dates are approximate, by the way. Coordinating this many writers, most of them committed to the gills on other projects, makes it hard to be precise.

Everyone knows James Reginald De Courcey as a dapper English artist... but his former gang knows him as Samson Quick, notorious bank robber. He has cut all ties with the Hounds, but they have found him... and will only keep his secret if he agrees to help them pull one more job... 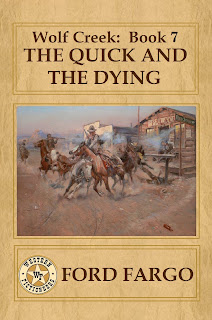 Tsu Chiao, owner of The Red Chamber opium den, makes his move to get revenge on those who have crossed him and leverage in the criminal enterprises of Dogleg City. And he has sent word to his Tong associates in San Francisco to send outside help.. 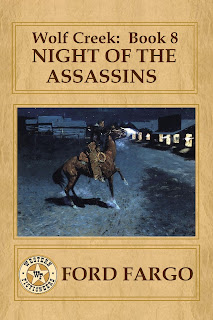 This anthology will reveal further details about some of your favorite characters, and introduce several new ones, as the citizens of Wolf Creek prepare to celebrate the 1871 Yuletide season. 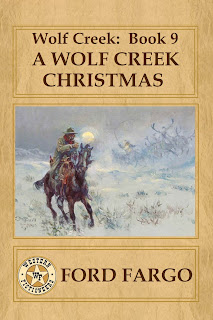 Greedy land baron Andrew Rogers is strong-arming small farmers in Taylor County to sell out, and intends to drive off the citizens of the small Exoduster hamlet of Matthias and take their land. But the people of Matthias have some very determined friends in Wolf Creek...

Andrew Rogers is tired of having his plans hamstrung by the peace officers of Wolf Creek -and his financial backers in Chicago are calling for results. Someone is going to have to die...

You will be meeting some new Wolf Creek citizens in our Christmas volume, and welcoming some new writers onto our project. Here is a brief description of some of those characters (and their creators)...

Roman spent thirty years as a free trapper in the Rockies, but has finally accepted that the day of the mountain man is over. He heard his old friend Casto Haston, now a tanner, is doing well in Kansas due to the buffalo hide trade, so he has come south to try his hand at it. But trouble from his past has followed him...

Gib Norwood owns a large dairy operation not far from town. Originally from South Carolina, Gib has two younger half-brothers -the twins Peter and Paul Norwood -who were not only his father's sons, but were once his slaves.

Hutch is a young farmer, originally from Ohio, who lives in a sod house with his wife and young daughter. He is hard-working abd respectable but -like many people in Wolf Creek -he is haunted by the ghosts of his violent past...

A 40ish widow with the dreams of a reformer and the zeal of a missionary. She is a woman who aims to set things straight, no matter what. Just remember- Phoebe WRIGHT is never WRONG.

And that's only the beginning! We also have several fascinating new supporting characters coming onboard, which will give us material for many stories to come.


Keep your eyes peeled... we're hoping to get Wolf Creek 7 to you ahead of schedule!